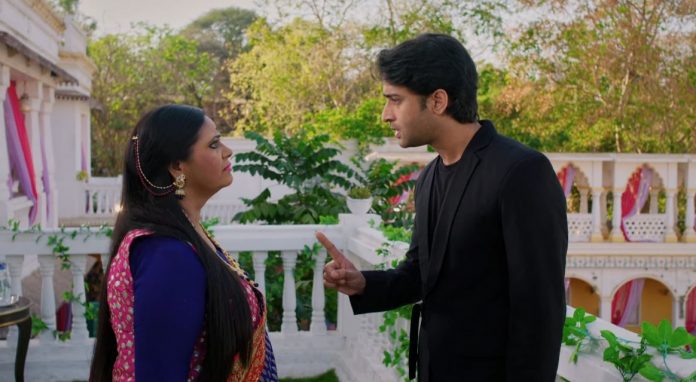 Rishtey Unexpected twist Starplus Huge Challenge for Abir Kunal and Parul unveil the logo of the company. Meenakshi feels much upset like Parul has snatched her rights. The media called by Kuhu upsets the family further by asking Rajvansh family about accepting Kunal and Parul into the family. The media soon learns that Kunal is Mehul’s illegitimate son. The reporters ask Meenakshi if she has happily accepted her Sautan in the family, along with her son.

The sharp questions hurt everyone’s heart. Kunal gets speechless since he didn’t wish his mothers to face such an embarrassing moment. It gets for Maheshwaris to come to terms with the truth. Abir and Mishti try to handle the media. Meenakshi gets angered on Mishti and Kuhu, who ruined the launch event completely. Kuhu defends herself since she didn’t know the media will pose insulting questions. She tries to convince Meenakshi.

Meenakshi feels Kuhu has also back-stabbed her. Kuhu tells her that she didn’t know about Kunal’s decision to make Parul unveil the logo. She adds that her family wasn’t aware of Kunal’s birth truth, they are also in shock, Varsha and Shaurya just regard Meenakshi as Kunal’s mom. Meenakshi doesn’t believe her. She asks if Mishti is responsible for Kunal’s decision. Kuhu doesn’t know if Mishti has influenced Kunal.

She tells that she liked Mishti’s decision to return the company to Kunal, she has no idea about Mishti’s plotting. Meenakshi doesn’t want to listen to Kuhu’s explanation. She thinks the harm is caused and now nothing can fix it, the world knows that Kunal isn’t her son and that’s enough to be a reason for her tears. She is much hurt and wants revenge on Mishti. She forgets that she was threatening Abir to reveal Kunal’s birth truth to the world, and now when the truth is out on its own, she blames Mishti for it.

Mishti wants to know if Abir already knew about Kunal’s decision. Abir tells that he didn’t know it exactly, but he had asked Kunal to get Parul’s rights. He is happy that Kunal publicly accepted Parul as his mother, and now Parul will get her rights in the family. Mishti is also happy for Parul. Jasmeet hears them and misunderstands Mishti. Maheshwaris raise an objection that Kunal has hidden this truth, when they always supported him. Nanu defends Kunal, who didn’t know the truth either. He tells that it was Meenakshi’s decision to hide the truth from them. Vishwamber asks Nanu to share the entire matter with them. He shows understanding.

Meanwhile, Kuhu tells Kunal that Meenakshi broke down into tears and left from the house. Kunal knows she has gone to the temple and goes to meet her. Meenakshi feels sorrowful that she lost Kunal forever. She doesn’t think that he will love and respect her as always after accepting Parul as his mother. Mishti tells Abir that they should have prepared Meenakshi for the situation. Abir tells that Meenakshi would have stopped Kunal and Parul from seeing this day if she knew Kunal’s decision. He knows his mum can manipulate anyone. Mishti agrees that Meenakshi can do anything for her motives.

Jasmeet tells Kuhu that Mishti is behind the incident, she has ruined the launch. Varsha wants to know if Kuhu was aware of Kunal’s birth truth. Kuhu feels sorry to hide the truth. Varsha asks her to support Meenakshi. Meenakshi gets emotional on meeting Kunal. She tells him that she isn’t his mum and he has proved this by shocking her at the launch. She tells that she would have been prepared for this day if he told the decision before. He tells that he has decided this by taking Abir and Mishti’s advice. She tells him that he has left her alone by accepting Parul. She commands him to go away. Abir and Mishti are happy for Parul.

Consequently, Kunal unites with Parul. Kuhu misunderstands Mishti. She wants to confront Mishti for her motives. Parul is thankful to Kunal for giving her the status of his mother, for which she always yearned. Kunal hugs her. Nanu meets Meenakshi at the temple and convinces her to come home. He asks her to be with Kunal and not leave him alone in this moment. He tells that its her right upbringing that Kunal paid respect to his mother. Meenakshi returns home and is hurt to see them. Abir understands her annoyance. Meenakshi can’t afford to lose Kunal. She accuses Abir for always favoring Mishti and breaking the family.

She counts her sacrifices. She didn’t feel that the truth needed to come out. She wanted to hide the past. She feels ashamed that Parul is in her family. Abir asks her not to punish Parul for Mehul’s mistake. She blames Mishti for bringing Mehul in their lives. Abir is thankful that Mishti brought Kunal and Parul’s connection out. He tells that Kunal had to accept his mother, Mishti can’t be blamed always. He wants to support the truth. He challenges Meenakshi to prove him wrong. She wants to bring out Mishti and Kuhu’s ugly relation truth. She thinks Abir will find it difficult to handle the sisters’ fight. She challenges him to stop the coming havoc striking the family.