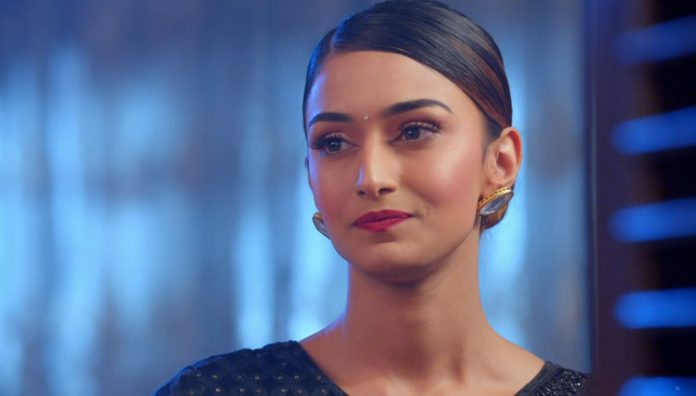 Kasautii Nayi Prerna Starplus Stunner for Mohini Komolika Prerna doesn’t feel scared of Anurag, Komolika or Mohini. She stays strong, calm, composed and determined. She dances with Anurag, which makes Komolika worried. Mr. Bajaj doesn’t let Komolika interrupt them. He asks Komolika if she is scared watching them together that they will unite soon. He tells that Anurag may kill her just like he tried to kill Prerna. Komolika tells him that she isn’t scared of Anurag, he does everything on her orders, he will just obey her, he will never harm her.

She tells that he should know the reality that she owns Anurag, even if she didn’t get Anurag’s love, she is his wife now. Mr. Bajaj finds her crazy. Prerna gets the drinks spilled over her saree. She goes to Anurag and Komolika’s room and comes across their huge photo frame.

She feels bad recalling that Anurag had kept her photo frame before to celebrate their togetherness. She thinks life has changed a lot, Anurag snatched her love and dreams because of his greed for property. She feels sorry that Anurag is responsible for Sneha’s loss. She wants to snatch Anurag’s happiness, peace and life. She thinks Anurag has been much selfish to cheat her in love. She wants to return each and every painful feeling to him. Mohini questions her about coming into Anurag’s room.

Prerna tells that she isn’t scared of her. She asks if Anurag’s marriage with Komolika so fragile that it can break by her coming. She doesn’t feel answerable to Mohini. She stuns Mohini by her strong reply. Mohini can’t believe that she is listening to Prerna’s taunts. Meanwhile, Anurag confronts Mr. Bajaj for bringing Prerna back into his life. Mr. Bajaj asks Anurag not to be much bothered and just deal with them in business. Anurag tells that Prerna should have not come, else her life may fall in danger.

He warns Mr. Bajaj about Prerna. Mr. Bajaj tells him that Prerna wanted to return to the city to settle old scores, he is supporting her, and now she is completely changed. He asks Anurag not to dream of hurting Prerna again. He reminds that Anurag killed his Prerna and now Prerna is just of Bajaj. He asks Anurag not to underestimate Prerna as a weak person, she is much strong to counter her enemies. Anurag shows hatred for Prerna, but helps her when she gets hurt. Prerna bears the hatred from Basus. Prerna gives an answer to Basus and Komolika. Prerna and Anurag think of each other.

Kuki and Kaushik are their best pass time. Prerna feels she is alive because of Kuki’s love. Kuki tells Prerna about meeting Kaushik once again and getting late for the party. Prerna asks her not to think much about him, else she will end up falling in love with him.

Anurag wants to avoid Komolika and keeps Kaushik with him. He gets to hear Kaushik’s love story with Kuki. Kaushik tells that he hates Kuki because of her irritating behavior, he will never fall for her. Basus try to figure out the motive behind Prerna’s return. They aren’t aware of the fact that Anurag tried to kill Prerna. They just know the fact that Prerna left Anurag once again for the sake of Mr. Bajaj’s richness. Mohini tells her daughters that Anurag and Prerna got separated since she left him willingly and went to Mr. Bajaj. She is thankful that Komolika stayed back with Anurag and showed understanding, knowing his past.

Mohini believes that Sneha is Bajaj’s daughter and Prerna took Sneha to him. She tells that its good that Prerna left from their lives. Nivedita tells that Komolika would not tolerate Prerna now. Komolika misunderstands their discussion and punishes Nivedita by banning her in the office. She asks Nivedita to rest at home. Komolika tells Anurag that Ronit will be taking revenge on Prerna, they need not worry for her. Anurag gets alert and plans to stop Ronit from harming Prerna.