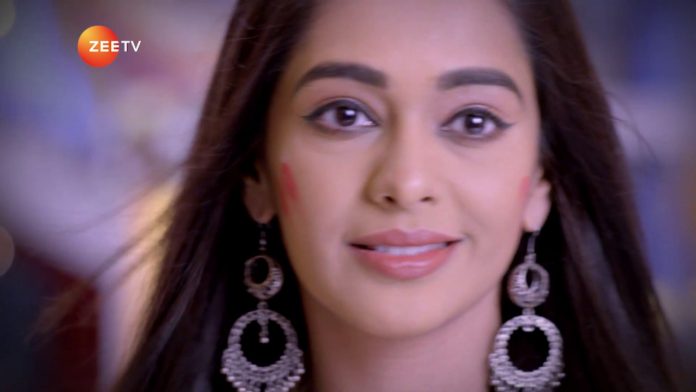 Kumkum Futile Bhagya Prachi Ranbir lose out again Sarita wakes up Ranbir and tells him that Prachi has recorded Maya’s confession. She tells that they shall go and check the video. She calls Shahana and asks her to call Prachi and family for a discussion. Kohlis get to know that Prachi has got the confession video. They praise Prachi and want to check the video. Aaliya learns about Prachi’s clever move and acts to be proud. Pallavi gets angry on Ranbir for getting too drunk.

Dida tells them that Vikram and Abhi also drink bhaang on holi. Sarita asks them to check the video first. Prachi is shocked to see the video missing in her phone. Ranbir finds Prachi lost and thinks what’s the matter. Prachi recalls Ranbir’s confession. She doesn’t want Pallavi to see Ranbir’s proposal video. Pallavi tells that there is no such video that could help Ranbir. Prachi thinks that someone has deleted the phone when she fell down. Aryan tells that there is no memory card in her phone. Prachi tells that she is sure of the recording saved.

Aryan suspects Aaliya since he had seen her around. Aaliya excuses herself for her work. She acts to support Ranbir and Prachi. She doesn’t want Prachi to get close to Ranbir. She isn’t worried for Maya and Ranbir’s alliance. Aryan confronts her for stealing Prachi’s memory card. Aryan denies it. Prachi thinks no one will believe her once again. Ranbir tells that its not her mistake. She fears that his family will be upset on her. She doesn’t want him to get close. She apologizes to his family. Ranbir tells that someone would be after them from Chobey’s family. Sarita tells that she has also seen someone. Prachi appears rude.

She tells Ranbir that this would have not happened if he didn’t get drunk. Kohlis support Prachi and acknowledge her efforts. They are sure that Prachi will always protect Ranbir. Prachi thanks them for understanding. Ranbir thinks of the change in Prachi’s behavior. He doesn’t remember anything about his confession. Maya also gains consciousness. She joins her family. Chobey take a leave. Kohlis are happy to get rid of them. Aryan tells Aaliya that Prachi has worked hard to get the video. He questions her about stealing the memory card. Aaliya gets angry and defends herself. She asks him what motive would she have.

She tells that Ranbir is like her son, she will also try to help him. Aryan tells her that he has seen her. She tells that he maybe mistaken, he won’t be hurting Kohlis, she doesn’t hate Ranbir. She tells that Kohlis are also her family, she can never disappoint them. Aryan believes her tears and gets emotional. He apologizes to her. He goes to be with Ranbir. Shahana wants to know from Prachi if something happened between Ranbir and her. Prachi denies the love moment. She is affected by Ranbir’s proposal and love confession. She wants to ignore him.

Shahana praises Ranbir and asks Prachi to accept Ranbir’s proposal. Prachi knows Ranbir is a nice guy, but isn’t sure of their relation. Shahana tells that she will tell everyone that Prachi proposed Ranbir. Prachi then accepts that Ranbir proposed her, but she didn’t refuse to him yet. Shahana gets surprised. She wants to know Prachi’s answer to Ranbir’s proposal. Prachi asks herself what she wants in her life, if Ranbir’s love should be accepted.