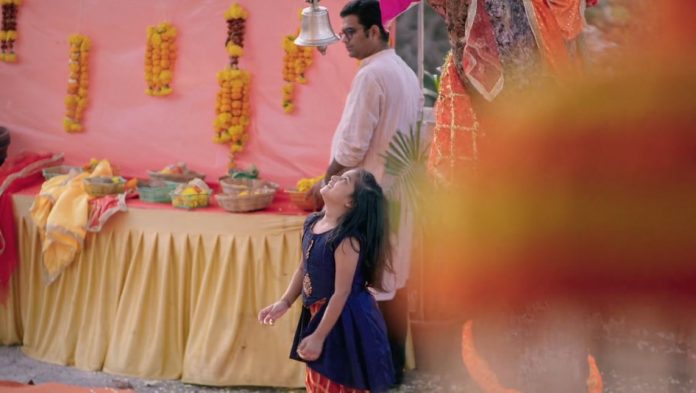 YRKKH First look Kaira Obsessed Kartik hunts for truth Kartik tries to follow Leela and misses to catch her. Leela and Sunny get away from his sight. Kartik gets confused to think if she was really Leela or not. He thinks what are her motives that she is hiding from him. He returns to the temple, where the family is already much worried for his absence. Goenkas cry on finding him missing. Naira feels its a bad sign that the puja got hindered mid way and even Kartik is missing. She asks Suwarna and Dadi if everything will be fine. Dadi is also scared and gets negative thoughts, which soon gets consoled by Manish.

On seeing Kartik, they get relieved. Kartik gets questioned for his absence. Kartik tells them that he went to get some fresh air since he was feeling uneasy. The family is satisfied with his answer. Naira tells him that the puja stopped midway when the havan kund fire was blown off by the falling bell. She tells that this never happened before, the soul peace prayer is left incomplete as if its a sign from their destiny.

She derives wrong meanings from the bad omen. Kartik doesn’t want her to think anything wrong and blame herself. He gets the right meaning and thinks if his daughter is alive. The constant thought makes him obsessed to find out the truth. He gets a see a little girl outside the temple and feels that his daughter would be of her age. The thought shakes him up. He thinks what if his baby was alive and yet the destiny made them part ways. He gets disturbed and goes back home.

He tries to evaluate if Leela was cheating him or genuinely went somewhere out of the city. He can’t deny the fact that he had seen Leela near the temple. He thinks if Leela is hiding from him, then she would be having some motive and it maybe related to his daughter. He gets too anxious to know the truth. He stays lost all the while. He misses out the good moments happening around. He doesn’t want to avoid Kairav and Naira. Kairav makes a family tree and tells that he is waiting for his sister to complete their family. Kairav asks Kartik to fulfill his promise. He calls Kartik the best father. Kartik and Naira spend good time with Kairav.

Naira wants Kartik to be happy and have their baby in their memories. He gets determined to find the truth. Samarth consoles Dadi who is much worried after the puja hindrance. Samarth tells her that everything will get fine soon. He plans an outing with Gayu. Gayu wants to take Vansh along, but Samarth doesn’t agree for it. She feels he is getting biased towards Vansh once again. He leaves her upset. Kartik prays to find a way to reach the truth. He dreams of his daughter and longs to see her. He comes across a shocking news of newborn babies racket running in reputed hospitals.

He can’t believe that the doctors, nurses and staff are selling away newborn babies by declaring them dead. He thinks if this news has some connection with the past, if its a hint that he should follow and reach the truth. Naira asks him to get up and go for his work. Kartik doesn’t tell him anything. He thinks to find out the truth. He calls the police inspector who is handling the case. He isn’t sure if he should seek help in the investigations. He still follows his heart. He tells the inspector that he wants to know about the racket since he feels he is also at loss. He enquires about the hospital list.

He learns that the hospital where his baby was born and declared dead, is also mentioned in the list. He can’t believe this. He asks the inspector about the cases registered from that particular hospital. Inspector tells him that its old cases, he will get the files information and inform him. Kartik doubts that his daughter maybe alive. He gives his contact details and awaits Inspector’s call. He returns home in a depressed mood.