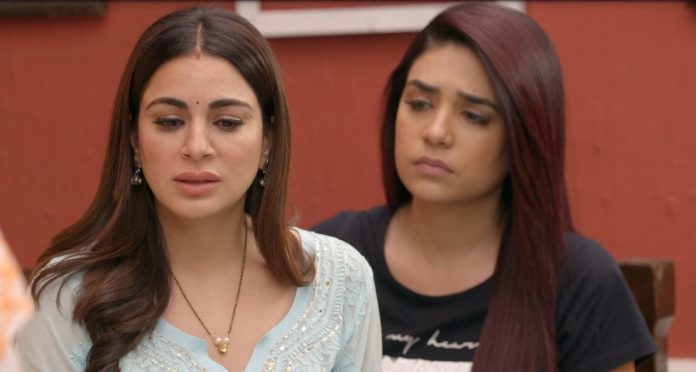 Kundali in circles Preeta bold decision Unfaithful Karan Dadi and Kareena ask Karan, Rishabh and Rakhi to completely forget Aroras, that they had a good bond with them before. Dadi tells that Aroras have hurt them a lot and gave them sorrow. She tells that they will live happily now, without Aroras coming in their lives. She gets emotional when she tells Rakhi that they have to think about securing Mahesh first. She asks Rakhi to be strong and forget Preeta forever.

She tells that Preeta helped them, but caused harm to Mahesh. She doesn’t want to forgive Preeta. Rishabh can’t believe that Preeta can hurt Mahesh. He feels upset that none in the family understands Preeta. Ramona tells them that she disliked Preeta, knowing about the legal notice sent by her. She is happy that Preeta is finally away. Rakhi tells them that she didn’t know that Preeta will back stab them. Sherlyn is happy that this time even Rakhi got against Preeta. Dadi asks Rakhi to forget Preeta’s few good deeds. Kareena tells that Preeta acted to be good towards them just for the sake of their property.

Sameer and Kritika also feel bad. Sherlyn thinks Rishabh has got tight-lipped now, he isn’t able to support Preeta. She thinks she has won completely. On the other hand, Preeta does what she is best at. She keeps crying, while Shrishti emotionally pacifies her. Preeta tells Biji that Karan had postponed the marriage date, Sherlyn and Mahira planned to intoxicate Karan.

She reveals that Mahira wanted to rush for the marriage by her cheap act. She tells that Sherlyn and Mahira maybe responsible for Mahesh’s state, but they accused her. She feels sorry that Karan is also doubting on her. She tells that she had gone to save Karan from Mahira’s cheat, but she got trapped like always. Janki tells that Preeta should have not gone to Luthras, who are completely senseless and thankless. She asks Preeta to stop tolerating their hatred. She wants Preeta to think about herself, its time that she moves on in life.

She reminds that Sherlyn kidnapped Sarla and tried to kill her, when Sarla tried to expose her. She warns Preeta against getting enmity with dangerous Sherlyn. Biji asks Preeta to just have hope on her fate, Sherlyn will ruin Luthras soon. She doesn’t want Preeta to risk herself, since Luthras themselves want to get ruined by their evil Bahus. Sarla gets sad to see tears in Preeta’s eyes. She doesn’t want to encourage Preeta to prove her truth. She thinks its better that Preeta stays away from Luthras. Elsewhere, Mahira is happy that her plan worked, she has separated Karan and Preeta. She shares her happiness with Sherlyn.

She tells that she can do anything now, she will be marrying Karan soon, everyone hates Preeta. Sherlyn tells her that they will fuel the fire. Kareena suggests that Karan and Mahira shall get married soon. Rakhi doesn’t think they should hurry. Ramona praises Kareena and supports her decision. Dadi calls Karan and Rishabh to discuss about the marriage. Mahira gets surprised on hearing about the marriage date fixed. But, Karan is in shock. Karan wants to refuse for the marriage, since he loves Preeta. Kareena wants him to hate Preeta.

She tells him that she wants to protect her family, he has to marry Mahira and end Preeta’s way to return to them. Rishabh gets worried for Karan’s future. Sherlyn tries to blame Preeta again. Rishabh limits her. Kareena asks him if he doesn’t love Mahesh, if he has forgiven Preeta for attacking Mahesh. She wants to block Preeta’s entry in the house. Dadi tells that she can’t forgive Preeta for this big mistake. Kareena tells that they will get Karan and Mahira married tomorrow itself, so that Preeta doesn’t claim any right on their property.

Preeta tells Shrishti that she will not cry for Luthras now, she will not have any terms with them. Shrishti wants her to stay happy. She consoles Preeta. She knows that Sherlyn and Mahira are manipulating Luthras. Preeta takes the bold decision to cut off all her love feelings for Karan. She should keep her self esteem this time. What will Karan do now? Will he marry Mahira by being unfaithful towards Preeta? Keep reading.

Best comment by Ruchi:
Seriously this show along with kumkum bhagya is a complete crap… I think they don’t even need a writer bcos the same story goes round and round. It’s a request that everyone should stop watching this show so that the trp goes down. It’s the most irritating serial of this decade.