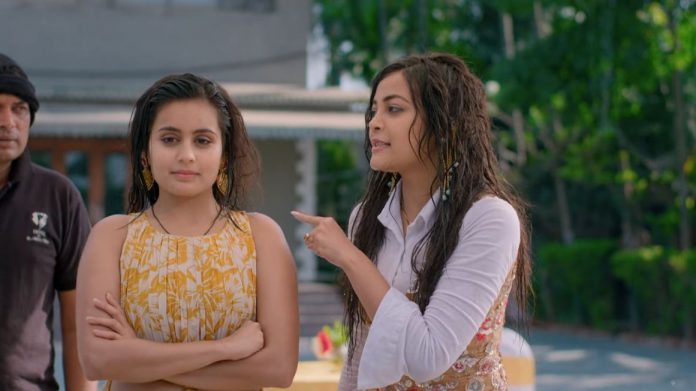 Mishbir Kuku Starplus Rishtey Romance blast upcoming Mishti and Kuhu are doubtful that Abir and Mishti are really kidnapped. Kuhu is angry and thinks to not spare Kunal if he is playing any kidnapping prank. Mishti checks Abir’s location and thinks he isn’t on the highway for any movie. She worriedly runs to find him. She thinks he is really kidnapped by the new gang. Kuhu also checks the location and follows Mishti. She stops Mishti and fights with her to know if Mishti is going to get all the credit.

She tells that she will also come along and save Abir and Kunal. The taxi driver gets bored seeing their cat fight. He tells them that he can’t take them. Mishti and Kuhu find someone’s scooty and steal it for their purpose. They reach the highway and look for their husbands. On the other hand, Meenakshi is working hard to make her image better. She projects herself as an ideal businesswoman. She tells that Parul is her inspiration.

She calls Parul for the interview. She asks Parul to answer the reporters if she will also join the office. She embarrasses Parul. Parul tells that she is much thankful that Meenakshi has raised her son and mentored him. She is glad that her son is much talented and successful. Meenakshi gets the praise by the media. They call her a big-hearted woman to support her Sautan’s son so much. Meenakshi proves that Kunal isn’t her son, but still she has done a lot for him. She shows Parul where she actually belongs. She doesn’t want Parul to take her place in the office. Mishti and Kuhu enquire about Abir and Kunal.

They learn about the kidnapping. They get terrified and collect Abir and Kunal’s mobile phones. Kuhu blames Mishti again. Mishti doesn’t care for her taunts and goes ahead to find Abir. Meenakshi brainwashes Kaushal against Parul. She tells that Parul may cheat them, she may ruin Abir and Atul’s future by snatching the business for Kunal. She tells that she made a mistake to trust Mehul, and doesn’t want to make another mistake. Kaushal tells her that he doesn’t think Parul is such evil. He informs that Parul got all the credit for the interview. Meenakshi wants Parul to remember that she is just to serve the family as a helper and manage the kitchen.

She decides to organize the summer festival. Kaushal calls the media back where Meenakshi boasts of her hardwork. She declares that her company will be handling the big event. She wants much praise. She returns home and clears out to Parul that Parul should just manage the kitchen and household work. Parul tells that she knows her limits. Kaushal informs Meenakshi that she should have asked Kunal before deciding about the summer festival. This angers Meenakshi, who is focussing on insulting Parul. Meenakshi commands everyone to just obey her orders. Mishti and Kuhu get attacked by the kidnappers.

They fight back and command the kidnappers to take them to their husbands. Mishti and Kuhu are thrown into the pool. They get the shocking surprise when they learn that the kidnapping was just Abir and Kunal’s naughty prank. Abir tells that they have hired the fake kidnappers just to pull on a prank. He wanted to bring the sisters together. Mishti and Kuhu angrily throw their husbands into the pool. Abir wants Mishti and Kuhu to sort their issues for once and all. Kuhu tells that this isn’t a way to explain them.

Mishti and Kuhu punish Abir and Kunal. Abir just hopes that Mishti and Kuhu forget their personal differences. Abir informs Nanu that he is enjoying at a resort. Nanu asks him to make the most from his trip. He wishes all the best to Abir and Kunal for their honeymoon. Abir-Mishti, Kunal-Kuhu will be seen romancing on their honeymoon trip, while Meenakshi is engaged insulting Parul.