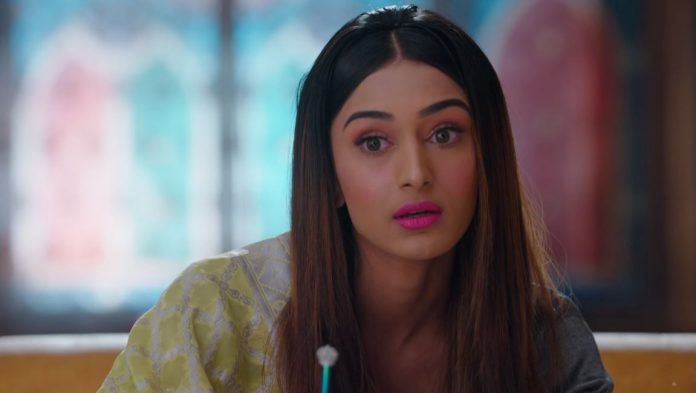 Sneha Prerna Kasautii Starplus Tonight Upcoming Nivedita is frustrated that she got punished by Komolika, because of Prerna’s secret unpredicted strike. None in the family knew that Prerna will return and she will be coming back to take revenge on them. Komolika has removed Nivedita from the CEO post to give the big responsibility of tackling Prerna to Ronit. Nivedta cooks food as Komolika has given her kitchen duties. She calls up Prerna and blasts her anger. She tells that she will not let her succeed and counter her moves well now to win Komolika’s trust.

She asks Prerna not to be happy if she has won the land. She tells Prerna that she will not become a loser. Prerna asks Nivedita if she is still believing Komolika or worried for creating an impression over her. She felt Nivedita will realize Komolika’s evil. She thinks Mohini and Nivedita will never change. Nivedita tells her that she has lost the CEO post to Ronit, just because of Prerna.

Prerna thinks Ronit has done much wrong with her and now she shall not spare him. She plans to take her revenge on Ronit as well. She remembers the time when she was attacked, and how Anurag back stabbed her trust. Anurag and Prerna sink in their memories, good and bitter. Anurag loves her from the bottom of his heart and did everything for her safety. He sees her photo and tells her how much he misses her. He is hiding his love from Komolika so that his family stays fine. He tells Prerna that he will always love her, he is ready to bear her hatred forever.

Prerna is sure to teach a lesson of lifetime to Anurag. Ronit prepares his business plan. He tells Komolika that he will make Prerna regret on his decision. He tells her that they will get a mall constructed and also use the same land for residential flats. He tells that they will sell the flats for no profits and then they will give a tough competition to Prerna. He asks Anurag to just switch the land permissions. Anurag likes his ideas and agrees to work it out. Komolika praises her brother and asks Nivedita to pick up some smartness from him to learn.

She tells Ronit that she knows he is much talented. She asks Anurag not to intentionally lose out again due to her emotions, if he isn’t successful, then he will be responsible for his own loss. She asks him not to run after Prerna. He counts his favors on her. On the other hand, Prerna also changes the plan of construction the residential flats. She tells the manager that they will make commercial township so that the people who reside there will get employment there. She thinks it will be good if the township plan gets the permission.

She also thinks to switch the permissions. She thinks it will be great profit for them. Kajal tries to please Prerna just to take advantage. She wants Mahesh to seek Prerna’s help and join her company. She argues with him, since she is frustrated by her poverty. Kajal pretends to be a sweet person in front of Prerna. Mahesh hides Kajal’s truth, being helpless. Prerna finds them a cute couple and compliments. Komolika is glad to have a child with Anurag. She thinks Prerna has lost her daughter Sneha in the fire incident.

She feels that’s her big victory that Sneha died. She thinks Prerna has lost her happiness forever that day. She regrets that she missed to see Prerna’s emotional breakdown. Sneha is very much alive and raised by orphanage lady Chandrika. Sneha believes in destiny and looks forward to meet her parents. Sneha comes across Prerna and Anurag. She finds them similar and kind-hearted. She develops a bond with them.