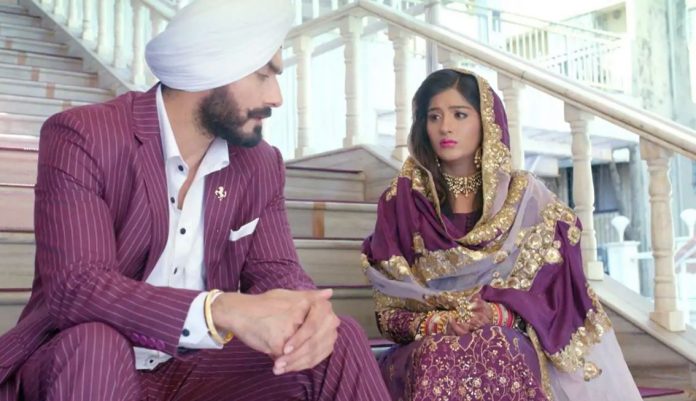 Choti Sardarni New Episodes Promo promising twists Meher tells Sarabjeet that she had made the video against Perry herself. Sarabjeet tells Meher that he didn’t tell her something, he has to tell the important matter to her now. Meher asks the matter. He tells her about Harleen and Ginny getting insulted because of Ginny’s past. He tells that Harleen wanted to tell Ginny’s past to Kulwant to break the alliance. He doesn’t want to hide anything. He confides the truth with her. Harleen is determined to break Ginny and Rana’s love relation.

He tells Meher that Ginny had a boyfriend in Canada, she was pregnant with his child and had to abort the baby later on. He wants Meher to convince Kulwant to accept Ginny with her truth. He hopes Rana’s love for Ginny is true. He trusts Sarabjeet and decides to support Ginny and Rana. Later, Meher gets critical and is rushed to the hospital.

Sarabjeet tells her that nothing will happen to her and their child. He has accepted Manav’s child as his own child and has developed much affection. He wants Meher and the baby to be fine. Sarabjeet sends Meher to the OT and wishes that she gets fine. While he stays outside and awaits the good news, a shocking piece of news comes his way.

He asks the doctor if Meher and his baby are okay. The doctor tells Sarabjeet that she can either save Meher or her baby. She asks Sarabjeet to decide, whom does he want to save. Sarabjeet is super shocked. He doesn’t know what to do, since he knows that Meher would like to save Manav’s last sign, Manav’s child at any cost. He wants to save Meher, but doesn’t want her to think that he has intentionally didn’t favor Manav’s child. He breaks down emotionally. Doctor apologizes to him. She asks him to think well and come up with a decision soon. What will Sarabjeet decide? Keep reading.

Reviewed Rating for this particular post Choti Sardarni New Episodes Promo: 2/5
This rating is solely based on the opinion of the writer. You may post your take on the show in the comment section below.