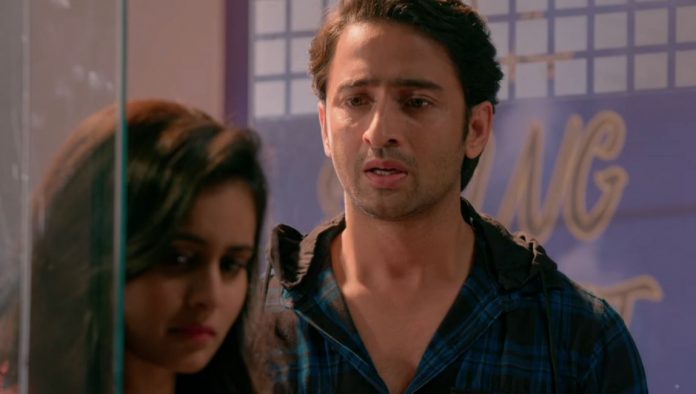 Starplus Rishtey Finale Mishti Abir huge clash Kuhu gets too angry on Mishti. She lightens her heart by calling Jasmeet and telling about Mishti’s new plan of hurting her. She tells that Mishti has cancelled Kunal and her honeymoon by asking them to go home. She reveals that Mishti has turned Meenakshi upset by getting Parul her rights and now Mishti is acting great to obey Meenakshi. She feels harmed by Meenakshi and Mishti’s bonding. She tells Jasmeet that Mishti is really behaving bad and manipulative. She loses trust on Mishti.

Jasmeet brainwashes Varsha and Kuhu more against Mishti. Varsha overhears Jasmeet and Kuhu’s conversation. She finds Kuhu crying and gets much worried for her. Jasmeet tells Varsha that Mishti is securing her place in the house and weakening Kunal and Kuhu’s place. She tells that Kuhu’s happiness got down because of Mishti’s smart move. Varsha is in a dilemma since she believes Mishti.

On the other hand, Abir and Mishti get into an argument because of Kuhu’s immature mistakes. Mishti doesn’t want to clarify herself, since she has told it before that she spoke to Meenakshi by chance. Abir trusts her and tells that he isn’t asking her to clarify. He asks Mishti to just forgive Kuhu and patch up. He tells that things got out of control since she spoke to Meenakshi. She tells Abir that things don’t get out of control until they allow it.

Kunal and Kuhu also get bitter because of the fight. Kunal clears to her that she can’t hurt Abir. Kuhu tells her that she can’t speak anything against Mishti, which will hurt Abir only. She tells that she didn’t speak to Abir badly. He asks her to understand that Abir and Mishti are husband and wife and won’t tolerate anything against each other. He asks Kuhu to spare Mishti for once and all. Kuhu feels that Kunal isn’t doing justice with her because of Mishti and Abir. Mishti tells Abir that they can’t support the wrong Kuhu, who can do anything worse if they keep hiding her mistakes. She tells that they should limit Kuhu’s bad behavior. Abir asks her not to initiate fights with Kuhu. She tells him that he should have scolded Kuhu for spiking his coffee. He tells that he doesn’t want to fight with anyone. He expects Mishti to handle the matter with maturity. He tells her that she has to handle Kuhu. She explains him to stop Kuhu from making immature mistakes for which she is forgiven always. He tells her that she is talking like his mum Meenakshi, who claims to do everything for the family, but always does things for herself. He tells that Meenakshi also tries to prove herself right and breaks the family’s peace in this goal.

He doesn’t want Mishti to follow Meenakshi’s footsteps. He wants Mishti to just ignore Kuhu’s mistakes and move on, by staying calm and composed. Mishti fears that Kuhu will get encouraged if they keep forgiving her and never think of punishing her. Abir tells Mishti that he doesn’t want to see Meenakshi in her. Mishti feels that she isn’t able to understand his point. He wants her to trust him.

She also seeks his trust. She thinks the best solution is to avoid Kuhu. She doesn’t want to go home with Kuhu. He tells her that he is going home with his brother Kunal. He tells her that his relation with Kunal isn’t too messed up like Mishti and Kuhu’s relation. Mishti takes this as a taunt and is disheartened. Abir and Mishti get separated for a while.