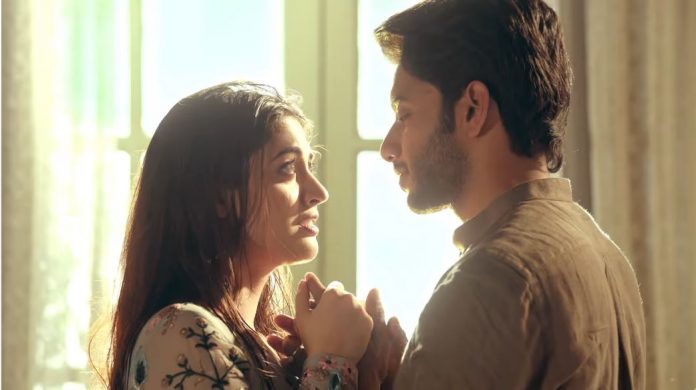 Starplus Survivor twist Aman Roshni Jadu Hai Jinn Ka Roshni questions Aman about his dad Junaid Khan, who got related with the Jinn for the deal of richness. Aman tells Roshni about Junaid meeting the Jinn and promising to give his first child for the sake of the world’s richness.

Aman tells her that Junaid was too keen to become the world’s richest man and didn’t even care for his family in his madness. He regrets the fact that his dad has taken the Jinn’s help. Aman reveals the entire past to Roshni, which was unknown to her. He tells her about the humiliation Junaid faced because of his poverty, how Junaid met the Jinn by summoning the latter after a bloodshed and then dealing to become a rich man.

He tells that Junaid had left Parveen and family behind to reach Lucknow where he met Rubina and married her just for the sake of money. Junaid cheated Rubina’s brother Nawab Sahab and got entitled with the property in no time. He had married Rubina with the aim to rule the city as the Nawab. Rubina didn’t know about his evil intentions. She was also unaware of his first marriage with Parveen. She believed in Junaid’s love and started a family with him. Rubina and Junaid became parents of a daughter, and named her Farah. Junaid then killed Rubina’s brother and his wife, just to make them out of his way. He also gets rid of their daughter, Roshni.

The flashback story shows Junaid’s dream to rule over the city finally completes. Rubina gets over the sorrow of her family’s loss. She then gets a big shock when Junaid’s family returns to him. Rubina couldn’t believe that he cheated her. Even Parveen feels she has lost her husband and denies to accept the cheat. She doesn’t accept Rubina in her life, knowing the entire property and the palace belonged to Rubina. Parveen gets blaming Rubina for snatching her husband. Junaid keeps his loyalty towards his first wife and throws out Rubina from the palace. He gives a small shelter to Rubina for the sake of raising Farah.

Rubina gains knowledge about Jinnats and turns into a strong woman, renaming herself to Tabeezi. Little did she know that she will be fighting Junaid again, when he risks his own son Aman. Junaid puts little Aman as an offering in front of the Jinn to fulfill his promise. Dadi and Parveen gear up to stop Junaid from making this big mistake. They lose out to the Jinn after the big struggle. They get helpless to shoot down Junaid. Junaid, Rubina and Dadi weren’t aware that Parveen is already a Jinn. Rubina shoots at the Jinn with the special bullet and saves Aman’s life. Since then, Dadi gets indebted to Rubina aka Tabeezi.

Dadi completes Junaid’s cremation and regrets that she had to kill Junaid to save Aman from the Jinn. Parveen’s hatred for Rubina doubles up. She gains the property from Rubina and keeps her away from the family. The family then learns that Aman has been cursed by the Jinn, he has become a Demi-Jinn and would turn into a devil on full moon nights. Aman reveals his life’s bitter past to Roshni. She shoulders his sorrowful times.

The past story brings out the connection of Aman and Roshni. Roshni happens to be Tabeezi’s niece, whom Junaid tried to kill by swaying in the river. Aman is worried that Roshni will be dying before the moon appearing at night. Aman lives his life’s most dreadful phase when Roshni undergoes the most unexpected deaths, which leads Aman to die every night and restart a new day for Roshni’s life.