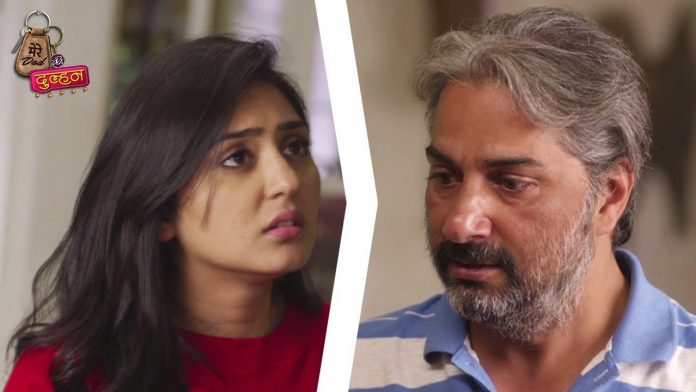 Sony Big twists Mere Dad Two stunning love stories begin Nia gets the first cheque of her first assignment. She shares her happiness with Kajal. She remembers the first contract signed with Kabir for Wenet. She shares the silly moment to get caught at the cafe for non payment of the bill.

She cherishes the old moments with Kabir and friends. She tells Kajal that she has learnt a lot from Wenet and also met Kabir. She takes the cheque to Amber, who stares at it feeling proud like he felt when she got her first trophy. He asks her to keep the cheque safe. She pulls his leg about Guneet.

He gets blushing. She asks him more about Guneet, his commitment towards his love. She tells him that she can post an ad for him to find a life partner. She tells that her dad looks arrogant, but is a gem at heart, he can even cook food, he has many good points. Amber asks her to stop shouting, else Guneet may hear it. She asks him when is he going to tell the truth to Guneet. He tells her that he wants to tell the truth, but then he loses courage, he feels he shouldn’t tell the truth to Guneet else he will lose her, he should wait for more time.

He tells her that he will wait, he can’t tell her. She asks him to write a letter if he can’t tell on her food. She asks him to invite Guneet for dinner. He asks how can he invite. She tells him that he can invite her like the last time and have a blast. Shri continues to pull Kabir’s leg by sharing the old stories. Kabir doesn’t want Swara to know it. Swara feels love for Kabir.

She doesn’t imagine that Kabir is in love with Nia since ever. She thinks Kabir treasures their friendship. Shri understands that she is interested in Kabir. He directly confronts her about her keen interest in Kabir. Swara hides her feelings from Kabir. Nia tells Amber that Guneet and he have made the best dinner together. She asks him to bring the same charm back. Amber turns excited.