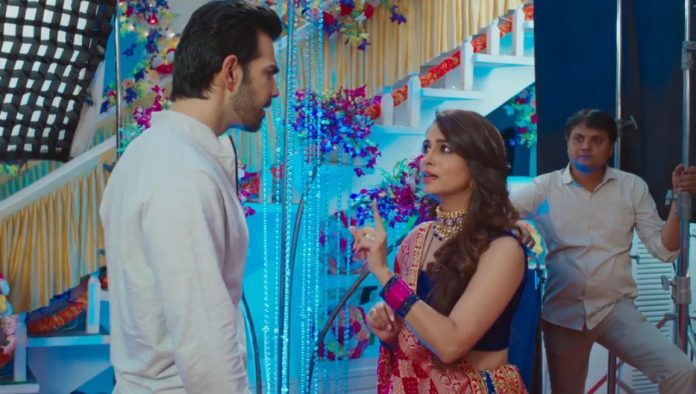 She doesn’t charge anything for the shoot. She gains much fame by her down to earth nature and true heart. She doesn’t forget to pay her staff for the ad, since they are working hard. The staff also refuses to take payment for the humble cause. Then comes Divyanka, Ishita from Yeh Hai Mohabbatein to wish Sonakshi.

Sonakshi opens up on her life, being a busy actress, connecting with her fans on the social media and pleasing everyone by her perfect portrayal as Parvati in Kahani Parvati Ki. Sonakshi is much only as Parvati by her fans. Divyanka wishes Sonakshi to get the best Actress award for the great Parvati character. Sonakshi gets deprived of sleep. She still manages to look fresh. She interacts with the viewers with a direct approach. She is also a simple person off screen. She sleeps in the car.

On the other hand, Rohit is seen de-stressing playing football at night with some of his besties. Rohit is a surgeon by profession. His friends ask Rohit about the girl in his life. Rohit doesn’t think of having anyone in his life. He is happy to be single. Rohit is the most eligible bachelor in town. He pretends to be much joyful, but hides his painful past. His friends ask him to at least get a girlfriend. Rohit jokes that he is going to meet his girlfriend. Rohit and Sonakshi happen to meet, when Shankar takes a turn to avoid the deep pit. Sonakshi wants to see if the guys fallen on the road are fine.

Rohit rages on the driver and thinks he is drunk. Shankar apologizes and explains the situation. Rohit forgives him on seeing the genuine case. He warns Shankar to be careful. He misses to see Sonakshi. Rohit’s entry happens in his lavish Sippy mansion, which didn’t look so much beautiful ever. The Sippys celebrate Rohit’s success. Everyone seems so positive. Even Nishi Bua who turns negative later, is very positive and caring towards Rohit. Rohit is tagged as the best doctor. He doesn’t think he is the best, since he has failed in Raima’s surgery. Raima’s twist isn’t shown in the very episode. It remains a mystery while Rohit hides that chapter. Rohit and family decide to call a celebrity for the hospital’s new wing inauguration. Rohit doesn’t want any big celebrity to come and sideline the technology news. Yash suggests that they can get a TV personality, Parvati. Nishi isn’t aware of Parvati. None of the Sippys know Sonakshi, except Veena and the house helper Vimmi.

A dig into Sonakshi’s life then. Sonakshi meets her commanding mother Suman, who doesn’t forget to mention that she has made Sonakshi a star. She doesn’t want Sonakshi to go against her decision. Yash tells the family about famous Sonakshi, but Rohit is confused. He doesn’t think actors have any standard. Sonakshi gets hopeful to find love in her love. She doesn’t get much sleep, but Suman sends her back to the shoot. Sonakshi gets dizzy. She still keeps her commitments, so that she doesn’t upset Netra.

Pari walks in home from a late night party. Sonakshi gets against Pari’s odd ways. Suman doesn’t care and wants Pari to become a film actress. Sonakshi’s pride is his younger brother Pulkit, who is studying medicine. She manages the family’s expenses alone. She tells that Suman loves her a lot, though she doesn’t express.

She likes the message from her fans. Sonakshi’s car breaks down. She goes for the shoot by hiring a rickshaw. The auto driver is also her fan. He takes a selfie with her. Sonakshi reaches the set and meets the producer Netra. Netra doesn’t forget to take stress always. Sonakshi wants Netra to be optimistic and believe in the show. Rohit regrets over the past of his major failed surgery, where he lost his love Raima. He couldn’t move on since four years. Sonakshi had also lost her first love four years back on the same night. She also regrets for the loss. It shows a strange connection of past between Rohit and Sonakshi.

Shoot in your comments to express your likes and dislikes on the show’s wonderful start.