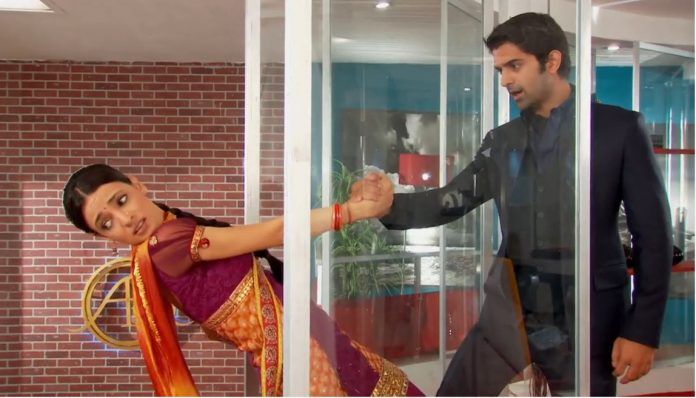 She tells that she will not work for him, she will leave from the office herself, he can’t fire her. He stops her to give a dose of insult. He tells her that she can’t leave like that, the person who hired her will be firing her. She wants to rectify her mistake. She gets falling down from his cabin window. Arnav saves her by holding her hand.

He tells her that he writes his own fate and also writes other’s fate. He tells that he proves his word always, he can save her if she asks for. She tells him that she would like to fall down rather than taking his help. He taunts her that its her nature to fall down, which he forgot. He leaves her hand and makes her fall down. She lands on the crates and gets saved from bone fractures. She gets stained by the paint. The colleagues get a chance to laugh. Lavanya rushes to ASR.

Manju comes to help while everyone laugh at Khushi, making fun of her stained face. On the other hand, Akash, Nani and Manorama try to take care of Anjali. Akash and Anjali make a plan to bring Nani and Manorama together. Anjali acts ill. He knows that Anjali loves her husband a lot and keeps fast for him. Anjali tells him that she knows even her brothers will love their wives a lot. She asks him if he loves someone. He gets shy to say that he doesn’t have anyone in his life. He tells her that he will remember that she is ready to support him when he falls in love. He asks her to enjoy the lime juice.

Lavanya apologies to Arnav. She tells that she will fire Khushi from the job. Arnav has no interest in talking about Khushi. Lavanya gets insulting Khushi. Akash comes to the market. He finds Payal consoling a little boy. He meets Payal for the first time. He likes her thoughts and simplicity. She apologizes if she has spoken a lot. Akash asks her where she lives. She gets nervous to speak to him. He fails to tell his name. Khushi is stunned to get her job termination letter. She knows she is right and doesn’t want to tolerate anything unjust. Arnav and Lavanya head for the meeting.

Khushi doesn’t want them to get away so soon. She barges into the meeting to make a shocking declaration. Lavanya asks her to get out. Khushi tells them that she will not leave the job, when she isn’t at any fault. Arnav asks her to leave if she is done. He gives her a chance to speak. Khushi tells her that he has done enough harm to him already, she doesn’t want to work with him. She tells that she will not leave until she proves herself right. She admits that she is scared of his anger and arrogance, but she is earning to return the money to him.

She thinks he is the reason for her job. She doesn’t want him to decide always. She dares to come in his way. Arnav tells her that he will end the drama which she started. He appoints Khushi once again with a motive to trouble her. Khushi gives him a strong reply. She doesn’t have interest to compete with him. She just wants to work. He tells her that if she resigns from the job herself, then she will pay a compensation of one lakh rupees. Khushi is left in shock by his condition.

She asks if he fires her from the job herself, what would he do. He tells her that he will change his name from ASR to something else. She thinks of giving him a new name. She sounds confident. She tells that she will pay him twenty thousand rupees without fail. He challenges her to accept his contract. He signs on the contract papers, followed by her.

Reviewed Rating for this particular episode IPKKND Stunning twist Starplus Arnav challenges Khushi: 5/5
This rating is solely based on the opinion of the writer. You may post your take on the show in the comment section below.