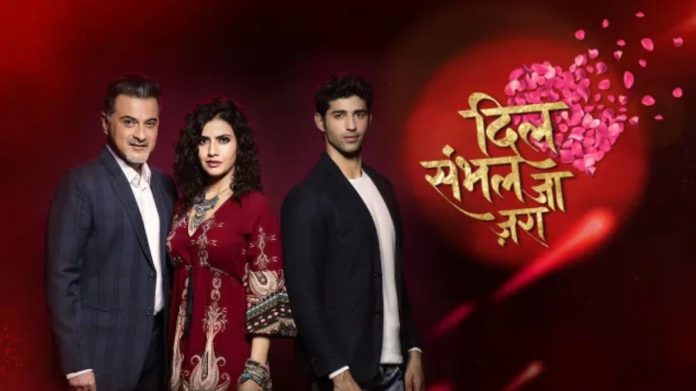 Starplus Dil Sambhal Jaa Zara awaited with Season 2. The story had ended abruptly. The viewers wanted a new season after the climax gave a loose end. Dil Sambhal Jaa Zara revolved around Ahana Raichana, who falls in love with an elderly man Anant Mathur. They have an age gap of twenty years, which becomes a matter of concern for their family.

Ahana Raichand misses her dad dearly, who passed away. She just remembers her mother cheating and becoming a reason for her dad’s demise. She hates her mother Laila and aims to never become like her. Laila is much clever and greedy. She wants to settle both her daughters at a young age to get rid of the responsibilities. She still holds a good social standing. Ahana recalls her dad dying by the shock of Laila’s cheat. She is too frustrated within.

She doesn’t come to terms with Laila. She meets Anant at the lake side and finds peace in his company. Anant is her father’s friend, widowed some years back and living in memory of his dear wife. Ahana and Anant begin sharing their life’s tales to each other. They start bonding. Anant develops feelings for Ahana. Shockingly, Laila plans to marry Anant to get rich again.

She wants Anant’s property some how. She tries to meet Anant and propose him, but things go other way. Ahana learns that Laila is already eyeing Anant and plans to marry him in order to take revenge on Laila by failing her plans. She takes an impulsive decision. Laila wants to clear her debts by marrying him, but Ahana makes her lose. Anant proposes to Ahana, while she accepts his proposal heartily, taking it as a golden chance to settle scores with Laila.

Anant raises his friend’s son Rehaan and treats him like family. Rehaan dislikes Ahana initially and thinks of her as a gold digger. She tries to alert Anant about Laila and Ahana’s intentions. Anant goes crazy in Ahana’s love and marries her, going against his family’s wish. Laila warns Ahana that the latter will never stay happy in her married life due to the age difference, which would soon start shaking the lovely relationship. Ahana vows to never cheat Anant.

Rehaan exposes Ahana’s motives to Anant, that she married him just to take revenge on her mother. Anant doesn’t believe him and makes him leave the house. Ahana admits the real motives behind the marriage. She tries to clear the misunderstandings. Ahana gets pregnant and tries to reveal it to Anant. The misunderstandings goes too long.

Ahana decides to abort the child to focus on her relationship with Anant. Anant learns her decision and gets deeply hurt. He decides to end his marriage. Ahana gets heartbroken and sinks in depression. Soon, Rehaan befriends Ahana on finding her a genuine person. They get bonding closer. Rehaan falls in love with Ahana. Anant isn’t aware of Rehaan and Anant’s affair. Laila learns the truth and tries to cover it up to save Ahana’s marriage. Ahana feels guilty of falling for Rehaan and cheating Anant. She feels she has really become like Laila, the person she used to hate the most. She betrays Anant to be with Rehaan.

Rehaan’s girlfriend breaks the truth to Anant through a letter. Anant learns about Ahana and Rehaan’s affair and confronts them to confirm the truth. The season 1 ended with Anant’s raised question. The show kept the interest high till the end. Starplus may consider bringing back the show with Season 2. Shoot in your comments below.