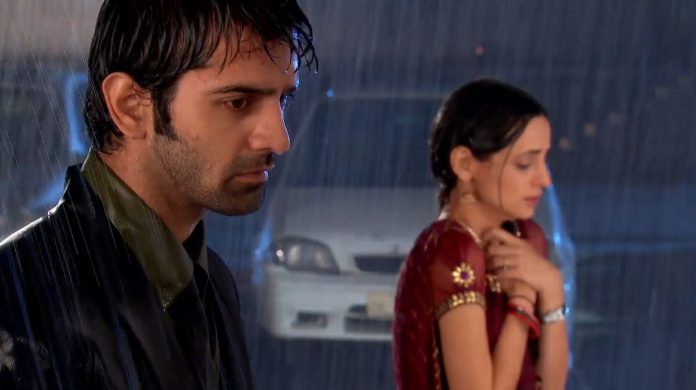 Starplus Khushi Arnav love feelings turn confusing Arnav saves Khushi from getting knocked down by a car. They stand still under the rain and have a romantic moment. Arnav and Khushi’s Rabba ve moment begins once again. He gets confused about her, believing that she isn’t as bad as he thinks. He still makes her away. He doesn’t know his growing feelings.

He asks her why did she come in front of the car, when she was just asked to handle the parking. Khushi shivers in the rain. She doesn’t seek his help. He thinks she is acting helpless or seeking attention. He gives his coat to her to help a bit. He stays arrogant and asks her to look better for the sake of his company image. She returns the coat to him, keeping her esteem and not accepting his help. Bua ji is much stressed that Khushi didn’t arrive home.

Khushi crosses her way to home after completing her work. Arnav doesn’t drop her. Akash comes to her rescue. He offers her help. Khushi accepts his help, when she finds no means of transport. Arnav rages thinking of Khushi. He is angry on himself that he is over thinking about her. He feels that he is doing wrong with her. He doesn’t want to let go of his hatred. He then concludes that he is doing the right thing. He doesn’t want to give any entry to Khushi in his heart. Akash takes Khushi in his car. Khushi tells him that its her sister’s birthday, but she got stuck in work, she couldn’t buy any gift for Payal.

Akash sympathizes with her. She tells that she is sharing her heart. He had bought the dupatta for Payal. He thinks of Payal. He thinks to give the dupatta to Khushi so that she can gift it to her sister. He hands over the dupatta. Khushi likes it, but doesn’t want to keep it. He tells her that she can keep it, the girl for whom he had bought it, maybe he won’t meet her again. She is thankful to him. He doesn’t want her to pay for it. He feels she is already bearing a lot due to Arnav. She complains about Arnav.

He tells her that Arnav has turned arrogant, since he had faced a lot in his life. Khushi tells that he isn’t arrogant, being rich like Arnav. She calls Arnav a devil. Shyam awaits Khushi and calls her up. He wonders where did she go. Akash drops Khushi at her home. Khushi happens to see Shyam. Shyam gets to see Akash’s car. He rushes out of the place. Akash learns that Payal is Khushi’s sister. Khushi tells that its Payal’s birthday today.

Akash thinks the dupatta was meant to reach Payal some how. Akash tells Khushi that he will leave. He asks her to gift the dupatta to her sister. He wishes Payal from far and makes a leave. Khushi tells Payal about Akash. She apologizes to Payal for coming late. She tells that Arnav is troubling her. She wants to celebrate Payal’s birthday. Shyam reaches Khushi after Akash goes. He learns that Akash has dropped Khushi.

He wants to know how did Khushi get to meet Akash. Arnav and Khushi catch cold. Anjali takes care of Arnav. Arnav learns that Anjali is upset since her husband didn’t come home. Manorama tells him about the lady taunting Anjali. She wants Anjali’s husband to come home and shut everyone’s mouth. Arnav asks Anjali to understand her husband’s work pressure. Nani reminds him that he also avoided the puja and hurt Anjali. Arnav thinks of daring Khushi. He wants Lavanya to send him Khushi’s mobile number.

Lavanya asks the reason for calling Khushi at this hour of night. She thinks he is paying much attention to Khushi. He doesn’t want to spare Khushi by burdening her with work.

Reviewed Rating for this particular episode 24 Starplus Khushi Arnav love feelings turn confusing: 4/5
This rating is solely based on the opinion of the writer. You may post your take on the show in the comment section below.