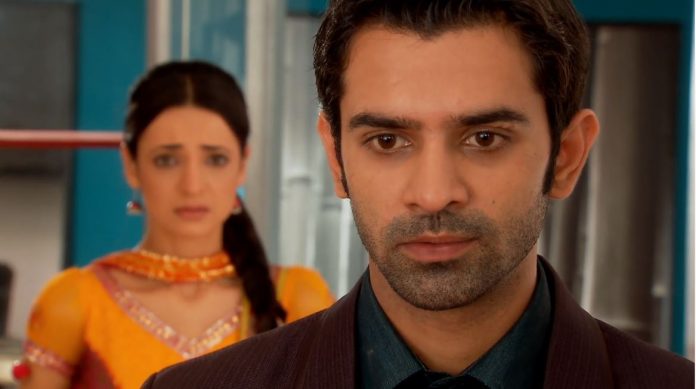 IPKKND Khushi accused Starplus Another shocker Nani and Anjali take care of Khushi, which irks Arnav. Khushi gets scared of his taunting look and doesn’t have the breakfast. Arnav goes away. Khushi thinks she doesn’t fit in his house and wants to go soon. Nani wants to know about Lavanya. She asks Khushi about Lavanya indirectly.

Khushi tells her that Lavanya works with Arnav. Nani is surprised to know this. Khushi tells her that Arnav should marry Lavanya soon, since he is dating her. Nani doesn’t want to permit this relationship. She doesn’t like Lavanya. Khushi reveals more about Lavanya. She tells that Arnav and Lavanya are always together. She gets excited for their marriage. She tells that she will gift some suits to Lavanya. Nani tells that she is worried about Arnav, since she can’t let him marry Lavanya. Khushi thinks she has done a mistake to tell Nani about Lavanya. She doesn’t want Arnav to know it. Nani tells her that she knows everything, being Arnav’s Nani. She wants to know who all knows it in the office. Khushi tells that everyone knows it in the office. She tells that she has seen Arnav and Lavanya romancing. Manorama also overhears this and is glad that Khushi is revealing Arnav’s secrets. Arnav is angry because of Khushi.

Anjali doesn’t want him to trouble Khushi. Anjali asks him to drop Khushi at her office. Arnav doesn’t want to drop her. Nani also commands Arnav to take Khushi along. She wants Arnav to return home early for an important discussion. Nani asks Khushi to keep coming and meet her. She feels Khushi is a nice girl. Arnav doesn’t think so. Arnav asks Khushi how dare she enter his house. He doesn’t want her to do any drama. Khushi tries to clarify. He tells that he will not take her in his car. He reminds her status. He insults her.

Khushi gets arguing with him. Arnav asks her to follow him to the office. Manorama tells Anjali that Khushi has told Nani about Lavanya. Anjali seeks Manorama’s help in convincing Nani. She informs Arnav about Khushi’s unintentional blunder. Arnav fumes again, thinking she has done this intentionally. Nani gets angry on Anjali for hiding the truth from her.

Anjali apologizes to Nani, since she intended to tell her the truth when the right time comes. Nani yells at Manorama for interfering in the personal matter. Manorama tells that she has come to see who is shouting. She taunts Nani. Anjali doesn’t want Nani to be upset on her. Nani feels that Anjali and Arnav don’t need her now. She calls up Lavanya to know about her.

Lavanya speaks to her nicely. Nani asks her to come home and meet her. Lavanya doesn’t know why is Nani calling her to meet. She wants to rush and meet her. Arnav summons Khushi into his cabin right away. Arnav tells Khushi that he would never tolerate her, he will end the contract if she dares to interfere in his personal life. He asks her why did she tell Nani about Lavanya. She tells that she thought Nani knew it already.

He humiliates her for having a bad intention and purposely revealing his personal interests because of her motives. He asks her what was she thinking when she told Nani about Lavanya. He rages at her. He tells that she would be worried that she couldn’t trap any rich man by her beauty trap. The colleagues witness Khushi’s tear shed and feel sorry for her. Khushi leaves from the office. She recalls Arnav’s words. She gets punished with another tough task. She thinks to undergo the punishment, since she has to complete the tasks. Khushi goes to the under construction building to make the repair inventory list.

The worker tells her that the report is already ready. He asks her to check the file herself. Khushi finds the building’s condition really bad. She thinks the list doesn’t match with the site’s needs. She calls up Arnav to know why did he send her there. She calls Arnav to know the purpose. He asks her to make the report well, else not leave from the bungalow. She thinks he wants her to leave the job. She doesn’t want to quit so soon. She goes to meet Mr. Sinha, the incharge of the construction site.