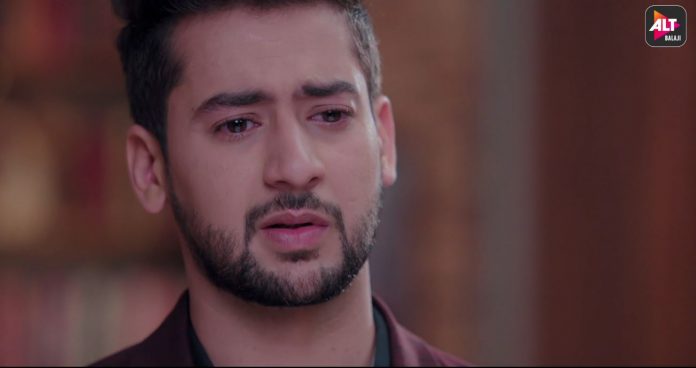 Alt Balaji Climax finale E19 Vikrant emotional breakdown Palak tells Rithvik that she isn’t okay with his memory loss. She tells that she is affected by his accident. Rithvik wants to know what has happened. Vikrant calls her and informs about Setu’s accident. Reva calls Rithvik and informs about Setu. Vikrant and Reva ask Rithvik and Palak to handle Rohit.

Rithvik promises to not let Rohit and Setu get separated. Setu gets conscious. She wants to know about Rohit. Aman lies to her that Rohit has gone out to get the medicals. Reva tells Setu that there is no serious injury, she should just take rest. Shivam and Ananya try to find Rohit. Shivam feels that their preparations have got waste. He tells Ananya that he should make an app to track people.

He wants her to call Rithvik. She calls up Rithvik. Rithvik compliments Ananya and makes Palak jealous. They are on the way to meet Setu. Rithvik tells Ananya that he is always ready to meet her. Ananya tells him that she is just his best friend. Rithvik tells Ananya that someone strange had got over him when he was fascinating about him. Ananya tells Shivam that Rithvik has gone mad. Shivam is happy that Rithvik is with Palak. Ananya informs Reva that Rithvik is falling for Palak, he was fake flirting with her (Ananya) just to make Palak jealous.

Reva thinks its a good hint. Shivam and Ananya try to get news about Rohit. Rithvik and Palak come to the same cafe where they used to meet before. Rithvik tells that Rohit often visits the place. Rithvik gets few memories back. He doesn’t get to see Palak’s face. Rithvik tells her that they had come there before. He tells that he has seen her face this time, they had come there some years back. She gets happy. She wants him to remember everything. She tells him that she was Vijay’s physiotherapist and had met him before.

She wants him to recall everything on his own. Reva tells Ananya that Rohit had left the party to bring Rithvik and Palak together. Ananya tells that maybe the boys gang knows something more than them. Reva tells her that Shivam knows that Vikrant is divorcing Palak and went to his office for getting the divorce papers. She gets angered on Shivam. Rithvik asks the manager to help him in finding Rohit. Rithvik asks Palak about Vikrant.

She tells that friendship is more important. She knows that Vikrant and Palak are meant to be together. She asks him if Palak is with Rithvik, then does he think they will have any chemistry. He doesn’t think so. She tells that his trust is love. Palak tells Mamta about taking care of the girls. She informs that Reva is with Setu. Rithvik tells Palak that she is also caring like Mamta. He tells Palak about his mum. He realizes that Mamta stood by him when he fell in love with someone. He gets dizzy thinking of the past.

Shivam is caught by Reva, who doesn’t trust him now. He tells Reva that he will try to call up Rithvik. Rithvik wants to check the cctv footage to know about Rohit. He flirts with the manager, who tells that she isn’t interested in boys. Palak flirts with the lady to get to know about Rohit. Rithvik laughs on seeing Palak flirting with the lady. They get to see the cctv footage. They find Rohit drinking with some girl. Rithvik tells Palak that he knows about the girl, he can find out Rohit. Rithvik and Palak visit the girl Tanya. They learn that Tanya is at a farmhouse with her friend. Vikrant asks Palak about Rohit.

She tells that she is still finding Rohit. She tells that she will update him. Vikrant goes to help Palak. Vijay messages Palak by mistake, when he wanted to message Vikrant, not to divorce Palak. Palak gets the message and wants to speak to Vikrant. Rithvik finds Rohit cheating Setu. He beats up Rohit and threatens to tell Setu about him. He asks Rohit why did he cheat Setu. He tells Rohit that Palak is waiting for them outside.

He comes up with lies. He tells that they have to lie to Palak. Vijay asks Vikrant about his reply. Vikrant tells him that he didn’t get any message. Vikrant learns that Palak has received Vijay’s message. He rushes to meet Palak. He doubts that she had been with Rithvik at the farmhouse. He faces an emotional low.

Reviewed Rating for this particular episode Alt Balaji Climax finale E19 Vikrant emotional breakdown: 5/5
This rating is solely based on the opinion of the writer. You may post your take on the show in the comment section below.