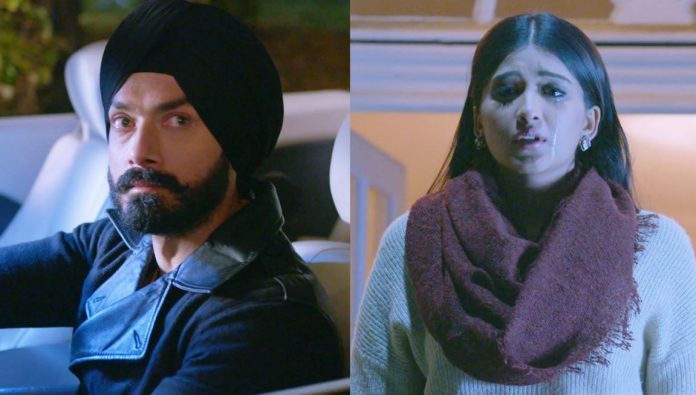 Choti Sardarni begins revenge track Two new entries Param complains to Sarabjeet that he isn’t feeling sleepy. Sarabjeet tells him that he will sing a lullaby for him. He wants to prove that he is a super dad. He sings a lullaby which ruins Param’s sleep further. Param gets disturbed. He wakes up. Sarabjeet asks if he doesn’t want to hear the lullaby.

Sarabjeet asks her to better sing well. She challenges him to sing a good lullaby. Sarabjeet tells that he will prove his singing skills. He sings the lullaby again. It really aches Meher and Param’s ears. Kulwant gets to hear Sarabjeet’s singing when Meher enters her room. Kulwant gets scared like she is seeing any nightmare. She regards it like some animal cry. She shouts that there is an animal in the house. The entire family wakes up on Kulwant’s scream.

Kulwant wants them to find out the animal and make it out. Sarabjeet continues to sing, while Meher wants him to stop. He asks her if she has liked his melodious voice. She tells that his voice was scary, everyone woke up due to his voice and thinks some ghost has entered the house. She jokes that even the ghosts sing melodious than him. He praises his talents.

Sarabjeet asks her not to insult him. She tells that she gets fun when she argues with him. Sarabjeet gets anger on his nerves. Param gets laughing on seeing them fight. He was missing their cute fights. He asks Meher to sing a lullaby for him. Sarabjeet asks him not to cry, he will sing once again. Meher tells that she will sing the lullaby and make him sleep. She asks him to lie down and close eyes. Sarabjeet challenges Meher to put Param to sleep.

He tells that Meher will not make him sleep. Meher takes up the challenge. She sings a beautiful lullaby for him. She cherishes her wonderful memories with Param. Param falls asleep. Even Sarabjeet feels sleepy on hearing her sweet voice.

She asks him to pour water on Sarabjeet’s face. Sarabjeet wakes up and finds their mischief. She asks him not to cheat. She tells that she has won the challenge by singing for Param. She wants him to commit that he will never sing. She makes him do sit ups.

Sarabjeet promises to never sing a lullaby. Meher wishes for her children. She wants her family to be happy. A new villain enters Sarabjeet’s life. The girl wants to ruin Sarabjeet’s happy family. She gets angered that he broke her heart and didn’t accept her love. She wants to give the pain back to Sarabjeet and Meher. She has someone in her revenge plan, who would help her in destroying Sarabjeet. The revenge track begins. The two negative entries will be creating a havoc in Sarabjeet, Meher and Param’s lives. Sarabjeet’s past will be opening up, with his obsessed lover coming to settle scores.

Reviewed Rating for this particular episode Choti Sardarni begins revenge track Two new entries: 4/5 Hilarious and intriguing
This rating is solely based on the opinion of the writer. You may post your take on the show in the comment section below.