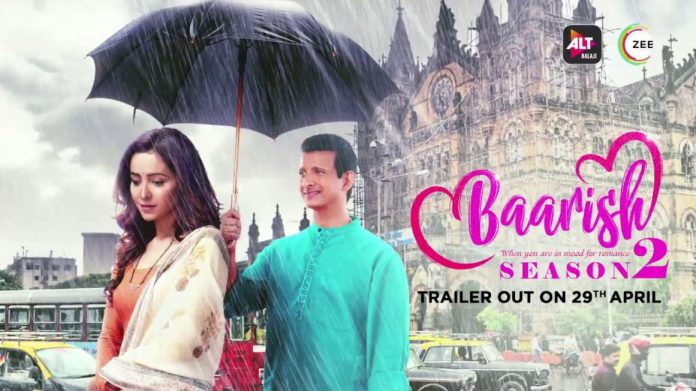 Baarish Season 2 AltBalaji Asha Negi Sharman Joshi Gauravi and Anuj’s relationship goes through ups and downs, after he faces big financial troubles. The couple reach the stage where they apply for divorce. Baarish Season 2 brings a ride of emotions. They get questioned about their relationship’s struggles.

Gauravi and Anuj then go down the memory lane to evaluate what went wrong between them. Gauravi doesn’t get acceptance in his family. She doesn’t want to come between Anuj and his family, knowing she stands at no good place. She also knows that Anuj loves her dearly and may not be able to forget her. More of Gauravi and Anuj’s post marriage romance is seen in Season 2. Gauravi tells him that she didn’t know his romantic naughty side, since she assumed him to be much decent.

They have cute moments of love. They get to stay in Gauravi’s home when they face troubles in Anuj’s family. Baarish brings them together and also rises their romance further. They had nothing to lose, but much to gain. They get a good news that they are soon becoming parents. They feel complete when their new phase of life will begin. They just had each other to support. Gauravi learns that Anuj had lost a big contract and would suffer huge losses, he may even land in jail for the fraud. She gets helpless to find options to solve his problem.

She cares for Anuj, whom she loves dearly. Gauravi finds Anuj landing in jail. She tries to get help. Anuj promises Gauravi that they will never face any financial crisis. He asks her not to break the marriage. He reminds him their connection. He professes his love to her again. A new guy enters their lives. Anuj gets suspecting Gauravi, when he finds her with her friend. The bitter arguments spoil their love story. They get everything back in their lives without each other. Gauravi’s affair strikes his heart. He misunderstands her loyalty and love.

Anuj thanks her friend to always be with her. She admits about her affair when she falls in Anuj’s eyes. Anuj decides to end his relationship, which can’t blossom after her deceive. But, their love story doesn’t end. Anuj realizes his mistake to suspect her and runs to save his love from shattering down.

Reviewed Rating for this particular episode Baarish Season 2 AltBalaji Asha Negi Sharman Joshi: 5/5
This rating is solely based on the opinion of the writer. You may post your take on the show in the comment section below.