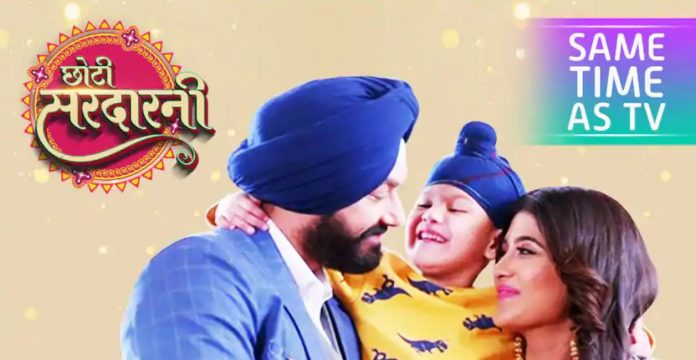 Choti Sardarni Param makes a big blunder 29th July Sarabjeet wants Harleen to name the child. Harleen asks him not to involve him in the mess. She acts rude and shocks Meher. Param requests her to keep a good name for baby. Harleen knows that Sarabjeet isn’t the baby’s father. She refuses to do the Naamkaran. Sarabjeet asks Param to finish his food. Harleen tries to instigate Param against Sarabjeet and Meher. She makes him realize that his parents got the new baby and will not value him. Param gets triggered against Meher’s baby.

Aditi learns about Harleen’s behavior. She realizes that Harleen may help her, due to her hatred for Meher’s baby. Param feels Sarabjeet and Meher got bored with him after getting the new baby. Harleen tells that they love him a lot. Meher knows about sibling rivalry. She doesn’t want Param to get upset because of the new baby. Sarabjeet tells Meher that he also thought to surprise Param. She tells that they will treat both the kids equally. Sarabjeet agrees to her. They have a moment. His poetry surprises her. She tells him that he won’t get anything even if she likes his poetry. He also teases her. They live their life happily.

Param complains to the baby. He pours his heart out. He gets upset that the baby has new toys. He also wants new toys. Param asks the baby what is he saying through his cry. He wants the baby to apologize. He bonds with the baby. He also apologizes to the baby. Param picks the baby from the cradle. He falls down and drops the baby as well. Sarabjeet and Meher reach there in time and receive a big shock. The baby stays safe after landing on a huge teddy. Harleen and Robby reach them to ask what happened. Sarabjeet tells them that Param dropped the baby. He loses his cool and scolds Param for his wrong act.

Param tells them that he didn’t drop the baby, he fell down himself. Meher tells that they don’t know how did Param take the baby from the cradle. Sarabjeet asks Lalita to check the baby. Lalita tells that the baby is fine. Param gets scolded a lot. Sarabjeet doesn’t want Param to hurt the baby. Harleen doesn’t want him to hurt his own child for the sake of Meher’s child. Meher asks Sarabjeet not to scold Param, he didn’t do this intentionally. Sarabjeet wants Param to learn from mistakes.

Meher calms him down. She asks Param to apologize to Sarabjeet. Harleen tells them that Param will not apologize, they should be sorry to scold Param so much. Param gets against Sarabjeet and Meher. Param tells them that he also got hurt, but no one asked his state. He gets heartbroken. He doesn’t want to be with his parents. He goes to Harleen to be with her. Harleen takes Param with her. Sarabjeet asks Meher to let him stay strict towards Param, else he will make many such mistakes. He takes care of the baby.