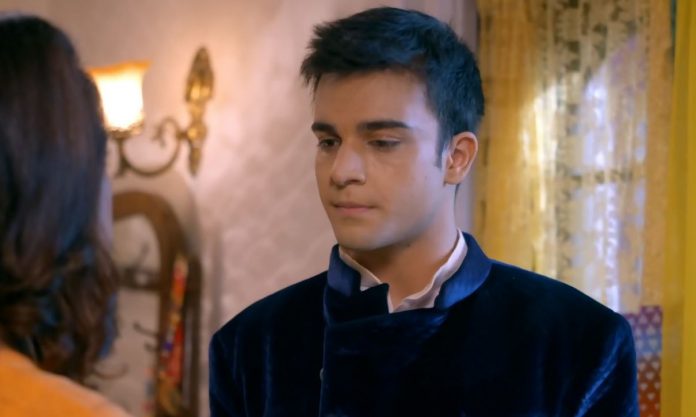 Kumkum Bhagya Upcoming Update 13th August 2020 Prachi wants Ranbir to leave from her house. He tells her that he will come by the door. She doesn’t want him to come back. He asks her why was she upset when she left, why was she staring at him. She tells him that she got her earring and anklet in his room, she wants to know if he has stolen it. He refuses to know about it. She wants to know if he likes to wear the anklet.

Ranbir asks her not to think wrong, maybe she has kept the anklet herself. She asks why does he care if she is upset. He tells that it matters to him, since he cares for her, he regards her a good friend. He asks her why did she hurt him by the blame. She asks him to go. Ranbir tells her that he will never come back. She doesn’t stop him. Ranbir suspects Sanju on hearing his voice. Sanju informs Rhea that Aaliya has sent someone else to rob the money. Rhea tells him that she will ask Aaliya. She asks Aaliya if she has sent someone to execute their plan.

Aaliya tells that she didn’t send anyone. Sanju tells that Aaliya is lying, since someone is already there to get money. Aaliya asks him to stop making excuses and do his work. Prachi thinks Ranbir will come back. She waits for him. She doesn’t want him to feel bad. Sanju and the aides enter the house. Shahana teases Prachi for secretly meeting Ranbir. They hear a sound and think if Ranbir has come back. Sanju locks their room. Prachi thinks who has locked their room. Sanju tells that they will check the house first and then check the rooms.

He wants to show attitude to Rhea. Rhea gets restless to know if her plan worked. Aaliya asks her not to take stress. Rhea doesn’t want Sanju to get caught. Sanju tells that he got the money, he will come to meet her. Aaliya asks him to come in the morning. Rhea and Aaliya get glad that they will be blaming Prachi now and work out their plan. Aaliya asks Rhea to have a good sleep. Pragya and her family beat up the thieves. Sanju finds his aides caught. He doesn’t want them to reveal his name. Prachi calls the cops home. Sanju captures Prachi and threatens the family.

Reviewed Rating for this particular episode Kumkum Bhagya Upcoming Update 13th August 2020: 3/5
This rating is solely based on the opinion of the writer. You may post your take on the show in the comment section below.