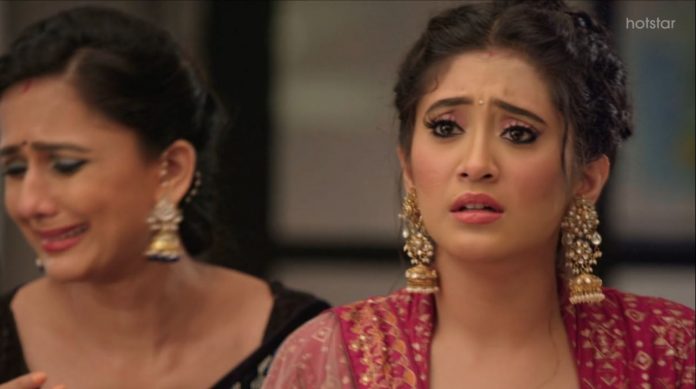 Yeh Rishta Manish special demand for Kaira 21st August 2020 The police arrives in Goenka mansion to talk to Naira about Chori. Inspector tells Naira that he still has to find a suitable shelter for Chori, either a hostel or a NGO where her future can be secured. Naira wants a safe place for Chori, since she is a girl. She asks inspector to take his time and make good arrangements. Kartik also wants the same for the girl. Inspector tells Naira that she didn’t commit any crime and doesn’t need to take up the girl’s responsibility.

Naira can’t keep Chori home since Dadi and others would object. Naira gets speechless. Chori tells her sobbing story that she is an orphan, homeless and helpless. She tells that she has no roof over her head. She starts pleading Naira to hire her for household chores and keep her home. Naira can’t take child labour. She just wants Chori in safe hands. Inspector tells Naira that arrangements can’t be made in a single day, he needs time for it.

Kartik agrees to keep Chori in Goenka mansion until inspector makes arrangements for her stay. He tells that he will send away Chori soon. Chori gets hopeful to stay back. She wants to stay with Naira, who seems good-hearted to her. Kartik and Naira think of keeping Chori in the guest room. They don’t want to leave the girl helpless on the roads. Naira is glad that Kartik understands the situation. Kartik tells her that he will not tolerate anything wrong. Police inspector tells them about the gang who had stolen their baby.

Kartik tells that they know their daughter isn’t alive, they don’t need any information about the gang. He doesn’t think there is any possibility left. Naira warns Chori against making any mistake again. She doesn’t want Kartik to know about Chori’s involvement in the accident. Chori calls Naira her mum and makes her emotional. When she finds Manish playing a video game, she goes to ask him. He doesn’t listen to her. She snatches the game.

Manish falls down the stairs due the scuffle. He gets bit hurt. The family panics on finding him hurt. Kartik and Naira realize that Chori is responsible for his fall down. They want to take her class. Kartik doesn’t want the family to make Manish tensed. He sends them away. He tells Manish that he is very strong, such things do happen with brave kids. Manish gets encouraged. Naira explains Chori that Manish is ill and he should not be hurt. Chori tells that Manish isn’t hurt, everyone was just panicking. She feels he is really crazy.

Unexpectedly, Kartik overhears their conversation. He asks Chori not to call his dad mad or anything indecent. He warns her against hurting Manish. He tells Naira that he won’t tolerate Chori troubling Manish further. He wants to protect Manish. He feels Manish is his first most priority. Naira asks Chori not to do anything again, else she can’t save her. Kartik tells that he will throw out Chori on her next mistake.

Chori gets scared of him. He tells that she will get everything she wants, but they want peace at home. Dadi informs Kartik about the Janmashtami function. She doesn’t know if they should celebrate. He asks Dadi to keep the function since the prayers may help Manish recover. He gets emotional thinking of Manish. The family celebrates Janmashtami. Dadi prays that her son gets fine. Naira wishes the family regains the lost happiness. Kartik wishes Manish’s recovery. They find Manish missing. Manish’s violent behavior shocks Kartik.

Kartik gets hurt in the course to control Manish. Manish gets stubborn and demands a good book to read. Kartik fails to convince him. He breaks down thinking he is failing as a son. Naira finds a way to engage Manish by passing a photo album. Manish tries to recollect Manish and Naira’s dance performance. Dadi requests Kartik and Naira to perform the same dance once again so that Manish gets his memory back. Chori likes the big house and family. She enjoys her life and wishes to stay with Goenkas forever.

Reviewed Rating for this particular episode Yeh Rishta Manish special demand for Kaira 21st August: 3/5
This rating is solely based on the opinion of the writer. You may post your take on the show in the comment section below.