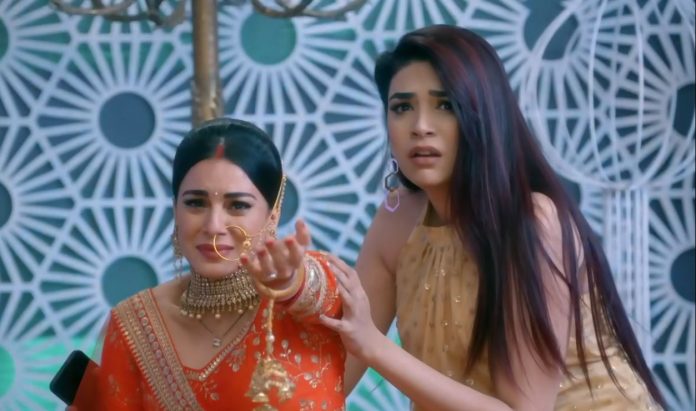 Kundali Bhagya Karan enraged Preeta ousted again Kareena tries to oust Preeta from the house. Mahira asks Sherlyn why does she want to kill her. Sherlyn asks her to understand and put the big drama of self-immolation in front of Luthras, so that they get compelled to throw Preeta outside. Mahira asks her why didn’t she tell the plan before. Sherlyn asks her to threaten everyone that she will burn herself alive. Mahira rushes to everyone and threatens them. She pours the kerosene on herself.

She asks them to just throw out Preeta. She ignites the fire around her. The family panics seeing her in the fire. This turns out to Mahira’s scary dream. She tells that if anyone doesn’t stop her then she may die by the fire. She doesn’t want to take the risk. Sherlyn tells her that Luthras will save her life, they will believe her drama. Mahira doesn’t want anything to threaten her. Ramona accuses Preeta for ruining Mahira’s life. Bani feels unwell suddenly. Preeta cares for her, but gets reprimanded.

Sherlyn tells the family that Mahira tried to burn herself. Ramona cries for her daughter. She wants Preeta out of the house. Preeta tells that Mahira and Sherlyn are lying as always. She tells them that she has cheated Karan and married him, they can scold her being her in-laws. She connects to Rakhi. Bani asks her not to fool Rakhi emotionally. Rakhi tells them that she is Karan’s mother and knows him better than others. She feels that she has more right on Karan’s life than the rest of the family.

She tells them that her decision will be final and everyone will have to obey it. She recalls Preeta’s relationship with the family. Karan hates Preeta thinking of Mahesh’s accident. Rakhi declares her decision. She wants Preeta to leave. This gets unexpected from Rakhi. Kareena drags Preeta to oust her. Preeta wishes Karan to break his silence and accept her. Karan thinks of Preeta and his marriage. Sherlyn hurts Shrishti in anger. Bani stops Sameer from caring for her. Shrishti runs to her sister and shoulders her in pain.

They didn’t know they will get insulted once again. Karan and Preeta have a longing. Karan limits his feelings. Rishabh opposes Rakhi’s decision. He asks her why did she oust Preeta. Rakhi tells him that she has asked Preeta to leave for a reason. He asks her if she doesn’t care for Preeta, she should have thought of Preeta’s emotions. He tells that Preeta hoped from her and got ousted. He doesn’t think that its fair. Rakhi tells that Preeta showed faith on her. She tells that she really thinks Preeta should be away, she has done wrong with them, she should have not cheated Karan. Her thinking about Preeta changes.

Rishabh doesn’t think she is right. She reminds him that she always supported Preeta, but today Preeta has crossed the limits. He wants her to understand that Preeta didn’t do wrong. She can’t accept the marriage done by deceive. She tells him that both Karan and Preeta were wrong in the same way. He wonders how did Rakhi get so against Preeta in a moment. He wishes Rakhi could realize Karan’s mistake. Preeta gets ousted and sheds tears once again.

Reviewed Rating for this particular episode Kundali Bhagya Karan enraged Preeta ousted again: 2/5
This rating is solely based on the opinion of the writer. You may post your take on the show in the comment section below.