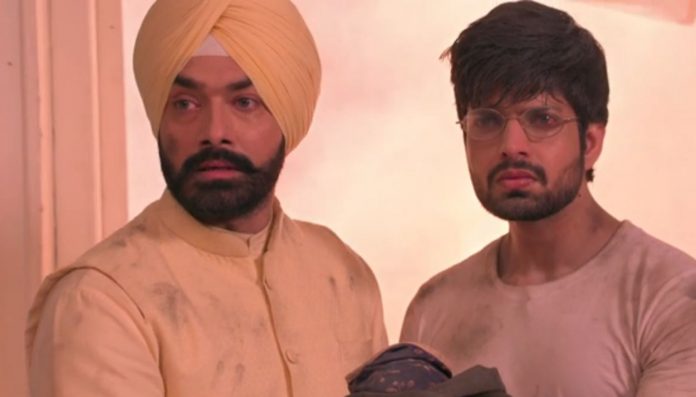 Choti Sarrdarni Vikram shocking plan next 28th August Meher shouts for help to save Karan. She tries hard to save Karan from the fire. Sarabjeet reaches Meher to know the problem. Vikram also gets concerned about her on hearing her scream. Sarabjeet and Vikram find the entire room burning. Meher gets dizzy by the smoke. Sarabjeet finds Meher in the middle of the fire. Meher signs him about Karan.

Sarabjeet saves Meher from getting underneath the blazing roof. Vikram looks for Karan. The family worries seeing them struggle in the fire. Harleen stops Param from going inside. Sarabjeet and Vikram think Karan is in the pram and save him by pushing the pram. They think they have saved the baby. Sarabjeet brings Meher outside, only to learn that the pram is empty. Param tells them that Karan isn’t in the pram. Meher tells Sarabjeet that Karan is lying on the bed.

Sarabjeet worriedly enters the fire again. He gets much hurt by a sudden blast in the room. Meher shouts for Karan. Meher and Sarabjeet break down when they fail to save little Karan. Vikram runs to check Sarabjeet’s safe, thinking its a golden opportunity. He tries to enter the passcode. The safe turns too hot by the fire around. Karan cries on waking up.

Vikram hears Karan crying and finds him on the bed. He leaves his spying mission and runs to Karan. Meher and Sarabjeet get relieved that Karan is fine. They try hard to save him. Vikram saves Karan’s life by risking himself. The family watches Vikram in danger. Sarabjeet reaches Vikram to save Karan and him. He proves to be best father for Meher’s child. They both rescue Karan and hand him over to Meher. Sarabjeet hugs Vikram to thank him for his help. Vikram feels connected to Karan. Aditi asks Vikram if he is okay.

Meher asks Aditi to check Karan, he is choking. Aditi asks her to take Karan away from the smoke. She treats Karan. Aditi feels short of breath. She asks someone to give CPR to Karan. She isn’t able to give CPR since she has asthma. Vikram offers help. He gives CPR to Karan and also a new life. Karan gets normal breathing. Aditi tells Sarabjeet that Karan is weak, he has inhaled a lots of smoke, they have to keep an eye, he is critical.

Meher asks Sarabjeet to admit Karan to the hospital to keep him under observation. Aditi tells that they should better keep Karan at home. Sarabjeet wants his son to fight for his life and win. Aditi asks Vikram to get medical kit from her home. She asks Sarabjeet to get the prescribed medicines. Harleen and Robby also offer help for Karan. Sarabjeet and Vikram rush to get medical aid for Karan. Vikram connects to Meher to talk to Aditi. Everyone looks after Karan. Harleen finds Param feeling guilty and shattered. Param prays for his brother.

Harleen consoles him. She also wants Karan to get fine. The incident changes Harleen’s heart. She can’t see a little baby in pain. Sarabjeet and Vikram assist Aditi in Karan’s treatment. Karan gets fine after winning the battle. Param gets joyful. Everyone gets relieved on hearing his normal cry. Meher finds the family together while taking care of Karan. Sarabjeet tells her that they will always have their family united because of Karan.

Later, Vikram gets back to his work. He books his tickets. He plans to leave for Dubai. Sarabjeet offers him help. He thanks Vikram for the big favor. Vikram tells that Karan is like his child too, Karan is a true warrior. He wishes that Karan lives happy always. Sarabjeet hugs him. Vikram tells him that the enquiry will go on, even if they get emotional and friendly. Sarabjeet likes his honesty. He asks Vikram to not stop the enquiry and encourages him. Vikram makes a shocking plan to take his revenge on Sarabjeet.

Reviewed Rating for this particular episode Choti Sarrdarni Vikram shocking plan next 28th August: 5/5
This rating is solely based on the opinion of the writer. You may post your take on the show in the comment section below.