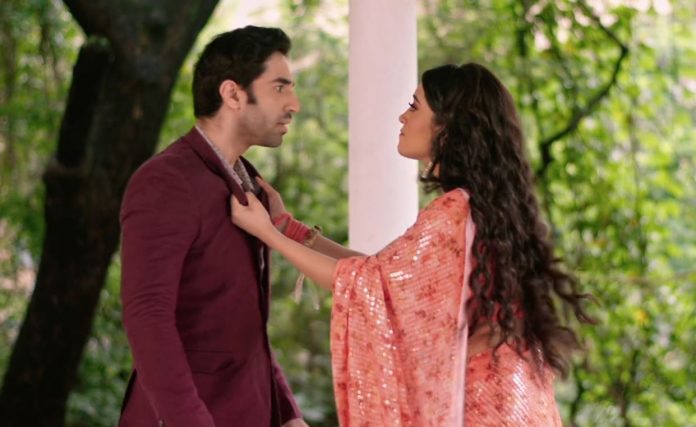 YRKKH Upcoming Story Aditya hints Kirti’s secret 4th Sept 2020 Tellyreviews.com Kirti gets threatened by Aditya. She pleads with him to not let her secret come out. She tells him that she will come to meet him if given some time to think. Aditya insists her for the meet. He threatens to send a letter for Naksh and reveal the secret that would bring a storm in her relations. Kirti gets too troubled with Aditya’s words. She tells him that she can’t fulfill his wish.

He tells her that she knows what he wants, he can’t leave his rights on the thing he owns. He asks her to return his valuable thing, referring to Krish. Kirti feels helpless and cries. Chori informs Kirti that Naksh planned an outing to the park. She asks Kirti to get ready and come fast to join them. Aditya learns that Singhanias are heading to the park. He thinks to meet Kirti there. Gayu and Naira spend good time like before.

They like the outing after a very long time. Gayu tells her that Samarth guards her so much that she feels tired of her over attention. She gets tensed when Samarth calls her. She doesn’t want to tell him about the outing, since he would like her to return home immediately. Naira handles the matter well by messaging Samarth. She tells Gayu that she is always there to take care of her sister. She just wants Gayu to be happy in her pregnancy phase.

On the other side, Chori demands a bulk amount of toys surprising Naira and Naksh. Naksh tells Naira that he will take Chori to the toy stall. Kirti accompanies him. Kirti likes Naksh’s company. She tells Naksh that she is happy to be with him. Soon, her happiness shatters when she sees Aditya behind. She doesn’t want Aditya to meet Naksh. Naksh takes care of his sisters and wife as well. He pampers Kirti. Kirti ends up getting hurt in tension over spotting Aditya. Naksh looks after her hurt foot. He doesn’t want Kirti to be in pain.

Aditya wants Kirti to come to meet him. Naira takes Chori to the corn stall and misses Kartik. She feels Kartik has come there. She gets mistaken. She realizes that the man isn’t Kartik. She goes back to Kirti. Naira finds Aditya messing up with Kirti again. She hurts him to corner him. She doesn’t let Naksh see Aditya. She gets angry on Aditya. Aditya jokes on her angry avatar. He tells her that he wanted to meet her, since they had many hits and misses.

Naira tells him that she will not let him trouble Kirti. She reprimands him for coming in Kirti and Naksh’s lives. He tells her that he didn’t come to trouble them, but to get his precious thing. He reveals about Kirti’s big secret. He hints her about the big secret which can break havoc in Kirti’s life. He angrily reveals about Kirti’s big mistake in the past which will be ruining her present and future. Naira wants to know the secret through which he is blackmailing Aditya. She asks him to reveal the truth to her.

He tells her that Kirti won’t be liking him to reveal it. Naira vents anger on him and provokes him to blurt out the truth. He gets close to blurt out the secret, but Kirti reaches them in the nick of time and stops him. She doesn’t want Aditya to reveal the truth to Naira. She tells Aditya that she will handle the matter, he doesn’t need to tell anything to Naira. Aditya tells her that it would be good if she does as he wants. Naira asks Kirti to let her know the truth and sort out the issue.

She promises to fix up things. Kirti asks Naira to leave Aditya and let him go before Naksh comes. She insists Naira to stay out of her personal matter. She doesn’t want Naira’s interference. Aditya is sure that Kirti’s life will be undergoing a big storm when the secret gets known to her husband. He is sure that Singhanias won’t spare Kirti then. Kirti doesn’t want Naksh to know the truth. She feels guilty and cries. Kirti tells Naksh that she wants to go home. Naksh gets the family home.

The child kidnappers spot Chori with the rich Singhanias. They follow Chori to kidnap her and demand a ransom from Singhanias. Chori knows about the kidnappers. She gets scared when she sees them outside the Singhania mansion. She hugs Naira out of fear. Naira wants to know the matter. Kirti sinks in guilt when Naksh takes good care of her. She doesn’t want to hurt his sentiments. She wishes to tell him the truth, but is helpless to fall in his sight. Naksh thinks she is missing Krish and crying for him. He promises to get Krish home soon. Kirti fears of losing Krish to Aditya.

Reviewed Rating for this particular episode YRKKH Upcoming Story Aditya hints Kirti’s secret 4th Sept: 4/5
This rating is solely based on the opinion of the writer. You may post your take on the show in the comment section below.