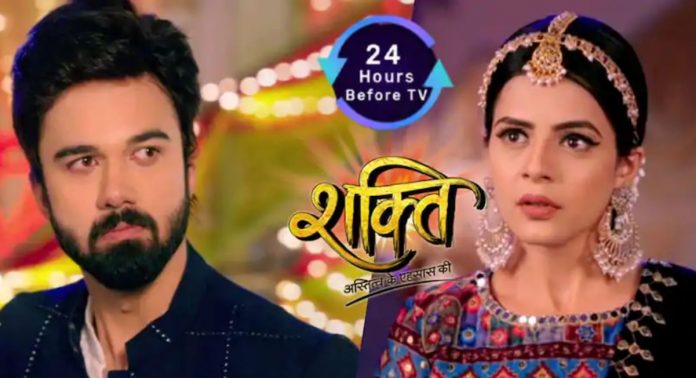 Shakti Kumkum Bhagya Raabta 16th Sept Upcoming Tujhse Hai Raabta: Vikram refuses to marry Kalyani and tells Damini that he can’t marry her whose face is completely burnt. He asks Damini not to force him to marry her. Damini tries to talk to him. Aao Saheb tries to convince Vikram, but he refuses and is firm on his decision. Malhar comes there and takes a stand for Kalyani. He asks them to stop their drama and listen to him now.

He tells that Vikram doesn’t have the status to marry Kalyani. He takes off engagement ring from Kalyani’s hand and throws on Vikram’s face, telling that Kalyani doesn’t accept this alliance. He says Kalyani is refusing your alliance proposal. Vikram gets angry and asks who is he? Malhar grabs Vikram’s collar angrily. Aao Saheb shouts at Malhar and asks him to go from there. Malhar lifts his hand and warns her not to say anything.

Shakti: Heer befriends Virat after Preeto’s permission. Virat comes home and is questioned by Jharna. He tells her that he had gone to befriend Heer which upsets her. Virat asks her not to interfere in his personal life. Harak Singh tries to make Soham understand that whatever he is doing is wrong and offers him bungalows and factories papers, but Soham turns down the offer and reveals his plan to take revenge from them for his parents’ death. He shows them Varun’s photo frame in his room and tells that he don’t need to hide it anymore.

Shanno comes there and appreciates Soham for his courage and feels pity on Preeto and Harak Singh. She records their video in which Preeto is seen pleading in front of Soham to leave Heer’s life. Preeto tries to slap her, but Shanno holds her hand and pushes her down. Harak Singh gets shocked and scolds her for insulting Preeto. Soham tells him that circumstances have changed now, and it is Shanno’s turn to rule in the house. Later, he tries to scare Harak Singh and Preeto by keeping knife on Heer’s neck. Heer gets scared and couldn’t figure out Soham’s evil plan.

Kumkum Bhagya: Pallavi and Beeji try to stop the marriage and break the mandap. They initiate the fight and throw things on the mandap. Prachi and Ranbir get tensed. Prachi is taken to the room as the marriage gets delayed for sometime. Maya’s mother asks Prachi to show her face, thinking her to be Maya. She asks if she will not lift her veil in front of her mother. She gets up and tries to lift her veil. Prachi closes her eyes with the fear of being caught.

Reviewed Rating for this particular twists in the shows overall Shakti Kumkum Bhagya Raabta 16th Sept Upcoming: 3/5
This rating is solely based on the opinion of the writer. You may post your take on the show in the comment section below.