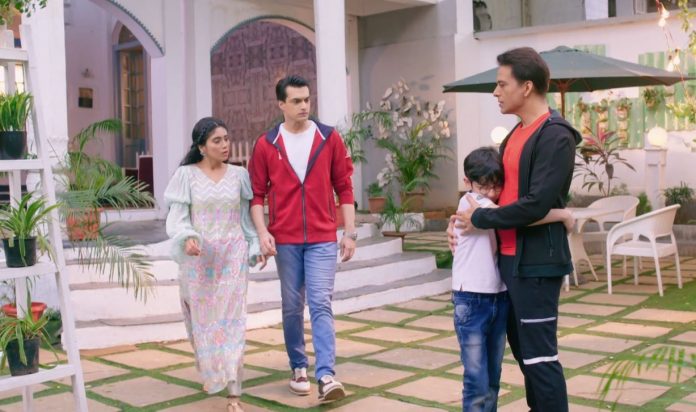 Yeh Rishta 26th October 2020 Written Update Kairav changes mind Kartik and Naira prepare Krishna for the school admission interview. They encourage Krishna that she can perform really well since she has not learnt from books, but from life. They are sure that Krishna is a smart girl, who can really pass the interview. On the other hand, Naksh prepares to meet Krish and Kirti. He wants to get Krish’s admission done in a good school. Naira tries to convince him about forgetting the issues, but Naksh differs.

Krish calls up Naksh to inform him about the school admission done by Manish. Naksh rages on knowing that he isn’t even asked about his son’s admission. He feels Goenkas are trying to snatch Krish from him. He doesn’t want Kirti to decide it all alone, as if he has no significance in Krish’s life. Krish wants him to congratulate him. Naksh is helpless to keep his cool in front of his son. He congratulates Krish.

He makes up a mind to confront Kirti for her ignorance. Bhabhimaa advises him to not spoil their terms with Goenkas by anger. She asks him to handle the matter with much care. Bhabhimaa tells him that he should calmly talk to Kirti. Naksh rushes to Goenka house. He feels he has lost all the value in Kirti’s eyes and also Goenkas. Kartik and Naira have romance in their alone time. Their moment soon breaks when the baby cries.

Kairav reaches them and receives a special gift since he has accepted Krishna as his elder sister. Kairav tells them that he is happy to get their attention and love. Kartik and Naira are grateful to him for accepting Krishna. They think that’s the best deed from Kairav’s side. They pamper Kairav a lot. Later, Kairav hides his intention of failing Krishna in the school interview. He joins hands with Krish and Vansh.

They decide to stop Krishna’s admission, so that she doesn’t get insulted by the school mates. Kairav doesn’t want more humiliation for himself and Krishna. Krishna gets prepared for the interview. Naira teaches her all the night and hopes she remembers everything. Kartik wishes all the best to Krishna. Krishna gets struck by Krish and Vansh’s plans, when they scare her and divide her focus. She forgets to answer the questions in English.

She answers everything but in Hindi language. Krish tells Vansh that Krishna will not clear the interview. Kairav doesn’t support his brothers since he feels it will be like cheating Naira. He doesn’t want to ashame Naira’s values by troubling Krishna. Naira looks for Kairav. She finds Kairav worried and enquires the reason. Kartik and Naira learn about Krishna’s interview completion. She tells them about missing few things.

Kairav worries that his plan may get known to his parents. Manish gets into an argument with Naksh when the latter arrives to confront about Krish’s admission. Goenkas don’t think they owe any explanation to Krish’s father Naksh. Naksh fumes at Manish. Kartik stops their fight and sends away Naksh home. Kartik finds Manish angry on Naira for Naksh’s behavior. Kartik and Naira get into an argument over Naksh and Kirti’s divorce matter. They decide to not fight and find a way to bring Naksh and Kirti together. Kartik tells that they have to find out if Naksh still loves Kirti. He hopes to unite the couple for Krish’s sake.

Reviewed Rating for this particular episode Yeh Rishta 26th October 2020 Written Update Kairav changes mind:4/5
This rating is solely based on the opinion of the writer. You may post your own take on the show in the comment section below.