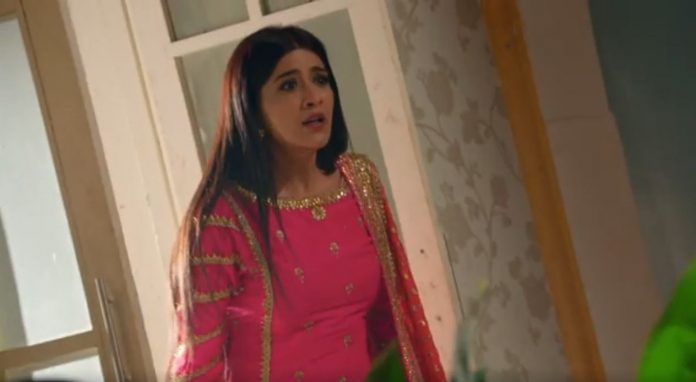 Choti Sardarni 10th November 2020 Written Update Tragedy strikes Meher A new villain enters Meher’s life, who brings a tragic storm in the family. Meher is much shocked to find Karan and Param missing. She looks for them in the entire house. She shivers in fear when she finds a staff member falling injured in front of her eyes. She finds some masked men attacking the guards. She realizes that the goons have come to target her. She doesn’t lose courage, since she has to save her children on her own in Sarabjeet’s absence. She finds Param and Karan getting cornered by the goons. She doesn’t get back.

She takes the sword from the wall antiques. She gets into Jhansi ki Rani avatar to save her children. She ties Karan behind her back and holds Param’s hand. She challenges the goons to come. Meher fights with the evil goons for saving lives. Meher proves that she is Choti Sardarni, who can never lose to life’s circumstances. She wants to find the enemy who had hired the assassins to kill her family. Sarabjeet and Meher will be fighting their new enemy.

Meher and Param visit the Gurudwara to pray for Sarabjeet’s recovery. They await Sarabjeet’s arrival at home. Sarabjeet calls Meher and informs her about the reports, which aren’t too good that he gets discharged. He tells that he will be coming home next week. Param was much excited to meet him at home. He learns that his dad won’t be coming for Diwali. Sarabjeet meets Meher and Param.

He tells them that if they get upset, he will come home on Diwali and celebrate with them. Meher asks him to take rest and become strong like before. She tells that they can push the celebrations for some days, but his recovery is important. Param takes Sarabjeet’s side. Sarabjeet tells them that he is still strong and powerful. Sarabjeet gets a challenge of 100 push ups. Meher stops him from exertion. She asks him to prove his strength by a thumb fight. She tells him that he will stay in the hospital as the doctors advised him. Sarabjeet accepts her challenge. He wants to go home if he wins.

Vikram and Aditi get ready to meet Meher for the Diwali. Seema doesn’t want to go with them. She misses Surya. Aditi insists Seema to come with them. Manav thinks it won’t be good to leave Seema alone at home. He tells that they will cancel the celebrations, since they also lost Surya. He tells that he won’t go without Seema. Seema tells that she will join them.

Manav knows that Seema is much upset without Surya. He wants to bring Karan home so that Seema gets a new hope in life. He knows Karan will end his sorrow as well. Meher and Sarabjeet have a thumb fight. Meher wins the thumb fight by distracting Sarabjeet. Param jokes on Sarabjeet’s silly defeat. Meher cheats to win. She asks Sarabjeet to take rest. Param wants to celebrate Diwali with his family. Meher is stressed about Manav. He assures that he will talk to Vikram.

Kulwant plans to meet Sarabjeet and Meher at the Diwali party and make their terms better. She tells that Sarabjeet had removed her from the party, but she can get the same post back by apologizing to him. She tells Bittu and Rane that she has a plan to get her back lost respect. Param asks for a gift from Sarabjeet. Sarabjeet is ready to give him anything. Param demands the laddoos specially prepared by Kulwant. He asks Sarabjeet to invite Kulwant in the party. Meher refuses to him. Param demands Sarabjeet to fulfill his wish. Sarabjeet and Meher are in a fix with his request. Meher doesn’t want to see Kulwant. Sarabjeet’s old enemy pays a killer to get Sarabjeet and his entire family killed. He wants his Diwali to get better.

Sarabjeet gives his statement to the media. He passes a message to Kulwant. He tells them that children love the sweets made by their grandchildren. He says I have an appeal to the grandmothers to feed sweets to their grandchildren. Kulwant laughs on hearing the sensible invite. She knows that Meher will never invite her, but Sarabjeet has done this on Param’s demand. She had taken help from Param. Kulwant wants to take laddoos for Param. She is thankful to Param for making her entry possible.

Meher is glad to see Param doing his home work on time. Harleen informs Meher that she is going in a party with Robby. Param asks her to come home on time to have a Diwali celebration with them. He tells that Kulwant is going to come home. Param makes a drawing of Rani Laxmibai. Meher tells him more about the Queen of Jhansi. She tells that every mother can become a superwoman when the need arises. She takes Param with her to the room. They find Karan crying and take care of him. Meher soon learns that there are intruders in the house. She tries to find about the staff. Param gets scared seeing someone’s shadow. He alerts Meher. Meher senses the danger and decides to protect her children.

Reviewed Rating for this particular episode Choti Sardarni 10th November 2020 Written Update Tragedy strikes Meher: 5/5
This rating is solely based on the opinion of the writer. You may post your own take on the show in the comment section below.

Saudamini’s truth is exposed by Anirudh and Trilochan. Saudamini accuses Bondita to be responsible for ruining her life. She gives a warning to Bondita. She tells that Bondita has ruined her life and filled it with sorrow, and now she shall do the same with Bondita. She accuses Bondita for snatching Anirudh from her.

She tells Bondita that its her promise to make Bondita’s life hell. She declares that she will snatch every single happiness from Bondita. She threatens to ruin Bondita’s life. She doesn’t want any peace to be left in Bondita’s life. Trilochan slaps Saudamini. He orders to leave his house and never show her face to anyone from the family. Saudamini doesn’t accept the defeat. She pledges to return to take her revenge on Bondita and entire family. Anirudh supports Bondita, seeing how evil has Saudamini become. Saudamini vows to ruin them.