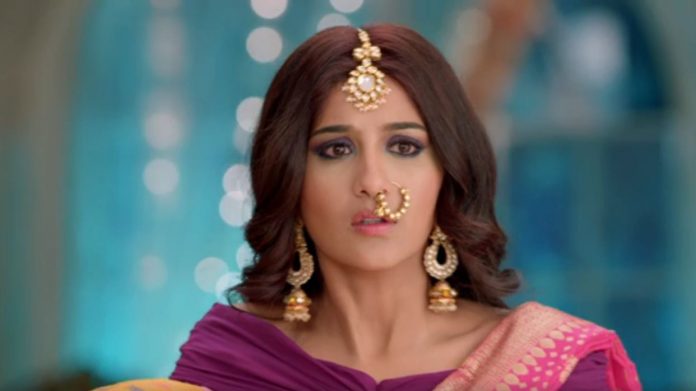 Choti Sardarni 17th November 2020 Written Update Meher’s character questioned Manav is compelled by Seema to keep his marriage with Aditi. He takes Sarabjeet and Meher aside for a talk so that Seema doesn’t know the real matter. He can’t reveal to Seema that he is Manav and Karan is his son, but he can’t lose his son because of his lie. He tells Sarabjeet that he had folded hands and pleaded him for Karan, but Meher and Sarabjeet’s heart didn’t melt for a father’s emotions.

Manav tells them that Sarabjeet Singh Gill’s wife will be questioned, her character will be questioned. He scares them by telling them that Meher will be called a bad character woman for carrying a child before marriage and cheating her in-laws. He asks Sarabjeet to decide if he wants Karan or if he wants to save Meher from character defamation. Meher is ashamed of Manav’s love, since she didn’t expect this from him. Manav tells that they are forcing him to turn bad by snatching his son. Sarabjeet supports Meher totally. He doesn’t think Manav will assassinate Meher’s character when he truly loved her.

Kulwant creates a scene in the family by insulting Bittu’s wife, who belongs to middle class. She doesn’t like the fact that she didn’t get any good gift from Bittu’s In-laws. She acts cheap like always. She doesn’t give any gift to Amrita. Amrita doesn’t care for Kulwant’s behavior. Meher cries for Karan. Sarabjeet consoles her. Meher tells him that she doesn’t want to become responsible for Aditi’s bad future. She doesn’t think the truth will hide forever. She feels guilty.

She tells Sarabjeet that Aditi will lose her happiness. She is unhappy with the fact that Manav wants to leave Aditi. She curses her past. She can’t see Aditi in trouble. Sarabjeet doesn’t want her to blame herself. He tells her that even Manav isn’t at fault, its their fate that’s playing with them. She tells him that Manav has threatened them. She doesn’t know how will they handle Manav and Aditi’s marriage. He tells that they have to handle it with care, since their mistake will cost them a lot. Seema gets a surprise from Manav.

Manav doesn’t want Seema to get upset. He prepares a dish for her. Seema wants to know when did he learn making food. He tells her that he worked at a dhaba for 15 years. He doesn’t want her to know his identity. He tells that he has learnt cooking from the internet. He apologizes for hurting her. Aditi likes their bond. Seema regrets to slap him. She tells him that he has fulfilled her dream of slapping him. He tells that he got her love in the form of slap. He hugs her. Seema asks him to just respect Aditi.

Manav tells Meher that he will prepare the milk for Karan. She tells him that Karan is sleeping. Manav asks her about Karan’s sleeping schedule. Sarabjeet tells him that parents check the baby’s schedules. He shares the sleeping schedules of both his kids. He tells him that he will also know it when he gets a child. Seema tells that Manav has already planned a child. She prays that she becomes a grandmum soon. Manav tells Seema that her prayers will be answered, she will be getting her grandson soon. Manav threatens Sarabjeet before leaving. He tells that he will handle Seema soon.

He doesn’t want to beg to them further. He decides to fight for his rights. He tells that he will go to the court to get Karan’s custody. He warns Sarabjeet that he will get the DNA test done. He reveals that Meher’s past life will be revealed to the world, the truth will ruin his political career and also Meher’s respect in the society. Sarabjeet asks him how can he talk of disrespecting Meher when he gave his life for her love. He condemns Manav for crossing his limits.

He tells Manav that he can’t get Karan by blackmailing them. He explains that they have responsibilities of their families. He asks Manav to not be angry and stubborn. Manav just wants his rights on Karan. He promises to get his son back. Sarabjeet understands his pain. He tells that his behavior is bad. Manav asks if he is right to snatch his son. Sarabjeet tells that the situation is wrong, they aren’t wrong. Manav doesn’t care for the fate or situation. He wants Sarabjeet to wait for his move. Sarabjeet asks him to declare to the world that Karan is his son. He doesn’t care for any defamation. He tells that he will always protect Meher and his sons. He asks Manav to go ahead and do anything he wants.

Reviewed Rating for this particular episode Choti Sardarni 17th November 2020 Written Update Meher’s character questioned: 4/5
This rating is solely based on the opinion of the writer. You may post your own take on the show in the comment section below.