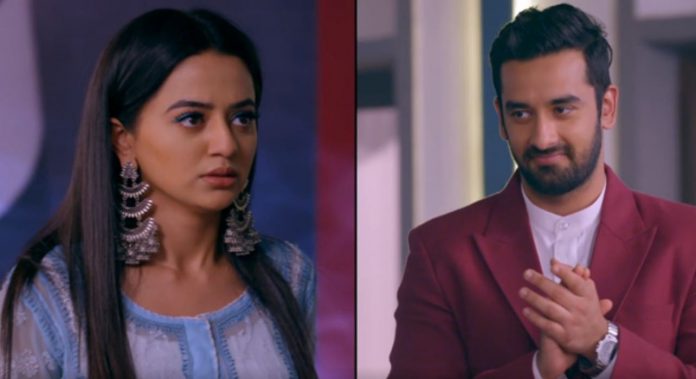 Ishq Mein Marjawan 17th November 2020 Written Update Riddhima hunts Kabir’s truth Kabir and Anupriya celebrate after fooling the family. Dadi knows the fact that Riddhima had taken the decision for Anupriya’s happiness. She blesses Riddhima for the good deed. She wants Riddhima to hand over the room keys to Kabir. Kabir tells Anupriya that they have always taken the decision by their mind, while Riddhima always decides by her heart. He tells Anupriya that Riddhima had invited a big threat in VR mansion.

Anupriya tells him that he doesn’t need to hide and enter the house in disguise, he has his total rights on the house and family. Kabir rejoices. Anupriya is happy to have her son along. Riddhima tells Vansh that she is stuck in her life, she misses him a lot, and finds hard to face Kabir again and again. Kabir wants to take over the entire house and property. Anupriya tells that his dream will be soon accomplished. Riddhima overhears their conversation.

She finds them behaving strange, as if they are at much ease, they know each other since ever. She enters the room to confront Kabir. Kabir tells that it was his dream to get his family. He tells Riddhima that he got many relations, his dream is really fulfilled. He tries to end Riddhima’s doubt, but she doesn’t trust him. Anupriya wants Kabir to just be alert of Riddhima. He asks her to enjoy the success of their mission. He doesn’t think Riddhima can find out their plans so soon. He doesn’t reveal his plans to her. He starts working out his plan to please the family.

He bakes a cake for the family. He tells them that they have lost Vansh, but they can accept him in the family. The family reciprocates to his feelings just for Anupriya’s sake. Kabir pleases them with the sugary talk. Ishani angers him by insulting on his face. She tells that he can never become her brother, Vansh. She admires her brother, who was much special. Kabir gets upset.

Dadi apologizes to him. She tells that they are worried for Siya now, they aren’t able to accept him. Riddhima doesn’t think Ishani was wrong, Kabir can’t take Vansh’s life in anyone’s heart. She asks him to just have his own place as Anupriya’s son. She sings praises of her husband. She tells that Vansh will always have his special place. Dadi wants Kabir to make his own place. The family leaves the cake specially baked for them. Kabir punches the cake in anger. He feels insulted by Ishani. He tells Anupriya that he will not spare Ishani, he will not let anyone insult him further. He wants Vansh to leave from the family’s heart.

Anupriya stops him from reacting in anger. Riddhima watches them. She wants to know why Kabir wants to take Vansh’s place. She gets Kabir’s wallet. She gets a proof against Anupriya. She realizes Anupriya was in touch with her son. She wonders if they are lying. Anupriya wants Kabir to be alert of Riddhima, who is keeping a watch on them. Riddhima follows Kabir again. Anupriya asks Kabir to forget about punishing Ishani. She wants him to think of business. She tells that Dadi had got Vansh’s entire business. She wants him to handle the will some way.

Kabir tells Anupriya that he isn’t any guest, he is at Vansh’s place, he deserves the same power and respect as Vansh. He is ready to choose any way. He tells that she has worked hard to get a place for him, but he will control everything now. He wants to teach a lesson to Ishani. Riddhima wants to know what is he planning against Ishani. Kabir hides from Riddhima. He knows he is always ahead of Riddhima. He doesn’t want Riddhima to reach the truth. He wants to punish Ishani for hurting his ego. Kabir gets dressed up like a royal. Dadi blesses him.

Riddhima finally gets a proof against Kabir. She gets the school bag receipt. She gets it confirmed by calling the shop. She realizes Kabir and Anupriya planned the fake story with a motive. She feels cheated by Kabir, who entered her life as part of his plan. She can’t believe Kabir’s huge deceive. She wants to bring out the truth in front of the family. She gets hindered by Kabir. Kabir threatens to kill her if she dares cross his way again. Will Riddhima give up easily? Keep reading.

Reviewed Rating for this particular episode Ishq Mein Marjawan 17th November 2020 Written Update Riddhima hunts Kabir’s truth: 4/5
This rating is solely based on the opinion of the writer. You may post your own take on the show in the comment section below.