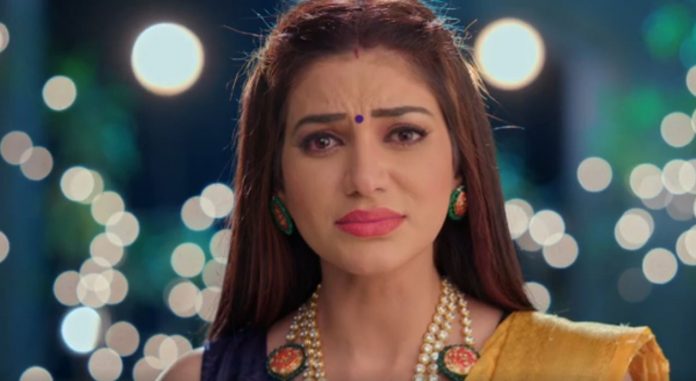 He also wants to handle the matter maturely. He wants Sarabjeet to realize that he is Karan’s father and wants Karan back. He hopes that Sarabjeet shows some understanding. He goes home with Seema and Aditi. Sarabjeet relieves Meher from the tension. She wants to know if Manav has threatened Sarabjeet once again. He doesn’t want her to worry so much that their tensions reach their children. He asks her to stay happy for the sake of their children.

He tells that they should always stay happy and not think of the future. He makes Meher smile. He falls for her smile. She feels lucky that he has come in her life. Manav misses Karan. He had promised Karan that he will celebrate Diwali with him. He has failed in his promise.

Harleen gets a backache when she lifts Param out of happiness. She asks Sarabjeet to call a doctor for her. Meher diagnoses her problem. She asks Harleen to just believe her, she can relieve her pain. Sarabjeet asks Meher if she is sure that she can sure Harleen. He bets Meher. He wants Meher to give him a kiss if he wins. He tells that he will give her a kiss if she wins. Meher treats Harleen. Harleen admits that Meher’s trick really worked. Meher proves her word. Sarabjeet knows Meher is very talented. Param calls Meher great. Sarabjeet teases Meher about the bet.

Harleen tells Sarabjeet that Meher’s hands have magic. She tells that Meher is just opposite of Kulwant. She tells that Meher is very calm, unlike her mother, who is a storm. Kulwant spends time in fooling her Bahus. She catches Amrita’s lie. She wants to know the reason for Amrita’s lie. She gets to overhear Amrita’s conversation on call. She learns that Amrita is planning to give her gold chain to someone to sell it off. She wants to teach a lesson to Amrita. She wants to see whom is Amrita going to give the chain secretly.

Aditi helps out Manav. She finds Meher’s dupatta in his coat. She suspects that he is having an affair. She wonders whose dupatta is it. She happens to overhear Seema and Vikram’s conversation. Seema is upset to know that Vikram is thinking to divorce Aditi. She wants to know if he has an affair with someone. She asks the name of the girl he is dating. She wants the answers.

Aditi is also shocked to know that Vikram is wanting to divorce her. Seema asks Vikram why did he say such a thing. He wants her to take medicines first. He doesn’t answer her. He wants to excuse himself. Seema doesn’t let him go. She knows that Vikram and Aditi have differences. She demands to know the truth. Aditi realizes that Vikram loves someone else. She breaks down. She wants to reach Meher and Sarabjeet to tell them that Vikram doesn’t love her.

Aditi realizes that Vikram never loved her. She can’t believe that he lied to her that he loves her. She knows it now that she isn’t special for him. She repents for believing his fake love. She wants an answer from Vikram. She meets Sarabjeet, Meher and Harleen. She tells them that Vikram wants to divorce her. She tells that there is someone in Vikram’s life. She shows the dupatta to them, that belongs to the girl Vikram loves. Harleen identifies the dupatta and tells that its Meher’s dupatta. Sarabjeet and Meher are shocked to answer Aditi and Harleen. They don’t know what to say and how to save Aditi’s future. What will Meher and Sarabjeet do now? Keep reading.

Reviewed Rating for this particular episode Choti Sardarni 18th November 2020 Written Update Shocker for Aditi: 3/5
This rating is solely based on the opinion of the writer. You may post your own take on the show in the comment section below.