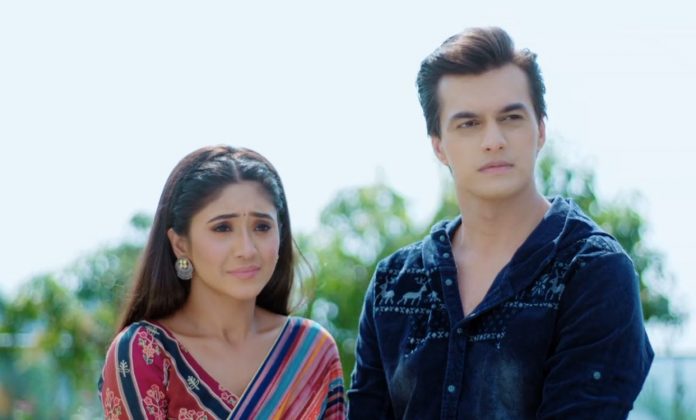 Yeh Rishta Naira risky move 7th December 2020 Written Update Kairav runs his way to see his sister. He finds someone else in the cot. He realizes that the baby isn’t Akshara. He feels he is missing Akshara a lot that he had seen her. Kartik and Naira have made Akshara away in time. Kairav cries for Naira and Akshara. He wants to meet them. She wishes the day comes soon when she meets Kairav. Kartik tells that the day will come soon. He goes to attend Kairav.

Lav misses Naira, who always kept the family united. Kairav gets glad to see Naira, who cares for him. He realizes that its Kartik with him. He longs for Naira. Kartik realizes his longing and wishes that the happy family gets back together soon. He asks Kairav to see the gift sent by Naira and Akshara for him. He doesn’t insist Kairav to check the gift. He rushes to see Kairav’s reaction.

Kairav happily checks the gifts. Kartik asks Naira to see Kairav responding to their emotions. Kairav is still affected that Naira wanted to send him to jail. The misunderstanding makes them part away. Naira gets glad that Kairav is changing his mind gradually. Later, Kartik and Naira meet on their cycling trip. They discuss about planning a new surprise for Kairav. She tells him that her idea will work. He tells that he had to handle the work after attending Kairav.

Kartik surprises Naira in his unique ways to show his love. Kartik tells her about Riddhima, who is his old friend. He tells that Riddhima is giving undivided attention to Kairav and helping them a lot. He wants Naira to keep loving him. Riddhima’s friend spots her and realizes that she is back from the US. Riddhima ignores her friend’s call. She behaves weird. Kartik and Naira spend moments of leisure. They come across Riddhima’s friend.

Riddhima advises Kartik and Naira not to rush in changing Kairav’s mind. She removes Naira’s surprise from Kairav’s room. She tells Naira that their one mistake can cost them a lot, even if Kairav is showing progress. She tells that their expectations seem high. Naira tells that she is Kairav’s mother and knows that he is ready to meet her. Riddhima and Naira get into an argument when the former suggests her not to force Kairav. She wants Naira to let her handle Kairav’s therapy.

She tells that she doesn’t want to involve Kairav’s parents at this time. Kartik tells that Kairav can express his feelings by his paintings. Naira tells that they can just make a try and know it. Riddhima wants her to wait until she finds some way. She stops Naira from her emotional approach. She wants Naira to keep faith on the therapy. Kartik knows Riddhima will do the best for Kairav.

He wants her to know Naira’s ideas once. He hopes that Naira’s idea will work. Naira tells that if the idea doesn’t work, Riddhima will handle Kairav. Riddhima finally gives in. Riddhima meets Kairav and tries to remind him of Naira. She brings positivity in Kairav. She asks Kairav to express his thoughts using his paint brush. She offers the painting kit to see if Kairav would try it once. Riddhima sees her lost child in Kairav. She starts distancing Naira from Kairav.

Reviewed Rating for this particular episode Yeh Rishta Naira risky move 7th December 2020 Written Update: 4/5 This rating is solely based on the opinion of the writer. You may post your own take on the show in the comment section below.