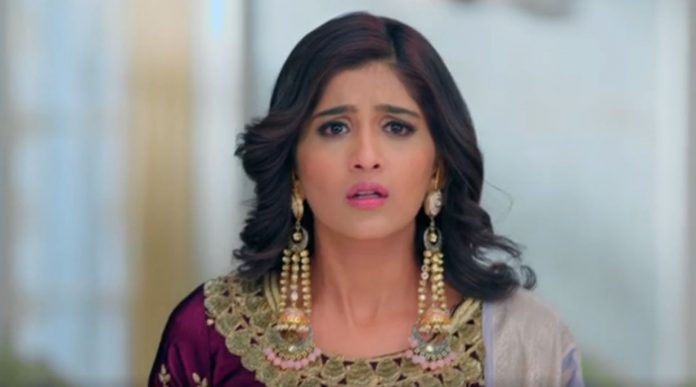 She wants to leave Sarabjeet and go away. She prays for Sarabjeet’s happiness. She knows he has memories with the house where he was born. She doesn’t want him to lose the house. She feels she is unlucky for him. Sarabjeet is hurt to know that she wants to leave him. He tells her that he will die if she leaves from his life. He asks her not to feel guilty, she isn’t responsible for anything. He asks her to pack the bags. She wonders where she will take her sons. Param cries that the birds’ nest broke.

He asks where will the birds go. Meher sheds tears. Vikram tells Aditi that she is being mad, she is wrong to force Sarabjeet and Meher to leave. Aditi tells that she is fighting for their rights, she is doing this to get Karan. He tells that he doesn’t want any property. She tells that Sarabjeet and Meher will lose in few days and come back with Karan. He tells that even Karan will be homeless. She asks him to understand her plan. He wants to know how will they raise Karan.

She tells that they will ask for Karan’s custody, proving Sarabjeet and Meher incapable to raise Karan. She is very sure that her plan will work. Manav feels bad. Sarabjeet and Meher explain Param that birds are strong and will make a new nest for themselves. They find a good chance to explain Param. He tells that a storm has broken their house and they have to make their new house. He asks Param to help his parents in making a new house. Param agrees to play the game and win.

Sarabjeet and Meher cry after tricking Param. Param is excited to make a new house. Yuvi informs Kulwant that Param had called and told him that his parents are playing a game and leaving the house. Kulwant doesn’t understand. Amrita tells her that Harleen had called to share the same news, Aditi had claimed the property and ousted Sarabjeet and Meher from the house. Kulwant can’t believe that Aditi is so clever.

Pathak calls Kulwant for the party meeting. Kulwant doesn’t know if she should go to help Meher in the tough times. Harleen asks the lawyer to file a case against Aditi. Sarabjeet orders the lawyer not to file any case against his sister. He asks Harleen not to hurt Aditi. He is happy to make the sacrifice. Harleen tells that its their dad’s mistake to cheat them. She can’t tolerate to see him in sorrow. She tells that he is making a big mistake by giving away everything. She asks him to think of Param, how will he keep Param without the comforts.

He tells her that Param is strong, he will manage without the comforts. Param packs the toys. Meher asks him not to get any toys for himself. He asks about Karan’s toys. She asks him not to carry anything. She explains him the game rules. Param tells that he will follow the rules. She asks him to get ready. She prepares him for the tough life. Harleen tells Sarabjeet that he can stay in a suite like a vacation until the matter gets resolved. Sarabjeet doesn’t want to take any help.

He abandons his property, business and luxuries. He doesn’t want to keep any money. She asks him how will we stay. He tells that he will handle it. She wants him to take Param’s consent by telling the truth. Param bids bye to his toys. Harleen feels bad for him. Param tells that he will win the game and come back. Harleen can’t see the sight of sorrow. Sarabjeet asks Meher not to worry. Meher has no tensions until Sarabjeet is with her. She feels proud that he is sacrificing everything for Karan’s sake. Harleen bids an emotional farewell to them.

Reviewed Rating for this particular episode Choti Sardarni Life changer twist 11th December Written Update: 2/5 This rating is solely based on the opinion of the writer. You may post your own take on the show in the comment section below.