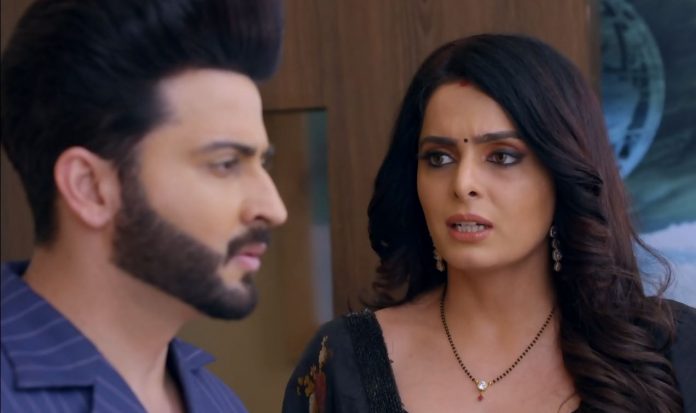 Kundali Bhagya 14th December 2020 Written Update Sherlyn Mahira caught Preeta is tensed that anyone can see her sleeping in the living room. She doesn’t want anyone to know the differences between Karan and her. Karan misses Preeta. He doesn’t want to fall in her words. He boasts of himself as the smart guy. Preeta sleeps in the living room. She had hidden her slippers as well. Kareena finds Preeta at night and realizes that Karan and Preeta don’t have a good relationship of a husband and wife.

She is happy to know their differences. She plans to use this fact against Preeta. Karan reaches Preeta and lifts her in arms to take her to the room. Preeta is awake and acts sleepy to trouble him. They get into a pillow fight when he realizes that she is just fooling him around. They get into a romantic moment after finding solace in each other’s arms. He tells her that she looks really beautiful when she smiles.

He wants her to always smile. Preeta runs to the room and locks the door. She asks Karan to go and sleep on the sofa in the living room. She doesn’t pity him and makes him out of the room. She tells that he has fought with her and have bad habits, this is the result of his attitude. She tells that the scores got equal. He tells her that he has got her to the room just to get saved from Bani and Kareena’s sight. He tells that he didn’t wish Preeta to feel bad. He actually got her to the room by respecting her feelings.

He doesn’t tell her the actual reason. Karan lets her sleep in the room. He goes to sleep in the living room. Kareena finds Karan sleeping on the sofa. She gets angered that Preeta had ousted him. She thinks how dare Preeta does this. She wants to scold Preeta. She goes to meet Preeta. She doesn’t think its good to talk to Preeta at night. She wants to use the truth against Preeta when the right time comes. Preeta wakes up in the morning. She goes to Karan to wake him up and take him to the room.

He asks her to promise that she will never misbehave with him. She promises. He demands a sorry from her. She apologizes to him. He tells her that she needs to do sit ups as well. She obeys him. She wants him to just come to the room. He demands her to tell five good things about him. She tells him that he is really good-looking guy with a nice smile. He asks her not to praise him much that he falls emotional. He demands her to lift him and take him. She refuses to his final demand.

He tells her that he was just joking, she shouldn’t get upset, he would have gone to the room any how without her apology. She realizes that he was just teasing her. Sherlyn wants to know what’s Mahira planning now. Mahira wants to impress the family by her cooking skills. She asks Sherlyn to guide her. She tells that she doesn’t know cooking, she can just fool the people. Sherlyn tells that Preeta is smart enough to learn cooking, Preeta cooks food well and also makes good tea. She doesn’t know how will Mahira outdo Preeta in cooking. Mahira tells that Preeta will be playing some other move against them.

Sherlyn doesn’t want Preeta to win. Sherlyn lies to Preeta when the latter comes. Preeta asks Sherlyn not to make fake stories. She is happy to see the fear in Sherlyn’s eyes. She tells that the eyes always show the truth. Preeta makes the tea for the family. She asks Sherlyn not to spoil the tea. She goes to meet Rakhi. Sherlyn tells Mahira that they will spoil the tea to spoil Preeta’s image. She asks Mahira to lie to the family that Preeta added the salt in the tea. Rakhi tells Preeta that she needs to talk to her. Karan tells Preeta that room geyser isn’t working. Preeta tells that she will call the electrician.

Sameer and Kritika have a silly argument and tease the newly weds Karan and Preeta. Rakhi assumes Karan and Preeta to have taken their relationship to the next level. She blesses them. Mahira tells Sherlyn that the family will dislike the tea. Kareena catches them red-handed. She confronts Sherlyn and Mahira for adding the salt in the tea. She reprimands both of them for their bad idea. She asks them if they want to trouble the family, if they want the family to insult Preeta for the terrible tea. Will Kareena also support them in the evil? Keep reading.

Reviewed Rating for this particular episode Kundali Bhagya 14th December 2020 Written Update Sherlyn Mahira caught: 3/5 This rating is solely based on the opinion of the writer. You may post your own take on the show in the comment section below.