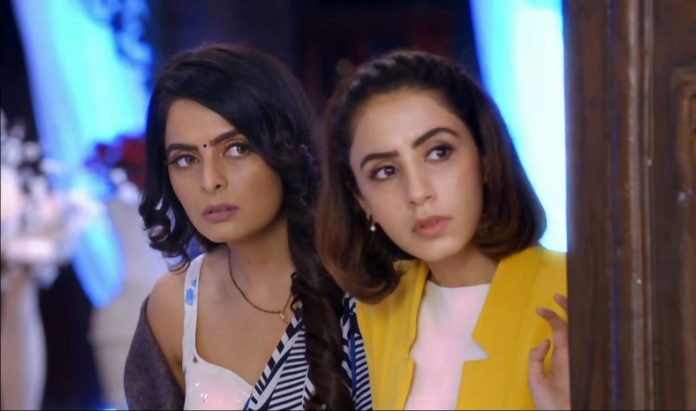 Kundali Bhagya Sherlyn Mahira secret 21st December Update Karan and Preeta enjoy their time on their honeymoon trip. She tells him that she has seen Mahira at the resort. Karan doesn’t think she has really seen Mahira. Sameer and Rakhi return home from Sarla’s house. Kareena confronts Rakhi for visiting Sarla. She tells Rakhi that Mahira is suffering from a headache, she doesn’t need anyone to disturb her. Sameer doesn’t think Mahira can have a headache when she hurts others. Rakhi wants to see Mahira once. Sameer wants to know what is Mahira and Ramona planning now.

Kareena stops Rakhi from going to Mahira. Rakhi tells that Rishabh has called her to inform that he will come home in some days once the work is handled. Sameer praises Rishabh. Rakhi misses both her sons. Sameer tells that he will call Rishabh home. Rakhi tells that she doesn’t want to disturb Rishabh. Kareena asks Sameer to sleep early and handle the office work. Preeta follows Mahira to confront her. She calls Sameer to know if Mahira is at home. Sameer tells that Mahira is resting because of headache. He wants Preeta to spend time with Karan.

He teases her for loving Karan. Preeta warns him to stop being with naughty Shrishti. Shrishti feels bored up. She calls Sameer. Sameer tells her about Preeta’s doubt on Mahira. Sameer and Shrishti decide to find out Mahira’s truth, if she is really at home or not. Shrishti asks him to find out Mahira and Sherlyn, it can’t be believed until they see the evil duo by their own eyes. She wants him to check on Mahira himself.

He tells that he won’t check, else he will get scolded by Kareena. She insists him to check once. Shrishti knows that Mahira can do anything to torture Preeta. Sameer tells her that he can see Mahira sleeping. Shrishti asks him to just remove the blanket and check Mahira’s presence. He is shocked to see pillows in Mahira’s place. He tells her that Mahira and Sherlyn aren’t at home. Shrishti understands that Preeta has really seen Mahira. Mahira goes to meet Sherlyn. Shrishti asks Sameer to make arrangements for their trip to Manali to help out Preeta.

Mahira and Sherlun spot Preeta and hide from her. Preeta tells Karan that she has seen Mahira once again. She fails to track Mahira and Sherlyn. Karan doesn’t believe Preeta. He wants her to focus on spending time with him. Preeta is jealous to see the female fan attention. He tells her that he has written his name as Karan Preeta Luthra. He has stunned his fan by adding his wife’s name. Mahira gets upset. Sherlyn stops Mahira from any such mistake. Mahira wants Sherlyn to arrange a pill. Karan gets mad for Preeta. Sherlyn tells that they should stay in the opposite room of Karan and Preeta’s room so that they can keep an eye on them.

Karan jokes that there is no attraction between Preeta and him. His romantic flirting makes her feel uneasy. She knows his funny liners. She tells him that she will also make a joke of him and make him remember. Sherlyn shows a drug pill to Mahira which will help her in winning Karan. Mahira gets glad with Sherlyn’s assistance. Sherlyn asks Mahira to just spike Karan’s drink and get him. Karan and Preeta begin to know each other, unaware of Mahira’s evil conspiracy.

Reviewed Rating for this particular episode Kundali Bhagya Sherlyn Mahira secret 21st December Update: 3/5 This rating is solely based on the opinion of the writer. You may post your own take on the show in the comment section below.