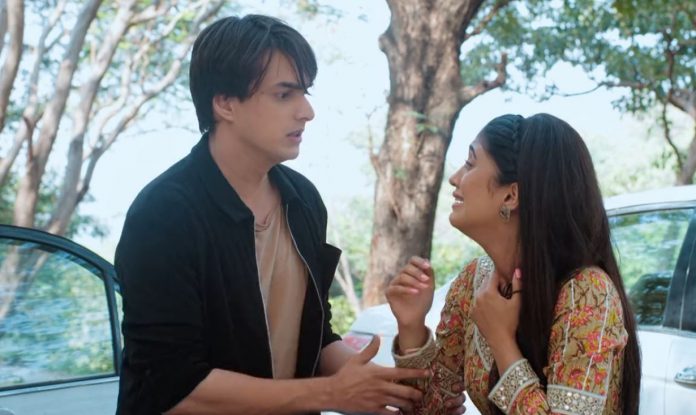 Yeh Rishta Kairav faces peril 21st December 2020 Written Update Kartik and Naira are in shock after knowing Riddhima’s mental issues and her lies. Kartik tells that Riddhima said she is practicing in the US and is going to come to treat Kartik just for the sake of their friendship. He tells that Riddhima’s life purpose is to treat children. Naira tells that Riddhima’s target is Kairav. They look for Kairav. Kairav plays with the kids. Kartik doesn’t think Naira should worry.

Naira tells him that something wrong is going to happen. Kairav goes to meet Riddhima. Sudha tells Naira that Kairav was around, he just went. She doesn’t think they should worry. Kartik and Naira don’t find Kairav in the parking lot. They fear that Riddhima took Kairav with her. Riddhima takes Kairav away from them. She believes that Kairav is her Arjun. Kartik calls up Riddhima to know if she left for the airport.

Riddhima doesn’t answer his calls. Naira blames Riddhima for stealing her son. Kartik tells that Riddhima was helping Kairav, she would never hurt him. Naira tells that Riddhima is seeing Arjun in Kairav, their Kairav is in risk, Riddhima would try to take him far from them. Kartik gets convinced when Naira explains him about her doubts. He takes help from the police. Naira calls the health centre to know about Riddhima’s background.

They learn that Riddhima was facing mental issues and seeing her son Arjun in every kid. Kartik believes Naira further after hearing the doctor’s statement. They learn that Riddhima has taken Kairav to the airport. Riddhima stops Kairav from calling Naira. She tells that Kartik and Naira would be coming to the airport. Riddhima takes Kairav somewhere else. She doesn’t want anyone to track her. Meanwhile, Dadi’s health deteriorates because of Kartik’s absence in the house. The family is at her care.

Dadi tells them that she has lost her self-will to leave the world. Suwarna fears that someone in their family is at risk, since Dadi’s condition is giving such a hint to them. Manish doesn’t want them to have such negative thoughts. Akhilesh suggests that they inform Kartik about Dadi’s condition. Kartik blames himself for bringing Riddhima in Kairav’s life. Naira tells that he has done it for Kairav’s betterment. They don’t want Riddhima to snatch their child. They stay stressed and ignore Manish’s calls.

They don’t want the family to know their huge problem. They make a wish that Kairav finds a way himself and gets free from Riddhima’s clutches. Kairav has been trained by Kartik and Naira. He recalls the way they taught him to react on feeling harmed, kidnapped or trapped. He reacts the same way to get rid of Riddhima. He tries to call up Kartik and Naira. Naira stays busy in talking to the police. Kairav feels helpless.

Kartik wants to rush to the airport and find Kairav. Kairav gets a stranger’s phone to call Naira once again. He asks the person to inform Naira about him. Kartik tracks Riddhima’s phone location. Kartik and Naira realize that they have got calls from Riddhima’s number. They wonder if Kairav had called them for help. They get informed about Kairav, who was asking for help. They get a clue to reach Kairav. Dadi summons Kartik. Manish tells that Kartik is careless to not answer their calls.

Dadi’s condition worsens. Kartik and Naira meet the person who had called them on Kairav’s behalf. They gather more information. Kairav has sensed the danger. He tries to leave clues for his parents. He knows that they will track him some way. Riddhima grows mad in anger when she finds Kairav behaving over smart. He tells her that he isn’t Arjun, he isn’t her son. He confronts her for kidnapping him.

Riddhima wants him to acknowledge her motherly love. Naira is confident that Riddhima can never hurt Kairav, for the fact that she sees Arjun in him. Kartik and Naira follow Riddhima’s car. They are misled. Riddhima and Kairav meet with an accident when Kairav tries to escape. Riddhima doesn’t let him run away. Kairav shouts for help. She falls in deep danger. Will Kartik and Naira be able to find Kairav and save his life? Will Riddhima save Kairav from the dangerous fall? Keep reading.

Reviewed Rating for this particular episode Yeh Rishta Kairav faces peril 21st December 2020 Written Update:4/5 This rating is solely based on the opinion of the writer. You may post your own take on the show in the comment section below.