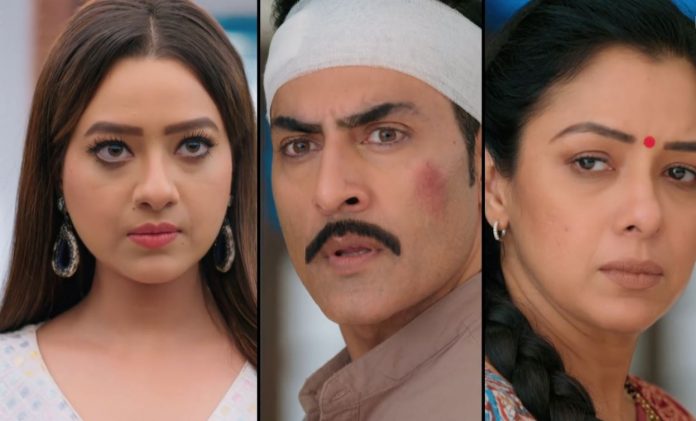 Anupama Written Update Kavya startling act 12th January Vanraj falls down the bed. Anupama gets much concerned for him. The entire family rushes to see Vanraj. Anupama wants Paritosh to see if Vanraj’s stitches are okay. Vanraj doesn’t want anyone of them to worry for him. Leela tells that Anupama will take care of Vanraj. Kinjal doesn’t want Leela to put Anupama in a fix. She argues with Leela while taking a stand for Anupama. She asks Leela not to force Anupama. Anupama doesn’t want them to fight for her sake. She does her duty towards Vanraj. Kinjal can’t stand Anupama losing her esteem.

Vanraj tells that he is getting a relief by her care. He hopes that everything gets fine with time. He tells her that he is feeling happy to get scolded by her. He starts changing towards Anupama. Paritosh asks Kinjal not to fight with Leela all the time. She asks him to open his eyes and see Anupama’s pain. He doesn’t think Anupama has any issues with Vanraj. She tells that Anupama is doing this for the sake of humanity. She has a problem with Vanraj staying in the house. Pakhi meets them and humiliates Kinjal.

She behaves badly just to upset Kinjal. Paritosh takes a stand for his wife. Pakhi doesn’t want Kinjal to interfere in the elders’ matters. He doesn’t understand her attitude. Pakhi is happy that Anupama is giving all her time to Kinjal. Paritosh complains to Anupama about Pakhi. Anupama tells Pakhi that she can’t enter Paritosh’s room without seeking the permission. She doesn’t want her to touch Kinjal’s stuff without her permission.

Pakhi asks Anupama if she is supporting Kinjal for the fact that Kinjal is against Vanraj. She tells that Anupama is planning to oust Vanraj from the house. She wants Vanraj to stay with them. She threatens to leave the house if Anupama ousts Vanraj. Anupama defends Pakhi who is just insecure. She tells that Pakhi doesn’t want to lose her dad. She asks Paritosh to understand Pakhi’s insecurities. She wants them to give some time to Pakhi. On the other hand, Kavya packs her bags to shift to Vanraj’s house. She doesn’t want to believe Anupama’s word.

She has no faith on Vanraj as well. She wants to take the matter in her hands. Vanraj wants Anupama to talk to the doctor about his appointment. He is thankful to her. He tells that he is guilty to spoil everybody’s normal routine, he has come to find peace in the house, but he has become a burden on them. Anupama tells that he is a guest and would leave soon after getting recovered. He wants to handle the new boss and earn money to settle his children well.

She asks him to leave his tensions, once he can earn well, his relationship with Kavya will also get retained. She expresses that she doesn’t want him back. Vanraj doesn’t know what he wants in his life. Paritosh and Kinjal share their future plans with Vanraj and Anupama. Leela tells that Anupama and Kinjal can’t go for jobs by leaving the work on her. Anupama assures that she will finish her work before going. Kinjal suggests that they should hire a cook. Leela taunts that she isn’t getting Vanraj’s income this time.

Hasmukh tells that Paritosh will also start earning along with Anupama and Kinjal. Kavya arrives home to shock them. Kinjal tells Vanraj that she had called to get Pramod’s car. She wants Leela to accept her family as well. Leela congratulates Anupama to get such a knowledgeable Bahu. Vanraj stops Kinjal from misbehaving with Leela. He tells that he will go by walk, instead taking help from Rakhi. He doesn’t want to take Rakhi’s favors.

Anupama asks Kinjal to let Paritosh join the coaching classes if she thinks that its not a favor on them. She further mentions what Vanraj wanted to convey. Vanraj doesn’t want to sit for long. Anupama takes Vanraj to his room. Kavya happens to see them. Nandini stops Kavya from ruining peace for Shah family. Vanraj and Anupama realize that Kavya has come to stay with them. Anupama leaves her rights on Vanraj. Kavya claims to love Vanraj. Keep reading.

Reviewed Rating for this particular episode Anupama Written Update Kavya startling act 12th January: 4/5 This rating is solely based on the opinion of the writer. You may post your own take on the show in the comment section below.