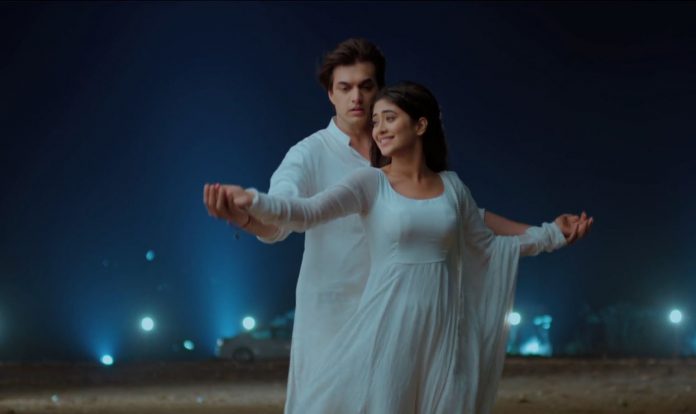 She wants him to know that she is just a call away, the moment he closes eyes and misses her from heart, she will be appearing in front of him. Kartik actually hallucinates her. She conveys her emotions to him since she couldn’t bid bye to him by the sudden twist of fate. She asks Kartik to know that she didn’t wish to die, but the fate was rigid to take her away from them. She makes him recall the way she got saved from calamities, and even then she died because of her destiny. She wants Kartik to accept the fate just the way she had accepted. She tells him that she had a dream to live with him, but all her dreams and left incomplete just like their love story.

Kartik tells her that he wants her back even when she reasons out that there is no way back from heaven. He tells that he can also die and come to her. She doesn’t want him to die like a coward by leaving his family responsibilities behind. She tells him that one can’t help the family by dying, one can only help when life is on his side.

She asks him to bring good change in his life by fulfilling the responsibilities of the kids. He tells her that whatever she tells him, she should be with him so that he does his duties. He gets rigid that he will die and come to her. She makes him see his family, wanting him, needing him by their side in the sorrowful phase.

She tells him that Kairav and Akshara need their father. He tells her that she is making him feel guilty by making him know his duties. Gayu has much regrets that she couldn’t say sorry to Naira and win her forgiveness. Gayu wants Naira to come back to her. She promises to be a good sister. The family prays that Kartik comes back safely home. Kartik is hell bent to die and meet Naira in the heavens. Naira tells him that its time that they get apart, but she will always be with him. It gets painful for Kartik to let her go. He decides to move on in life. He wants to take care of his children.

Reviewed Rating for this particular episode Yeh Rishta Kartik rigid move 13th January 2021 Written Update: 4/5 This rating is solely based on the opinion of the writer. You may post your own take on the show in the comment section below.