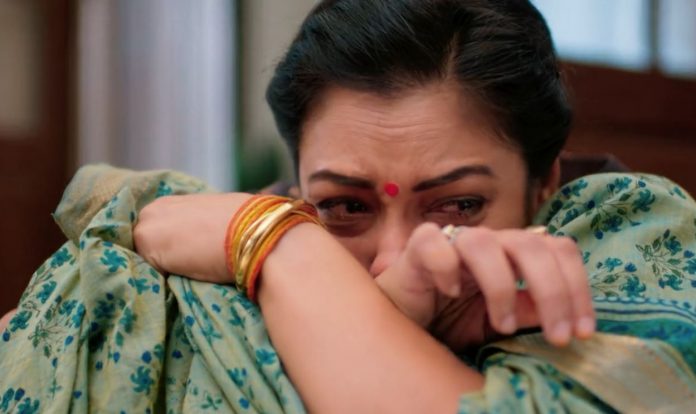 Anupama 5th February 2021 Written Update Revolt time Anupama is much raged at Vanraj for calling her mentally unstable and filing for divorce. Kinjal and Samar support Anupama. They want her to calm down. Anupama tells that she will not care for Vanraj now. She wants Vanraj to know that she is just letting him live in peace. Samar asks her not to misunderstand the situation. Kinjal tells that Anupama started talking after 25 years, so Vanraj wants to break her courage.

Anupama doesn’t want to lose her courage. Samar wants her to give an answer to Vanraj. Paritosh asks Samar to stop provoking Anupama against their dad. Samar tells that Vanraj isn’t her dad. Paritosh can’t hear anything against Vanraj. He defends Vanraj. The brothers fight because of Vanraj. Anupama gets worried when the family undergoes tension. Paritosh feels Anupama is responsible for angering Vanraj. He tells that Anupama is wrong to hurt Vanraj’s ego. He asks Anupama to take the legal notice’s reaction from Vanraj. Samar pities Paritosh’s thinking.

He challenges her. He answers Vanraj and Kavya. Kinjal wants Paritosh to support Anupama, but he doesn’t listen. Leela tells Anupama that she broke the house, her esteem fight has broke the family into two halves. She blames Anupama for ruining everything. Leela and Hasmukh also get into an argument because of Anupama. Hasmukh defends Anupama. Leela tells that Samar may do anything in anger. Vanraj asks Samar to return home. Samar misbehaves with him. Kavya asks him to get out. Samar tells Vanraj that he needed Anupama when he was ill, he is selfish, egoistic and self-centred. He tells him that he changed a lot to get back to the family.

He asks him why did he behave nicely with Anupama. He tells that he should have been an actor. He asks Kavya not to interfere between them. He tells Vanraj that he would have not spared him. He doesn’t care for his dad now. Vanraj asks him to know his limits. Samar tells that he is ashamed to call him his dad. Kavya humiliates Anupama to further anger Samar. Samar warns her against ruining Anupama’s name. He strongly opposes Vanraj and Kavya.

Anupama breaks down seeing the house division happening because of her failing marriage. She still has supporters in Samar, Kinjal, Hasmukh and Mama ji. She is worried for Samar. Mama tells that he will call Samar home. Samar tells Vanraj that he will not raise hand on him, but he will not stop himself if Vanraj hurts Anupama. Kavya tells Samar that Anupama would have sent him to hurt them. She provokes Samar to hit her. Vanraj asks her to stop the nonsense. Samar reacts on Kavya’s provocation.

He tells that his anger can’t conquer his mind to ruin Anupama’s upbringing. He tells that he isn’t like Vanraj. He respects women, and can’t hurt them. Kavya wants Vanraj to handle the matter. She threatens to handle it her way. She tells that he should have answered Anupama and Samar. She files a complaint against them. She gets revengeful. Vanraj is much worried seeing the way things are going out of his control. Samar gets arrested on Kavya’s complaint. Anupama reaches Kavya to threaten her. Anupama fights back and shows her daring side to protect her children. What will happen next? Keep reading.

Reviewed Rating for Anupama 5th February 2021 Written Update Revolt time: 3/5 This rating is solely based on the opinion of the writer. You may post your own take on the show in the comment section below.