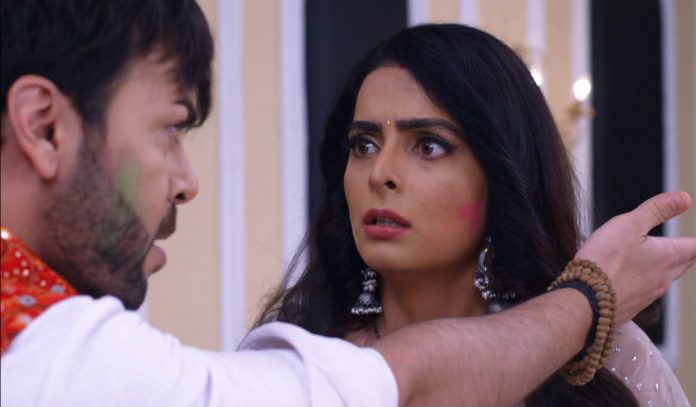 Kundali Bhagya 1st April 2021 Written Update Prithvi blurts truth Sherlyn finds Prithvi doing a mistake by falling in Preeta’s plan. She wants Prithvi to not drink the bhaang furthermore. She thinks Prithvi may blurt out their truth if anyone takes an advantage of his intoxicated state. She tells Prithvi that he shouldn’t drink more thandai. Prithvi doesn’t listen to her. He goes on drinking to win over Karan. He wants to defeat Karan and show Preeta who is the real man, her real lover. He finds a way to impress Preeta. Preeta has laid the trap for him to expose his truth. She acts charmingly to fool Prithvi.

Sherlyn tells that its possible that Mahesh recovers. Karan and Preeta work on their plan against Prithvi. They try to find out who else is assisting Prithvi in his evil plans. Preeta wants to know who else is working with Prithvi, so that she breaks down his team and then targets him.

Barrister Babu:
Bondita plans to spoil Anirudh and Manorama’s wedding night. She sprays the itching powder on Manorama’s clothes to cause the discomfort so that Manorama doesn’t spend the night in Anirudh’s room. She wants Manorama to stay away from Anirudh. Manorama isn’t aware of Bondita’s plans. Even Anirudh doesn’t guess this. He doesn’t know that Bondita’s mind is changing, she has been growing more insecure with time.

He wanted Bondita to get heartbroken by his second marriage and focus on her studies to become a good barrister, but Bondita chooses the other path of revenge. Bondita can’t see Anirudh living a happy married life by breaking her heart. She settles scores with Anirudh and his second wife Manorama. She enjoys Manorama’s plight. Will Bondita go on a wrong path with Anirudh’s shocking deceive? Keep reading.

Reviewed Rating for Kundali Bhagya 1st April 2021 Written Update Prithvi blurts truth: 3/5 This rating is solely based on the opinion of the writer. You may post your own take on the show in the comment section below.