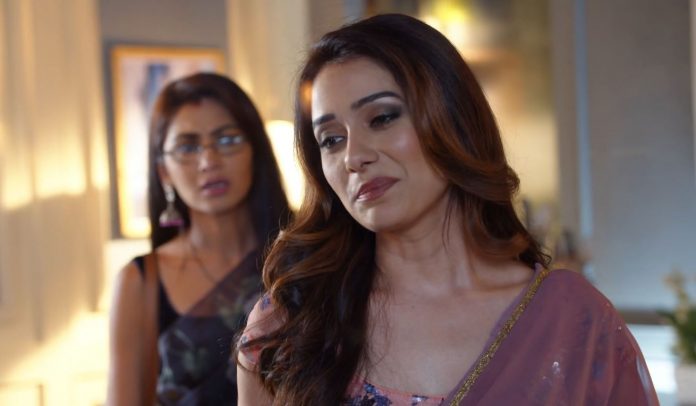 Kumkum Bhagya Pragya warning fall Upcoming 23rd April 2021 Abhi and Pragya have the separation of the long dark night. He makes a wish to just see her face when he wakes up. His wish gets fulfilled when she meets in the morning and wakes him up. He smiles seeing her. She tells him that she got breakfast for him. He asks her how does she get so much courage. She tells him that she would always love him. He wishes that she wakes him up every day by her beautiful smile. He wants to get free from the jail so that he can spend his life with her.

She tells him that she has a meeting with the lawyer, she will prepare the defense. She also wants him to come home soon. She tells him that she is also tired of their life’s problems. She meets the lawyer Verma. She tells about her husband’s case. Verma tells that his staff has got all the case details. She asks him to know the case’s reality. He asks her about Tanu’s accusation. Tanu reaches a news agency. She changes her look to get a helpless avatar. She meets the reporters and prepares for the fake interview to defame Mehra family, especially Abhi.

The reporter tells about Tanu, who has lost her respect because of Abhi. Tanu ruins Abhi’s name and fame by the ugly accusations. Tanu lies further to cook up a story. She reveals that Mehra family is troubling her, even Pragya’s daughter Prachi has threatened her. She also blames Rhea, who got against her. She tells that she will fight against Mehra family so that girls don’t get cheated. She tells that she wants to change the society and win the battle. She seeks the public support.

Ranbir tells that Prachi can never threaten anyone, Tanu is trying to gain fake sympathy. Pallavi asks Ranbir where is he going. He tells that he will keep an eye on Tanu. The reporter asks Tanu not to drag Abhi’s daughters in the matter, since it can ruin their future. Tanu asks the reporter to encash the story and support her. She tells that she is giving good business to the news channel. Verma tells that he wasn’t aware that Pragya is Abhi’s wife. He shows how the people has lost faith in Abhi after the rape charges.

Pragya tells that Tanu is trying to defame Abhi. Ranbir keeps an eye on Tanu. He finds her falsely crying to get sympathy. He wants to expose the truth that she is playing the victim card for her convenience. He wants to be with Tanu like her shadow until he proves her wrong. Aaliya meets Abhi and makes an apology. She blames herself for getting Tanu home. Abhi forgives her. He tells her that Pragya has changed him into a big-hearted forgiving person. He doesn’t want to spare anyone who is against Pragya.

She tells him that Tanu had blamed Pragya for the mess. He tells her that he lives for Pragya, not Tanu. He asks her if she had misbehaved with Pragya again. He wants to know if she asked Pragya to leave the house. Rhea meets him at the instance when Aaliya gets speechless. Rhea misses Abhi a lot. Abhi tells that he will come out free soon. Rhea tells that the entire family is helping Pragya. Aaliya adds that Pragya is with them, she will support her this time. Verma shows Tanu’ interview to Pragya. Pragya tells that Tanu is lying.

Moreover, Pragya confronts Tanu for her move Tanu tells her that she will ruin Abhi and his entire family. Pragya learns Tanu’s revenge plans and warns her. She feels helpless on not finding any suitable lawyer for defending Abhi. Tanu poses more troubles for Abhi. How will Abhi and Pragya win this time? Comment your views. Keep reading.

Reviewed Rating for Kumkum Bhagya Pragya warning fall Upcoming 23rd April 2021: 3/5 This rating is solely based on the opinion of the writer. You may post your own take on the show in the comment section below.