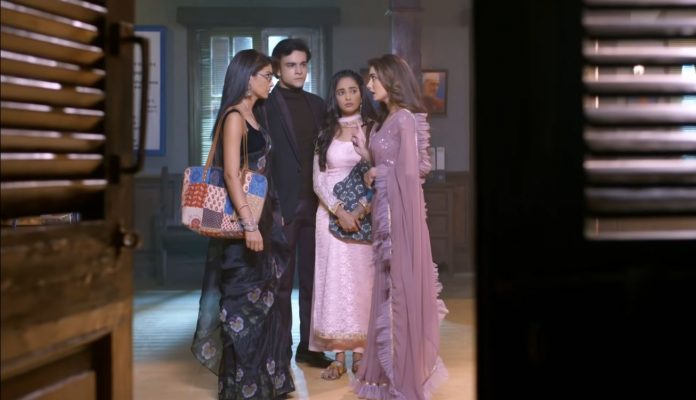 Kumkum Bhagya Pragya superb twist 28th April Update Ranbir tells Prachi that they have to steal everything crucial from the cabinet. He asks Prachi to help him in the robbery plan. They don’t get anything there. The theft alarm rings. They get worried that the alarm would get them caught. She asks him to switch off the power to stop the alarm from ringing. She guides him to the fuse room. He switches off the power. The alarm gets off. Ranbir and Prachi realize that they can’t find anything important in the darkness.

He wants to switch on the power again. He is sure that alarm won’t ring again. He is relieved when the alarm doesn’t ring. Ranbir tells that alarm is ringing since Tanu is hiding something really serious. He wants to find out who is it. Prachi assists him. On the other hand, Pragya cries when Raghubeer refuses to fight the case. He tells her that he didn’t fight any criminal case before. She tells him that she wants him to fight the case and win, since he fights for justice. He apologizes to her. She asks him if he would not try if his son was trapped in Abhi’s place.

She encourages him to do his best and save Abhi. She knows that he wants the truth to win, but doesn’t want to fight. She mentions that Tanu wants revenge on Abhi, she has falsely accused Abhi, she admitted her evil conspiracy in front of her. She tells that Abhi is innocent, still he is facing a tough time. She wants him to try to win the case. She finally convinces Raghubeer for fighting the case.

Raghubeer asks Pragya to tell Tanu’s intentions and motives. Pragya is grateful to him. Ranbir and Prachi look for something that could help them. She tells him that its a proof against Abhi. She gets a pendrive. Ranbir tells that the pendrive will have all the proof. She asks him to look for laptop. Meanwhile, Pallavi tells Rhea that Ranbir was upset seeing the news, he loves Abhi a lot, he left from the house. Rhea tells that Ranbir fought with her for Abhi’s sake, she is glad and liked his take. Pallavi is happy to get understanding Rhea.

Ranbir wants to speak to Vikram to get his help. He calls Vikram and informs about his arrest. Ranbir and Prachi get hurt in the lockup. He worries for Prachi. He finds her crying in pain and cries as well. He tends to care for her. He makes an earnest apology that she got arrested by his mistake. She tells him that she had come there by her wish, he shouldn’t blame himself. Pragya reaches the police station to meet Prachi. She hugs her daughter. Prachi tells that she went there for her parents’ sake. Pragya doesn’t want her to take risk.

Ranbir defends Prachi. He adds that he went there for Abhi’s sake, he got a proof as well. He tells that he had seen the unedited video, Tanu is manipulating the video to present it in the court. He apologizes for getting Prachi into trouble. Pragya feels proud seeing his love for Abhi. He tells her that they should get the original video somehow to prove Abhi innocent. Pragya tells that she will save Ranbir and Prachi.

Tanu threatens Pragya that the fire of her revenge will burn the entire family. She challenges Pragya. She tells Prachi that Pragya is sensible and already knows that she will be defeated. Pragya takes up the challenge. She decides to snatch the evidence from Tanu. Pragya is confident that Abhi will be proved innocent and come home after the court hearing. What will Pragya do in her husband’s favor? Comment your views. Keep reading.

Reviewed Rating for Kumkum Bhagya Pragya superb twist 28th April Full Update4/5 This rating is solely based on the opinion of the writer. You may post your own take on the show in the comment section below.