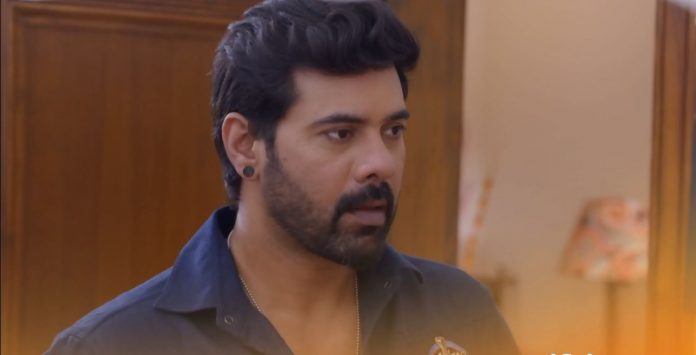 Kumkum Bhagya 18th May 2021 Written Update Call for Abhi Aaliya doesn’t want the marriage to happen. She vents anger on Tanu and pushes her away. Abhi and Pragya can’t stop Aaliya directly. Ranbir realizes that Abhi and Pragya are planning something. Pragya asks Rhea to take Aaliya away. Aaliya tells that she will not tolerate Tanu, Abhi has accepted defeat. Baljeet tells that Abhi and Tanu’s marriage will happen. Aaliya yells at her. Ranbir wants to find out the truth. He goes to ask Prachi. Abhi and Pragya have a laugh seeing the drama. Aaliya tells Rhea that she will teach a lesson to Tanu.

Rhea can’t lie to her. Aaliya asks her if she is hiding something. Rhea tells her that its a plan to trap Tanu. Aaliya promises that she won’t stop them. She gets upset that Abhi didn’t share his plan with her. Ranbir asks Prachi to tell him what’s happening, if Abhi and Pragya are planning something. Prachi doesn’t want to reveal the plan. They land up into a moment while arguing. Ranbir and Prachi threaten each other of Rhea. He wishes Prachi ends her pretence and comes up with the truth. Prachi tells him that Pragya had planned to trap Tanu and buy some time, Baljeet had acted as per their plan, they want to free Abhi from the case.

Aaliya tells Abhi that she didn’t know anything, Baljeet was performing his Roka with Tanu, she was just helpless to just watch it and not be able to do anything to stop it. Abhi tells her that he had let the Roka happen because it was just a plan. Aaliya confronts him for not making her part of his plan. She asks why wasn’t she informed about the plan, does he not trust her, does he think that she is still Tanu’s friend and would fail their plan.

She gets upset that she wasn’t with him in his trustworthy team. Abhi knows that he has done wrong to hide the plan from Aaliya. He adds that he was going to tell her everything, but things just rushed. He asks Aaliya not to get upset and join him when she is aware of the plan now. He convinces his sister with love. Aaliya still holds a grudge against Pragya, who didn’t involve her in Abhi’s rescue plan.

Later, Pragya gets stressed when Tanu calls them for an urgent meet at her home. She wonders if Tanu got to know about their plan. She doesn’t feel right about it. She tells that Tanu shouldn’t sense their planning, else Abhi’s rescue mission will backfire, he may land in more serious troubles. Abhi and Aaliya calm down Pragya, and say that she is overthinking. Aaliya tells that Tanu isn’t so sharp, she is stupid. Abhi asks Pragya to meet Tanu and find out the reason for the call.

Prachi reveals Abhi and Pragya’s plan to Ranbir. She tells him that its a trap for Tanu, just Aaliya and Mitali didn’t know about it. He learns the entire plan. He tells that he already knew about this. Ranbir and Aryan ask Abhi why did he not tell them about the plan. Abhi tells that he didn’t agree to the plan, but Pragya and their daughters convinced him, the plan had already executed.

Abhi wishes he had a son like Ranbir, who would take his side. Ranbir tells that he will be a good son for Abhi, but he will take Pragya’s side always. Rhea finds Abhi happy after a long time. Baljeet brings Tanu to her room to gift something special in return for Tanu’s faith. He gifts the bangles to Tanu to fool her. Tanu thinks Baljeet got blinded by her love for Abhi. She gets happy that she is getting everything that actually belonged to her. She thinks Baljeet made it possible for her.

Abhi overhears their conversation. He intervenes. Tanu feels her love story is amazing. Abhi and Baljeet are happy that Tanu didn’t doubt their plan. Baljeet blesses Abhi to be happy with Pragya. She wishes to get rid of Tanu. Abhi and Pragya spend some good time. Pragya makes prayers for Abhi. He tells her that she is a Devi for him, who always saves him. He dances with her. He tells her that music is playing in his mind.

He tells that Pragya will always protect him from problems. Aaliya thanks Pragya and asks her to assure his freedom. She offers help. Pragya tells that the entire family will be protecting Abhi this time. Sarita calls Pragya and goes hyper after seeing Abhi and Tanu’s Roka news. She asks Pragya what’s happening, why is Abhi hurting her. Pragya asks her to calm down and not misunderstand. Sarita doesn’t want to tolerate anything wrong. She didn’t expect this from Baljeet. Pragya tells Abhi that Sarita is too worried about the Roka, she isn’t listening. Abhi takes the phone to speak to Sarita.

Sarita tells him that she will save him from Tanu. He tells that he wants to meet her. She asks him to get Pragya along. He promises her. Abhi tells that they will meet Sarita and explain her everything with love. Abhi, Pragya and Prachi meet Sarita. Sarita panics. Abhi enjoys the drama. He gains Sarita’s sympathy.

Pragya explains that they have fooled Tanu by their drama, they have to get evidence from Tanu. Abhi explains the entire truth to Sarita. Sarita gets relieved that Abhi is still devoted to Pragya. Abhi tells that he will get Tanu jailed, he just wants an evidence. Sarita tells that they can win together, Tanu is a liar, she will lose for sure. She blesses them.

Reviewed Rating for Kumkum Bhagya 18th May 2021 Written Update Call for Abhi3/5 This rating is solely based on the opinion of the writer. You may post your own take on the show in the comment section below.