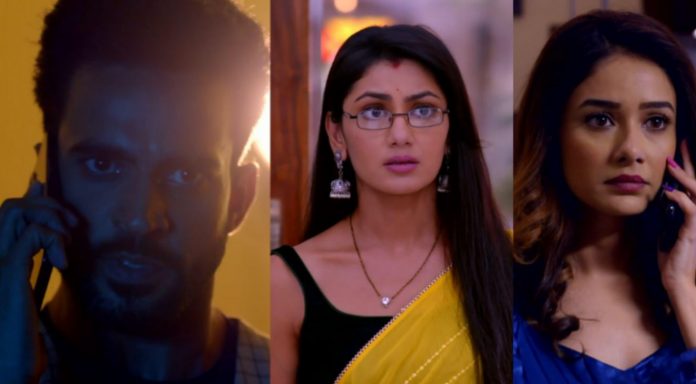 Kumkum Bhagya 19th May 2021 Written Update New entry Tanu gets a call from a mystery man Pradeep, who blackmails her. He tells her that he just wants his money. He doesn’t want to give her more time to repay. He threatens to increase her problems. She wishes to marry Abhi soon and get his money to clear her debts. Abhi and Pragya share a romantic moment to enjoy their marital bliss. She tells him that there is no proof of their marriage. He tells that he has a marriage certificate for their defense. She gets glad to know that her marriage is certified.

Tanu arrives home to meet Abhi and Baljeet to fix the marriage date soon, in order to get his richness soon to pay Pradeep. She gets Pradeep’s call once again. Pragya suspects Tanu’s behavior and hides behind a tree to hear Tanu’s phone conversation. She realizes that someone is blackmailing Tanu for money. She hears Tanu’s assurance to the man that she is sorting out things at her level best, he just needs to keep some patience to get his money.

Pragya thinks Tanu is in a big problem, and maybe she is targeting Abhi to get financial security. Tanu asks Pradeep not to call her again, since she has come to meet Abhishek Mehra. Pragya thinks if it will be good to make a deal with Tanu to free Abhi by stating that she will keep her secret under wraps. She decides to not divorce Abhi, and find out who is the blackmailer in Tanu’s life. She thinks Pradeep is Tanu’s crime-partner.

She wants to expose Tanu, Pradeep and their evil intentions. She plans to reach Pradeep and find out Tanu’s crime for which he is blackmailing her. Meanwhile, Tanu meets Abhi and tells him that they are going to get married. She wants to hug him and asks him not to run away from her. Abhi wishes Pragya comes to save him. Pragya interrupts Tanu and asks her not to cross her limits. She adds that Abhi is her husband. She taunts Tanu for always losing in front of their strong love. She mentions that its impossible for anyone to separate Abhi and her.

Abhi feels proud of Pragya. Pragya tells that they will always win because they are together. Tanu tries to hurt her, but Abhi stops her from doing so. He warns Tanu and shoves her away. Tanu asks him is he fulfilling his duties towards Pragya whom he is divorcing. She reminds him that he will be her husband soon and she expects him to fulfill his duties towards her as well. Tanu lands up in between Rhea and Aaliya’s argument. She learns that the marriage is just a deal and agrees with it. Aaliya gets relieved that Tanu didn’t hear about the family’s planning. Will Tanu learn about Abhi and Pragya’s plan and defeat them? Keep reading for more quick updates.

Abhi doesn’t want Pragya to cry. He asks her not to worry for anything. She tells him that she had no proof of their marriage, she couldn’t give an answer to anyone before. He tells her that he got well now, he is the biggest proof of their marriage. He doesn’t want her to get emotional. He pacifies Pragya. Tanu arrives and meets Baljeet. She gets happy to receive compliments.

She sees Abhi and acts romantic to make him recall her touch. He asks her to get away from him. She tells him that they will be husband and wife soon. She asks him not to act alienated. Pragya reprimands her and slaps as a reply. Tanu worriedly wakes up from the nightmare. She doesn’t want Pragya to raise hand on her. Meanwhile, Ranbir and Prachi help each other in kitchen and recall their good old times. He loves the sandwich prepared by her. He tries to make her confess love to him. Prachi doesn’t give in to his request.

They have a moment there, which breaks because of Rhea’s sudden entry. Rhea tries to show them the limits of their relation. She asks Ranbir to talk to Pallavi. Rhea romances Ranbir in front of Prachi to make her jealous. She confesses love to Ranbir, making it more awkward for Ranbir and Prachi. Ranbir excuses himself. He finds Prachi crying. He tries to get answers for her strange behavior. He tells that she was running away to hide her feelings, but he has sense it that she is feeling bad, she loves him and she is meant for him.

She wishes to tell him that he is the only person in her life, he is her first and last love. He asks her why is she doing this with them. He wishes that she tells it once that she loves him. He tells that he didn’t go away from her, he is ready to forget everything and come back to her once she admits that she loves him. He swears that he will handle everything, every problem that has made them separated.

In next scene, Tanu finds Abhi and Pragya together. She asks Pragya not to be with Abhi again. Abhi tells that Pragya is his wife. Tanu tells that she will be becoming his wife. He tells that he is tolerating her for Baljeet’s sake. He reveals that he has spent time with Pragya and decided to not listen to Tanu. He knows about Tanu and Pragya’s deal. Pragya tells that she won’t give her Kumkum to Tanu, she will expose Tanu’s truth, Tanu will just receive hatred from everyone. She threatens Tanu. Tanu tells that Abhi is just of her. Abhi and Pragya ask her to get out of their house. This happens to be another nightmare of Tanu.

Tanu tells that Pragya will create problems for Abhi and her. She feels threatened by Pragya. She wants to end Pragya’s love story to not let the history repeat itself. She calls up Pragya to rebuke her. Pragya gets worried that Tanu maybe suspecting her plan. Tanu ruins Pragya’s sleep by giving her missed call. She doesn’t want to feel scared. Prachi doesn’t tell Ranbir that she loves him.

She thinks he has gone too far from her. She adds that she doesn’t love him, she isn’t made for him. He tells her that he can see her feelings in her eyes, she loves him, she will soon miss him in her life. He adds that he is ready to do anything for her because he loves her, but when he marries Rhea, he will just be of Rhea and not cheat her. He asks Prachi not to get late in her confession. Will Prachi confess her real emotions to Ranbir? Keep reading.

Reviewed Rating for Kumkum Bhagya 19th May 2021 Written Update New entry3/5 This rating is solely based on the opinion of the writer. You may post your own take on the show in the comment section below.