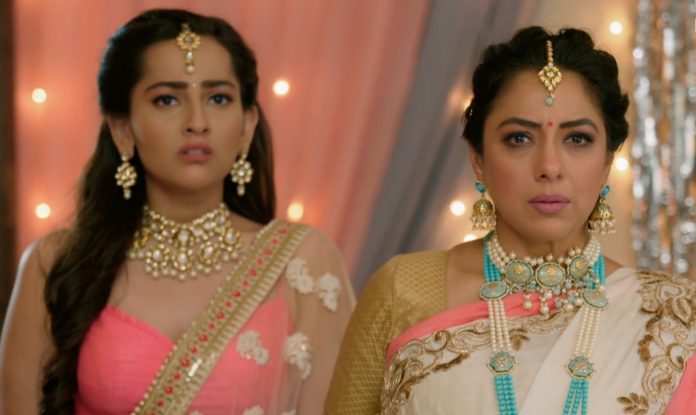 Anupama 21st May 2021 Written Update Fury breaks out Samar apologizes to Leela who is much upset because of his blunt behavior. Leela wants to leave from the function. Samar, Paritosh and Pakhi stop Leela. Anupama tells that it was her idea. Leela vents anger on them and then melts her heart. She tells that she will get ready for Samar’s engagement.

Anupama doesn’t care if Leela gets angry on her, since she loves Leela a lot. She pleases Leela with her talks. The family gets happily dancing to celebrate Samar’s happiness. Advait comes on Anupama’s invitation. Kavya asks Vanraj if he is shocked or jealous. Vanraj tells that he isn’t jealous at all. Anupama blesses the couple. She is happy for her son. Anupama and Vanraj happily dance as Samar’s parents, leaving Kavya jealous again. Nandini feels bad to hide the big truth from Samar’s family.

She wants to tell Anupama the truth. She feels guilty to hide the truth. Samar doesn’t want Nandini to spoil things by spilling the truth. Nandini takes Anupama with her to end her guilt. She apologizes to Anupama. She breaks out the truth of her accident, due to which she can never conceive. Anupama and Leela are much shocked to know about Nandini’s accident and medical condition. Nandini tells Anupama that she wanted to tell the truth to her since a long time, but Samar stopped her.

She doesn’t want to complicate things further. She asks Anupama to decide about Samar and her relationship. She wants to know Anupama’s decision, if her truth matters to Anupama over their relations. Leela rages on knowing this critical truth. Nandini mistakes Anupama’s anger. She apologizes to Anupama. Anupama didn’t expect her to make such an unexpected confession on the engagement day. Leela stops Samar’s engagemnt right away. Vanraj asks Leela if things are fine.

Leela manipulates the matter to tell Vanraj that Anupama has hidden the big truth of Nandini’s medical condition. The family is shocked to know that Nandini can never conceive. Anupama doesn’t think its Nandini’s mistake, Nandini didn’t write her own fate, she is a victim in the accident. Nandini gets Anupama’s support. Anupama tells Nandini that they will tell the truth to the family and solve the matter. Leela asks Kavya if she didn’t know the truth.

Kavya swears on Vanraj that she didn’t know anything. Samar tells that Kavya has no idea about Nandini’s weakness. Leela rebukes Kavya. She doesn’t want to accept Nandini for Samar. Vanraj gets angry on Anupama once again, stating that she has hidden the truth. Samar defends Anupama, who just got to know the truth. Anupama neutralizes Samar and Vanraj’s argument. She supports Samar and Nandini’s relationship. Leela and Vanraj get against Nandini.

Reviewed Rating for Anupama 21st May 2021 Written Update Fury breaks out3/5 This rating is solely based on the opinion of the writer. You may post your own take on the show in the comment section below.