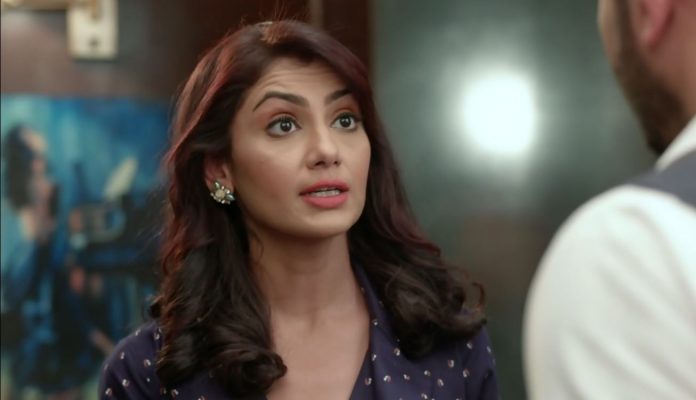 Kumkum Bhagya 29th June 2021 Written Update Pragya strikes Pragya suspects that Gautam Thapar had sent someone to steal her purse, in order to get the property documents. She had heard his dad making this plan. She tells him that he can’t lie to her now, she is very sure that he is behind the theft. Gautam defends himself that he didn’t send anyone to steal the papers, he was actually against his dad’s plan. He doesn’t want to upset Pragya. Pragya tells him that if he doesn’t confess, then the police will find out the thief and the truth as well.

Inspector checks the cctv footage of the mall. He finds Tanu stealing the bag. Constable tells that he knows Tanu well, she also lives in the same chawl where he lives. He adds that he knows her house number, he can take him there. Inspector informs Pragya that he got to know about the thief. He tells that he also got the address of the thief. Pragya asks him to send the address to her. She wants Gautam to accompany her and meet the thief himself. She wants Gautam to face his aide. Pragya wants to talk to the thief and get Thapar’s truth out.

She tells that the thief will tell the truth to the police, and then Thapars will be gone. Pragya gets to see the cctv footage and finds Tanu in it. She asks the Inspector to arrest Tanu. She wonders how Tanu reached her and stole her purse to trouble her.

Pragya gets a chance to get Tanu behind bars. She thinks Tanu has done many crimes and has to pay a big price, but to start with, Tanu should get arrested for the theft. She plans to get Tanu imprisoned for the murder attempt. She has lost everything to Tanu, Abhi, and also her daughters. Strangely, Pragya had returned to the city, but didn’t think once about Rhea and Prachi. She gets focussed on her revenge. Keep reading.

Sushma wants to use her sources to get to know about the car thief. Pragya tells that she knows the thief, she will herself handle the matter. Ranbir arrives home and expects a warm welcome from Pallavi. He meets his Dida and hugs her. Pallavi gets to see Ranbir in her house. She didn’t think he will come to see Vikram. Dida tells him that Vikram is recovering now. Pallavi gets upset that Ranbir left the house for Prachi’s sake.

Dida asks him to meet Vikram and take his welfare. Pallavi instructs him to not give any kind of stress to Vikram by talking anything unfavorable. Ranbir assures that Vikram will soon recover. Siddharth meets Pallavi. He tells her that Ranbir was with him when he got her call informing about Vikram’s condition. Pragya meets the Inspector to file the FIR about the robbery. She tells that she was carrying important property documents. Inspector asks her if she suspects someone. She complains about the suspects, Thapars.

Gautam is informed about Pragya’s arrival. Soon, she reaches Thapars and accuses them for the theft. She tells Gautam that her purse got stolen, they were planning to steal the factory papers, hey had sent someone to steal it. She accuses them further. Inspector gets hinted about Tanu by following the cctv evidence. Pragya gets informed that the police has found the thief. She asks Inspector to find out who had sent the thief to get the important documents. Gautam defends himself. Pragya asks him to be ready to know the thief’s statement against him.

Gautam tells his dad that Pragya’s reaction is natural, since she had heard their planning to get the factory papers. His dad is certain that she will realize her mistake and come to apologize to keep their partnership on. Ranbir gets emotional on meeting Vikram. He wants Vikram to get well soon. Vikram wants Ranbir to be with him. He forgives Ranbir for leaving. Siddharth tells that he so wanted to see Vikram and Ranbir’s union.

Pallavi feels Prachi has broken their happy family, both Vikram and Dida would be longing for Ranbir again. Vikram asks Ranbir to stay with him from now on. Ranbir assures that he will stay back. Pallavi knows that Ranbir loves Prachi and chose her over the family, he will go back to her. She tells that Ranbir will never listen to them. Siddharth cancels his meeting to stay with Vikram. Vikram asks Siddharth to go, Ranbir is with him to look after him. Siddharth is sure of Ranbir’s caring side.

Aaliya finds Tanu with an expensive purse. She questions her about it. Tanu lies that its not an original brand. Aaliya wants to know if Tanu had really stolen it. Abhi makes fun of Tanu and her poverty days. He tells Aaliya that they all are equal now, they are poor. Tanu asks Abhi to stop crossing limits. Abhi rebukes her for the theft. He tells her that police will arrest her some day. Pragya and the cops reach the chawl to confront Tanu. Siddharth tells Dida that he is leaving because Ranbir has returned home. Ranbir tells that he can’t see Vikram sick. Pallavi doesn’t talk to Ranbir.

She stays upset with his decision of leaving the family for Prachi. Dida wishes Ranbir and Pallavi talk and end their differences. Pallavi tells that Vikram felt glad seeing his son, he really missed his son. Ranbir tells that he also missed his family. Pallavi asks Ranbir is he staying in the same chawl. She regrets that he didn’t marry Rhea. Pallavi tells Ranbir that she had seen his house, where he lives a poor life.

She adds that he missed the luxurious life and also the family because of Prachi. She blames Prachi for breaking their relations. He reminds that she had ousted them from the house. She asks him to keep meeting Vikram and come to stay if he wants, but he shall come without Prachi. She tells him that he can end his struggling life by becoming her son again, he may return home but without Prachi.

Ranbir tells that he will always have the same identity and relations. She adds that Rhea was her first choice, she never liked Prachi. He rejects the luxuries once again. He chooses Prachi and his happy simple life. He taunts Pallavi for not living happy even after ousting Prachi and him. Pragya informs Sushma that she has come to meet the lady who was sent by Thapars. She wants to answer the Thapars. She asks Sushma to never have blind faith on any man. She walks into the chawl house to confront Tanu. A huge shocker awaits her. Pragya gets Tanu arrested.

Reviewed Rating for Kumkum Bhagya 29th June 2021 Written Update Pragya strikes: 5/5 This rating is solely based on the opinion of the writer. You may post your own take on the show in the comment section below.