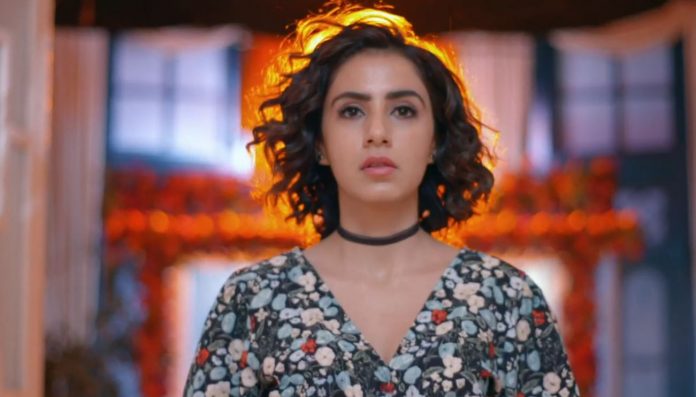 Kundali Bhagya 16th July 2021 Written Update Mahira enters Kareena questions Sherlyn, who tells her that she shouldn’t get Kritika married to Prithvi. Prithvi’s mum worriedly apologizes to her. Sherlyn tells Kareena that she didn’t know that Prithvi’s mum will apologize to her. Kareena is confused. Prithvi clears the confusion. He tells that Sherlyn is undergoing an emotional turmoil, she got into an argument with his mum. He is thankful that Sherlyn has forgiven his mum, who had hurt her heart.

Kareena tells that Sherlyn never hurts anyone’s heart, she is emotional disturbed at this time. Kareena asks them to sort the issues and come for the wedding. Bani tells Kareena that Karan and Preeta have promised Rakhi to give a heir to the family. Kareena finds it a good news. Rishabh and Karan pulls each other’s leg. Karan and Preeta get into a sweet moment where they get a garland into their necks. Bani and Kareena get happy seeing them, expecting them to give a good news soon. Preeta gets shy seeing the elders watching.

She tells that Prithvi was the father of Sherlyn’s child, he is cheating Kritika. Sameer tells that they know everything, but they have no proof, they can’t stop the marriage, they have to let it happen. She calls him a coward. She shouts on him. She dreams of yelling at him. He wants to know what is troubling her. Shrishti knows that he won’t help her, as she imagined. She tells Sameer that she wants his help. She feels strange. She asks Sameer to take her to the hospital. She wants Dr. Roshni to tell Sherlyn’s truth to Sameer. She plans to get Dr. Roshni home to uncover the truth and expose Prithvi’s true face. Rishabh and Karan meet their parents and advice them to hug their happiness. He asks them to come with a happy mood. Kritika meets them and gets emotional. She tells Mahesh and Rakhi that they are like her parents. She requests them to bless her in the marriage. Mahesh and Rakhi cry for her. They hug Kritika. Karan is impressed with her dialogues. Kritika tells that she loves her brothers as well. She tells that Preeta has given her this idea to cheer up Mahesh and Rakhi.

Karan is glad to know that Preeta is concerned for the entire family. Kritika tells that Preeta is never wrong. Rishabh adds that he knows it very well. Prithvi reaches the mandap. Kareena sends Preeta to bring Kritika to the mandap. Soon, Kritika arrives. Karan feels love for Preeta. He applauds her for her lovely gesture. Sarla enquires about Shrishti. She asks Janki to call up Shrishti. Sameer takes Shrishti to the hospital who rushes to meet Dr. Roshni. Shrishti acts weird to fool Sameer and take him to Dr. Roshni.

Sameer suspects her planning. He informs Janki that he brought Shrishti to the hospital. He misunderstands Shrishti. He gives the news of Shrishti’s pregnancy. Janki is left shocked. Mahira barges into the Luthra house to stop Prithvi and Kritika’s marriage. She gets a gun along with her. Sherlyn spots Mahira and takes her away before anyone else sees her. Janki doesn’t know how to tell Sarla about Shrishti’s pregnancy. Sameer asks Shrishti what is she up to. She runs after Dr. Roshni. Sherlyn asks Mahira not to make any mistake.

She asks Sherlyn why did she do wrong with her. She threatens to get Sherlyn and Prithvi ousted from the house. She further stops the marriage. Shrishti succeeds to bring Dr. Roshni home. Dr. Roshni reveals Sherlyn’s truth in front of the family. Will this be the end of Prithvi and Sherlyn’s crime conspiracies? Comment your views and keep reading.

Reviewed Rating for Kundali Bhagya 16th July 2021 Written Update Mahira entry: 4/5 This rating is solely based on the opinion of the writer. You may post your own take on the show in the comment section below.