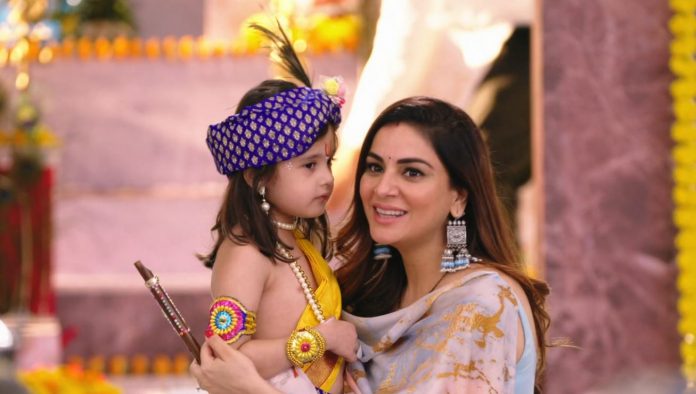 Kundali Bhagya 4th September 2021 Written Update Pihu entry Prithvi fools Kritika and excuses himself to answer Sherlyn’s call. Sherlyn apologizes for hurting his ego. He asks him where is he. He tells that he is busy in work. She asks him if he is with someone. She hears Kritika’s voice. She asks him if he is in Kritika’s room. She tells him that she will make a video call to him and find out. She asks him to answer the call. Prithvi doesn’t want to catch him. He doesn’t know where to go and talk. Kritika leaves the room. He thinks to hide behind the curtain and talk to Sherlyn. He gets saved when Rakhi interrupts Sherlyn’s call.

Rakhi asks Sherlyn to help Preeta in the Janmashtami preparations. He feels he got saved. Rakhi likes the decorations done by Preeta. She explains Sherlyn about Krishna Abhishek. Sherlyn tells that she knows everything, she will handle the work well. Rakhi is glad seeing her bahus handle the work. Preeta gets upset that a baby isn’t coming in their lives. Karan finds her sad. She tells that she thought they will have their own Kanha, but its not going to happen.

Karan tells Preeta that they are also naughty like kids, they need to give some time. Preeta knows that even Karan has pain in his heart. Karan doesn’t want both of them to fall weak. He pretends strong and bears the pain within. He doesn’t want to show his pain to anyone. Preeta makes an earnest prayer that a Kanha makes her Yashoda, that she gets a Bal Gopal. A little girl Pihu enters the house when Preeta makes a prayer.

Preeta and Karan find the girl running in the house. They try to get a glimpse of the cute girl dressed as little Kanha. Preeta gets much glad meeting the girl. Karan also expresses his happiness. Preeta learns about Pihu. Pihu asks them to find her. She runs away and hides. Karan and Preeta play with her. Rakhi meets Pihu. She tells Pihu that she is Rakhi. Preeta tells that Rakhi is Karan and her mum. Karan asks Rakhi who is Pihu. Preeta asks Pihu to come. Pihu asks for food. Preeta takes her to the kitchen to feed her.

Rakhi gets happy seeing Preeta and Pihu’s bonding. Sameer asks the family about the girl. Kareena tells about her orphanage friends. Pihu’s arrival brings happiness in the Luthra family. Pihu doesn’t like sweets. She asks for simple food. Karan feels an attachment with Pihu. She imitates him.

Karan and Preeta observe her and have a laugh. Preeta feeds hungry Pihu. She gets emotional. Pihu asks her why is she crying. Preeta tells that its tears of happiness. Kareena tells Sameer that Karan and Preeta are ready for adoption. The orphanage ladies find Pihu happy with Karan and Preeta. Pihu tells Preeta that she doesn’t have a mum.

Preeta asks her if she is upset with her mum. Karan attends Pihu. Rakhi asks Karan and Preeta to sit for an important talk. Bani asks them about Pihu. Preeta tells that Pihu is really cute, her parents would be lucky to get her. Bani tells that Preeta is the lucky one, Pihu is her daughter from now.

Karan and Preeta get glad that the family has chosen Pihu as the adopted child. Kareena tells that orphanage ladies have also agreed for the adoption. Sherlyn doesn’t want this adoption to happen. The orphanage lady asks Karan and Preeta to complete the formalities to get the adoption process done as soon as possibilities. Karan and Preeta get overjoyed that they will be getting a daughter. The family gets super happy to welcome Pihu in the Luthra house. Who is Pihu? Is she Sonakshi’s abandoned daughter? Do you like Pihu’s entry in the track? Is the adoption track better than the surrogacy track? Express your views and keep reading.

Reviewed Rating for Kundali Bhagya 4th September 2021 Written Update Pihu entry: 5/5 This rating is solely based on the opinion of the writer. You may post your own take on the show in the comment section below.