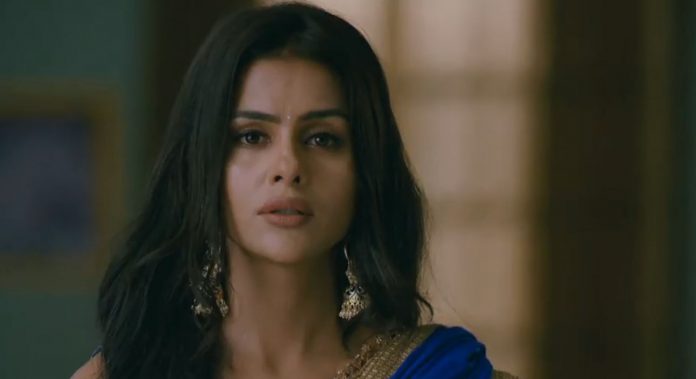 Udaariyaan 4th September 2021 Written Update Tejo’s big move Tejo returns home with the dreams shattering in her eyes. She recalls the way Fateh pretended to move on over Jasmin’s chapter by seeking Tejo’s help. She really believed that Fateh got over Jasmin’s chapter and genuinely wants to move on. She fell in his innocent drama. Tejo realizes the lies he told her, whenever he had gone to meet Jasmin. She also realized that both Jasmin and Fateh are equally at fault, because even Jasmin had hidden the big truth that she is still seeing Fateh, she is still in love with him and is secretly meeting her.

She feels hatred for herself that she got cheated by her loved ones. Jasmin’s truth comes to the fore. Tejo realizes how Swaroop and Gippy warned her about Jasmin, who is eyeing Fateh even after his marriage. Tejo regrets that she didn’t realize the truth before, and became a big fool. Tejo cries over Fateh’s deceive all the night. She makes a decision to confront Jasmin and Fateh. She wants to test her fate by the trial.

She tells Fateh that he can’t make work excuse, since the matter is really important. She summons both of them for a meeting, only to confront them for the truth. Tejo acts suspicious with her plans when she picks up a gun. She keeps Fateh’s cheat a secret at home. She doesn’t reveal the truth to anyone, and suppresses the sorrow. She wants an answer from Fateh and Jasmin. She can’t accept their deceive. What is Tejo planning to do? Will she threaten to shoot herself to make them admit the truth? In the coming track, Tejo will break her marriage with Fateh to keep her self-esteem, and also break her ties with Jasmin. Keep reading.

Tejo doesn’t tell Khushbeer about Fateh and Jasmin’s ugly truth, which she isn’t able to accept. She doesn’t want to tense the family until she gets her answers from Fateh and Jasmin. She misses Fateh a lot. She tells Khushbeer that she doesn’t know about Fateh, she didn’t speak to Fateh till now and doesn’t know his return timing. She cries for Fateh, that she really lost him forever. She awaits Fateh to confront him. She realizes how he lied to her and fooled her. She realizes that Jasmin also lied to her.

She recalls how Nimmo and Swaroop had tried to alert her about Fateh and Jasmin’s affair, but she stayed blinded by love and faith which Fateh never deserved. She breaks down. Fateh arrives home, unaware that his truth is known to his wife. She finds him shamelessly acting. She decides to confront him and starts narrating someone’s story. She tells that if she didn’t attend the party, then she would have missed a lot. Fateh tells that he enjoyed the party a lot, but nobody asked about her since it was just a boys party. She finds him lying once again.

She indirectly confronts him for cheating. She tells him that she had attended the party, which opened her eyes, she had seen a person who was married to her friend, but came with his lover, pretending that his lover is his wife. She tells him that the guy was so shameless that he was cheating on his wife. Fateh gets tensed on hearing Tejo’s words, which resemble Jasmin and his story.

Fateh gets speechless to answer her. She tells him that nothing can justify cheating, even if the society wants the wives to accept their husbands’ cheating and stay quiet. She doesn’t want to forgive Fateh for the cheat. She tells him that loyalty is important in a marriage. She takes his opinion to know why did he cheat her, by relating his truth with someone else’s matter. Fateh replies her that maybe that person’s wife was cheating him, maybe the woman broke his heart and he tended to cheating. He indirectly shares his doubts on Tejo and Buzo. Tejo controls her anger over his dirty thinking. She realizes that a cheating man suspects that his wife is cheating on him to justify himself. She pities his thinking.

Tejo asks Fateh what does he think about such a couple’s situation, where a husband is lying every day and cheating his wife. She answers that she knows that person’s wife well, she can never cheat him, she is an amazing wife who loves only her husband. Tejo doesn’t confront him directly, but adds that a man can never justify his extra-marital relationship by stating any reason.

Tejo feels so cheated, that she walks on the glass pieces and hurts her feet. She doesn’t feel any pain, since her heart is crying. Fateh wonders why is she speaking like she knows about Jasmin and him. She feels suffocated to share the room with Fateh, thinking of the way he cheated her and consummated their marriage, when he had no feelings of love for her. She rushes away to the terrace and weeps to pass the night, that’s killing her with Fateh’s thoughts.

Tejo is broken down. She feels she needs to confront Fateh and Jasmin together. She doesn’t meet him in the morning, while he goes to meet Jasmin. Fateh books Jasmin and his tickets for Canada. He surprises her. He tells her that very soon they will be taking a flight. Jasmin is really happy. They both don’t think of Tejo. Jasmin tells that their new life will begin. Tejo realizes that Fateh never belonged to her, he was always of Jasmin and she shouldn’t keep him in the unwanted marriage. She decides to break the marriage. She calls Fateh and Jasmin for a meet, and takes them at the point of the gun, after revealing their affair truth.

Reviewed Rating for Udaariyaan 4th September 2021 Written Update Tejo’s big move: 2/5 This rating is solely based on the opinion of the writer. You may post your own take on the show in the comment section below.