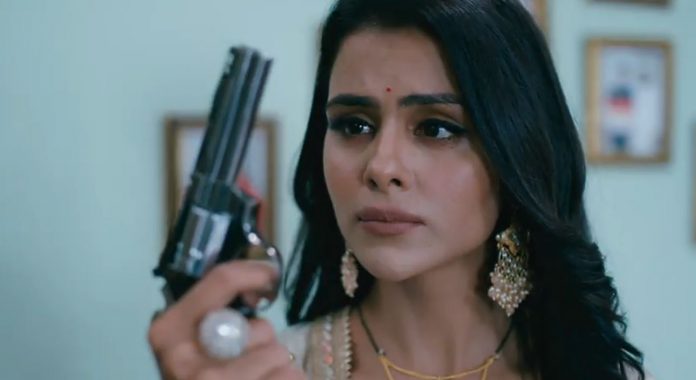 Udaariyaan 6th September 2021 Written Update Tejo shocks Fateh Tejo gets heartbroken by Fateh’s deceive. She never imagined that her husband who spends day and night with her is actually stabbing her back by his cheat. She never knew that her sister who always depended on her would be cheating her, by disrespecting their bond of twenty years. Jasmin has turned too insensitive. She doesn’t truly love Fateh, but is just obsessed to get him, because she can’t accept her defeat in love. Tejo feels worse than Jasmin. Tejo isn’t able to handle the pain of the heartbreak. She doesn’t want to face Fateh for a while.

His face reminds her of the huge number of lies which he rendered always to secretly meet Jasmin. She feels a wife worships her husband, but the husband isn’t worthy enough. Fateh’s mind doesn’t get clear that Tejo and Buzo aren’t in any illegitimate relation. He still regards Tejo wrong, and doesn’t think she deserves any explanation. He carries his fleeing plans ahead with Jasmin, unaware that Jasmin is so selfish that she is faking love just to win him.

Fateh really thinks Jasmin loves him so much, since she proved him by burning her passport, her Canada dreams. He promises to fulfull her Canada dreams. He isn’t aware of Jasmin’s clever games, that she burnt Rupy’s passport instead hers, just to fool Fateh to make him accept her love. Jasmin isn’t loyal to Fateh, Tejo or anyone in her family. Fateh still crazily loves Jasmin. Tejo decides to confront Fateh and Jasmin for their enormous cheat, knowing that the cheaters are justifying their cheat as their love.

Tejo makes a big decision, that’s to unite the deserving lovers. She doesn’t think Fateh deserves her. She wants to end their marriage and make Jasmin marry Fateh, thinking she came in between their love story. Tejo texts them the address and calls them at the isolated place for a big confrontation. She gets vengeful. Tejo’s sight with the gun shocks Fateh and Jasmin. Tejo first points the gun at Fateh and Jasmin, and then at herself, thinking she has become a problem for them. Tejo confronts them for their marriage pretence at the party, where they confessed love for each other.

Fateh and Jasmin are at the bigger shock’s end, knowing Tejo had attended the party and witnessed their romance as well. Fateh and Jasmin owe a big explanation to Tejo. How will Fateh and Jasmin defend their wrong relationship? Tejo will be uniting them to complete their love story, their Udaariyaan. Tejo moves back from Fateh’s life, thinking if his love is her fate, then nobody can snatch him. Tejo’s sacrifice and her goodness will be soon realized by Fateh, when Jasmin’s passport lie gets known. Also, Simran and Buzo’s love relationship will come to the core. Will Fateh realize his mistake after the two big revelations? Keep reading for further updates.

Fateh can’t get over the deceive, with flashes of Fateh and Jasmin disturbing her. She finally gets the gun from the drawer after facing a big inner conflict. She leaves from the house. Tejo picks Jasmin and Fateh on the way. She keeps the suspense high. She tells them that she has a big surprise for them. She doesn’t reveal much to them, and keeps a serious tone, leaving Jasmin and Fateh much tensed. Fateh enquires about the surprise. She asks him to keep patience, he will know everything.

She gets them to the secluded place and shocks them by revealing her surprise. They didn’t expect to show her dangerous side. Tejo reminds them of their cheap romance in the party by playing the audio clip of their love confessions made shamelessly in front of the world. Tejo confronts them at gun point, leaving them speechless and shocked. Tejo appears in front of them with the phone playing the recording and a gun in her hand. Tejo wants to do justice with them, thinking she had come between their love story.

She scares them by pointing the gun at them. They step back. Tejo speaks of the shock they gave given her by posing as husband and wife in the party. She tells that the shock was bigger than this shock. She confronts them for the open romance, their true love. Tejo tells Fateh that her husband and her sister cheated her, she would have left from their lives on her own if they told her about their love. She tells that she would have happily sacrificed her marriage for their sake. She is hurt that they cheated her.

She questions them about their affair and gets her answers at the point of the gun. She regrets that she trusted Fateh so much, but he couldn’t come up with the truth, he instead chose to lie to her and fool her. She tells him that Jasmin had rejected him, she denied to marry him, but it was just Tejo who married him and saved his family respect. She asks him why did he pretend to keep their marriage. She tells him that he has played with her emotions and heart.

She reprimands Jasmin for always thinking of Tejo’s belongings as her own. She tells that Fateh isn’t any belonging that Jasmin can snatch. Jasmin tells that Fateh was never of Tejo. Tejo angrily reminds that Fateh belongs to her since they are married. She shows Jasmin her right place. Fateh apologizes to Tejo, but she doesn’t forgive them. Jasmin tries to save her life first when Tejo threatens them.

Fateh stands to face Tejo. Tejo tells him that Jasmin cheated her sister, she can’t be loyal to anyone, not even Fateh. She tells him that he will soon regret that he left his wife for a selfish girl like Jasmin. Tejo runs away from there, leaving Fateh and Jasmin. Jasmin stops Fateh. She proves that she is selfish. She doesn’t care for her sister, and stops Fateh from going to Tejo. Fateh worries for Tejo. Tejo stays lost in herself and spares them, pitying that Fateh got Jasmin as his lover. Jasmin decides to tell the entire family about Fateh and her. Stay tuned for the next twists.

Reviewed Rating for Udaariyaan 6th September 2021 Written Update Tejo shocks Fateh: 2/5 This rating is solely based on the opinion of the writer. You may post your own take on the show in the comment section below.